Ben on the Rise 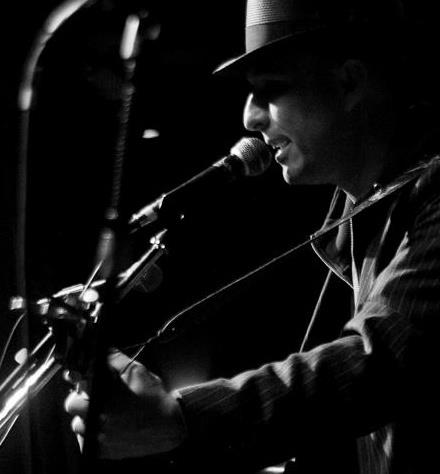 Ben Shannon was born in Nashville, Tennessee. He later moved to Pittsburgh, Pennsylvania where he became a writer. It was here as a young lad that his father gave him his first acoustic guitar and shortly after his mother surprised him with a knock off  Les-Paul electric with a Gorilla amplifier. His first song was "Hey Mr. Tambourine Man." Once he learnt the chords he started to make his own songs by sliding the pattern up and down the neck. It wasn't until the 9th grade after a returned trip from a youth-mission from Russia that he began to write in earnest.

Ten years later he was riding with a friend to meet up with the rest of his avant-guard noise rock band, Pledge Drive, and the song"Great Day To Be Alive" written by Darrel Scott came on the radio.Whether it was the driving Appalachian rhythm, the confessional lyrics, or the mountain melody on the hook, listening then he knew he wanted to write songs that had talked sense and had a something to say.

Along the way he learned some good lessons from his career hit writers, publishers, and record labels. He did a couple of years worth of gigging and vocal training before  he set out to work on the best damn record his ever wanted to hear. After years of fooling with recording equipment, bouncing around basements doing this piece and that piece, He found himself a studio with some time, taste, talent, and top-notch gear on hand. Next thing he knew money started flying through his hands and into the hands of very capable professionals. 16 songs tracked, 11 on album and  he is officially on the rise.Ben in the past has had many career highlights and shared the stage with; The Chapin Sisters, Paul Thorn, The Neville Brothers and Rusted Root.

Revolution managed to pull Ben out of his busy schedule to chat about his current writings and get scoop on what makes a good songwriter.

R. As a singer/songwriter where do you draw your inspiration?
BS. Sometimes I start to shake from excitement the moment I feel a new song come to me. But I know all too well that there are specific mental and emotional muscle groups that then get involved in cracking that new song open and organizing the ideas into a form I would like to sing. It can be  totally exhausting to get a song pinned down. Sometimes I have to beat it to a pulp pr cut it down to nothing to get back to the truth of it. The inspiration for me is not drawn from the moment of revelation or the conception of its form (although that is inspiring too). Most of my inspiration is dawn from the richness of my family, my work, and the accumulated experience of music, language, and culture that is my life.

R.You were originally born in Nashville, is it true that some of the greatest music comes from there?
BS. You mean Nashville music like Kings of Leon, Ben Folds, and Jack White, Gillian Welch? Seriously though, Nashville is home to a bunch of great non-country artists because it is one of those cities that lives in the imagination of the songwriting world. And, like New Orleans, New York, and LA it attracts talented people with a suitcase a bus ticket and a dream. I didn't have an appreciation of its mythological power until I became a student of songs and a songwriter. Early on I listened to my parents' massive record collection and six albums had me by the heart and soul.1.Steveie Wonder Songs in the Key of Life, 2.The Stones Let it Bleed, 3.Bach's Brandeburgh Concertos, 4. Jimi Hendrix Are You Experienced, 5.The Beatles The White Album, 6.The Beatles Let it Be. None of those were Nashville records. When I was a teen my favorite music was coming from Sugar Hill, Def Jams, and Dischord record labels none of which were Nashville based. But, then I became a student of the formal craft of songwriting and was drawn to the commercial country music of Nashville because the rules of song craft and form were so clearly spelled out. Just about every song was like getting a lesson in basic songwriting form.However, the best music out of Nashville has always been outlawed by Nashville-Outlaw Country. It was Haggard, Cash, Christopherson, and Nelson who bucked the political and religious pandering and the Lawrence Welk influenced Nashville sound of their day and now there are artists like Jamey Johnson and Hayes Carl and others that are carrying on that tradition with songs like
"High Cost of Living" and "KMAGYOYO."

R. Whats your view on whats happening musically today?
BS. As a listener I think I have access to more generations of artists than ever before. I have more filters which let through a more diverse stream of artists than ever before. So on a basic level I have the potential to become a more sophisticated and enriched listener. But that isn't what seems to be happening to me. i am turning into an isolationist-harder to please than ever before. As an artist I agree with John Mayer who said,"The best promotion is having great music."For some business models it seems like having great music isn't enough "To be a success one has to quit the jobs, go on tours to play x amount of dates to x amount of people, get x amount of hits on a website, network with industry insiders and play showcases at x music conferences, get mentioned on such and such bog. "Well, there is no guarantee for those artists that their time and money wasn't better sent on writing and making another great album. if like Malcom X said "Land is the basis for independence"then as an artists and as listeners we should be wary of giving up our "land." My artists "land" is the integrity of my musical legacy captured in recordings and performances. As a listener my "land" is my access to great music. This is why i think it is important to embrace my local music scene and public radio stations.

R. Who would you say is the most influential songwriter of this generation?
BS.Bob Dylan hands down. Although he's lost much of his relevance anymore,the force of his persona, the centrality of his lyrical genus to his artistry, and his compassion for humanity make him the only choice. there are so many great songwriters these days that I love,(Chris Walla, for one) but none of them have the depth of influence that will be felt as strongly as Dylan.

R. When you're not strumming your guitar, which artists/band do  you listen to that is playing on your iPOD?
BS. Eric Bib

R. What are you working on now?
BS. I am doing some studio on guitars for a friend's project WorthyGhosts. I am also arranging a body of songs for my next album in 2012.

R. If you could write a song for any artists of your choice, who would it be and what would the song be about?
BS. I would have to write U2's next big single that they do another 360 tour on in 2012. It would be about the aspirations of the Americans known as the 99% who are just now starting an occupation of Wall Street.