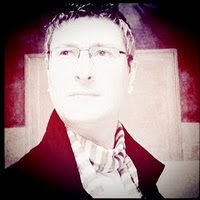 Christof Wiseman originally hails from Germany and from a very young age had a passion and curiosity for music and especially sound.

He always wanted to play music to people and from a tender age he'd supply music for small parties and family gatherings.He'd always be glued to the radio, recording things, shows, interviews, things off the TV and various stations and making compilations on tape with his brother.

This path eventually led him to become a D J and learn his craft in the hedonistic acid house / rave days in the UK, as he was always at the forefront of cutting edge electronic music. Not content with playing other peoples music, he wanted to learn the skills as a producer so he could have the pleasure of playing his own tracks out on the dance-floor, so many years in studios ensued learning his craft.

He has always had a huge passion for sound, be it recording sound effects, sound design and has had a knack of creating the right feel for the scene on screen. His love for film over the years has led him organically to where he is now; Founder and Company Director of Full Werks, freelancer, sound designer within films and the media industry worldwide.

Revolution caught up with Wiseman from his home in Manchester, UK to talk about the ins and outs of working as a sound designer and creating the musical landscape we are drawn too on the big screen.

R. You've had an interesting path in your musical career from DJ to sound designer. What are you working on now?
CW. Well we are still early in the year so far (at the time of writing) the film industry is notoriously slow to get going in the UK anyway, so in true spirit of things I'm still waiting for several projects to be green-lit and for the larger projects to come to fruition...when they do I shall look forward  to working on them all within my talented team and a great bunch of industry pros. In terms of music I'm working on the music placement and licensing side of my business right now, offering PRO/ royalty free music to be used cost effectively for film and media industry worldwide.

R. Both the music and film industry have evolved due to the digital era. In your own words tells us the positive and negatives of how this, has affected sound engineers like yourself?
CW. Good question Alex. Well the digital age has evolved over the last few years and has enabled us to work on state of the art DAW's and with really nice equipment and facilities and sound systems, which is just great. The advances in sound technology alone are stunning. I just love what people like Meyer sound and Avid/Euphonix are doing right, forward thinking with the industry profession in mind, I mean who knows where this will take us?

I'd say the downside is that some software companies are forever falling over themselves to out do one another and are perpetually trapped in the hamster wheel that is new version upgrades. This creates a headache for other manufactures as you have to constantly update everything which can be problematic when different users and clients are on different versions of software, for instance.

Things also date very quickly and today's must have hardware and outboard gear is out of date and useless in a few years as they have brought a new version out or the trends have changed and everyone's on a new system. On the upside though we are now in an age where the tools we use are very forward thinking, backwards compatible, very stable and the best versions yet.

This enables us to be quick, efficient and also very flexible and creative with the job in hand and have the very best cross platform post and music production platforms as well as hardware available to do the very best job we can do.

R. You bring to life,  many movies and videos with atmospheric sounds. Where do you get your inspiration from?
CW. Inspiration is a tough one as there has been so much in my life so far. Coming from a very musical background has helped me understand and fully appreciate sound in films a lot more. I have always been somewhat overtly obsessed with sound all my life. I was fascinated with recording sounds, effects and various weird and wonderful things as a child, and my love of this still stands today.

When I'm working on a film, you have to let the scene or film breathe and really convey and express what it is trying to speak with images and tones and really work hard at being creative, having your own input and being a catalyst and facilitator for what the filmmaker wants to convey or deliver in terms of feeling, undertones and screen presence.

R. What would you say has been the highlight of your musical career to date?
CW. Well in film terms I haven't reached the top in my field yet, but the ultimate would be known for being good at what I do and to work with guys in America more to get with the bigger projects that I'd like to be involved in. But to answer your question i can say this, in 2002 when I was D J'ing a lot and I was to play in Yerevan in Armenia in the summer. A bunch of international D Js went out there and I had the pleasure of playing an open festival in the town square with 35,000 people.

R. In all the movies you have seen, who would you say, has created the most outstanding sound score for motion picture?
CW. Wow that's a tough one. To be honest I'm a real film fan, always have been and even more so with original sound tracks. I used to collect them on vinyl and CD and still treasure them dearly. As such it's a tough call to single out just one as there are so many great influential composers over the years. so here is just a very small section of my all time favorites.

R. Complete this sentence...I have a dream that one day....
CW. ... 'If someone believes in you, and you believe in your dreams, that it can and will really happen.'