Skip to main content
Posted by Alexandra Juryte May 29, 2021

(Release) Irish international phenomenon Picture This announce fan album, Life In Colour, to arrive June 25 via Republic Records. To herald the release of the record, the quartet just shared a new single entitled “If Ever However Whenever Forever.”

Listen to “If Ever However Whenever Forever”— HERE

Picture This comment on the forthcoming album, “Our fans have been amazingly patient with us over the last two years and allowed us to get a body of work together that we feel is really worth the wait for them and we’re excited for them all to get their hands on it! We will be back with even more music a lot sooner than you would think too!”

Picture This preceded the album with “Things Are Different.” Co-produced by GRAMMY® Award-winning producers The Monsters & Strangerz [Justin Bieber, Halsey], German [Camilla Cabello, Liam Payne], and the band, the track has amassed 3.4 million Spotify streams to date. Inciting tastemaker applause, MTV UK recently declared them, “your new favorite pop band.” The guys also performed the song on The Late Show with James Corden. Plus, they sat down with Corden to chat about their new partnership with Joe Jonas and he recently announced Let’s Get It Records!

Additionally, Life In Colour boasts “LA House Party” and “Unconditional.” Thus far, tracks from the record have already gathered over 25 million total streams and counting prior to its arrival.

Representing music’s biggest global underdog story, Picture This has unassumingly captivated listeners in every corner of the world, amassing nearly 300 million total streams, selling out stadiums, and inspiring praise from Billboard, ThisSongIsSick, and many more. Emerging from Ireland with a cinematic pop-rock style of their own, the band’s 2017 self-tilted full-length debut, Picture This, kicked off a history-making run. In Ireland, it went triple-platinum, clinched #1 on Ireland’s Overall Chart for four weeks, and topped the Streaming Chart for seven weeks. In its wake, ticket sales eclipsed 500K as they headlined stadiums back home and various hallowed venues, including O2 Shepherd’s Bush London, SSE Arena Belfast, and 3Arena. 2019’s MDRN LV yielded hits such as “One Drink” and “Everything Or Nothing” and stood out as “the top-selling album from an Irish Artist in 2019.” They maintained this momentum by touring with Jonas Brothers and unveiling the 2020 fan favorite “Unconditional.” However, they show no signs of stopping or slowing down in 2021 either.

Next up, Picture This will headline a tour across the UK, kicking off on October 6 in Nottingham at Rescue Rooms and concluding October 15 in Manchester at Manchester Academy. Fans who pre-order Life In Colour will have access to ticket pre-sale: HERE. 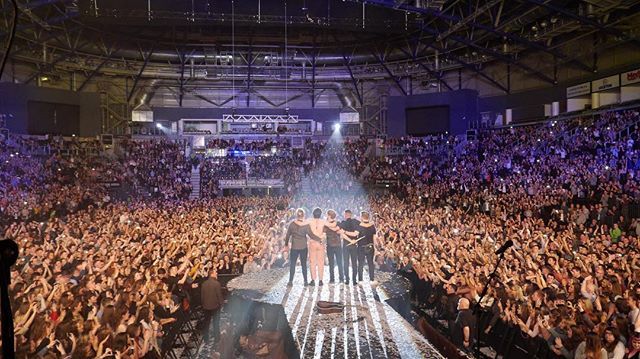