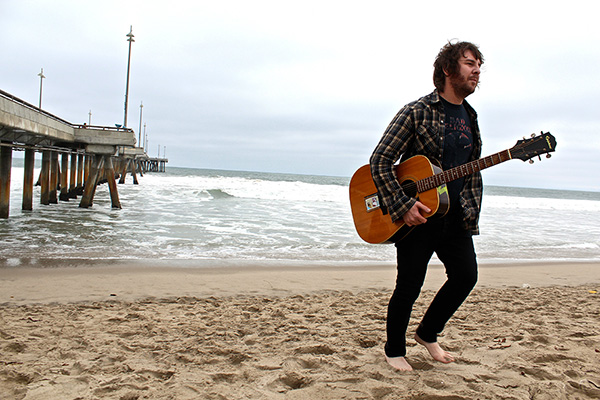 Xander Smith was born Alexander (Sasha) Wolton in Santa Monica, CA. He was named after his grandfather, Sasha Wolkenstein- an Austrian composer/violinist. At 10 years old, Alexander's father died, and he retreated into music - playing the guitar all the time and writing his own songs. By 12, he was already trying to form rock bands while other kids were busy playing sports or spin the bottle. After high school, he studied Philosophy at UCLA. Alexander was soon shortened to Xander, and he then took his Mother's maiden name, Smith, for his last name.

Over the next several years, Smith was involved in many projects. He first fronted the alternative, psychedelic goth band, Chalk Circle, with his college mates (including Jessy Greene- violinist of the Foo Fighters/Peter Himmelman). After that, Smith toured Europe as the guitarist for Danielle Brisebois (Epic). Next, Smith partnered up with Jennifer Finch (L7/The Shocker) to form OtherStarPeople, which signed with A&M records and recorded with legendary producer Roy Thomas Baker (Queen/The Cars). When A&M was absorbed by Interscope records, OSP became a casualty, but Smith's/Finch's songs made it into the film 'Office Space' and TV shows, 'The Real World', 'Buffy, The Vampire Slayer', CBS sports and the theme song for VH1 classic video showcase.

From 2000 to 2003, Smith was the musical director for L.A.'s monthly phenomenon Club Makeup, whose highly rated special on E! Entertainment featured Smith's original songs, relaunched Glam rock, and showcased now world-renowned drag queens/actors/bands Hedwig, Orgy, The Cult, Alexis and David Arquette, Andy Dick and Ice T. Since 2003, Xander Smith has been the frontman and band leader of Run Run Run. This indie shoegaze rock band has released 2 cds and 4 EPs in the U.S., Canada, Australia and Russia, has toured throughout the world, playing with bands such as the Strokes, X, The Walkmen, Psychedelic Furs, Zombies and Mumiy Troll, and headlined Red Square in Moscow in 2010. As a guitarist/multi-instrumentalist, Smith has also shared the stage with Linda Perry, Rickie Lee Jones, The Runaways, Adam Lambert, Dee Dee Ramone, The Violent Femmes and the Nymphs.

Now in 2013, with nothing but a Gibson J45 acoustic guitar and copies of his solo record, Hey, San Pedro, Smith is heading off to Europe this September. This odyssey began in 2012 when Smith raised more than five figures from Kickstarter, and fan contributions, which helped to record his debut solo album and fund the subsequent tour Europe and the United States. These tour dates stretched from Manchester, England all the way to Siberia and laid the groundwork for this upcoming fall tour.  We caught up with Smith from his home in Santa Monica to chat about all things music...

R. In your own words, how would you describe your music?
XS. Like the pitter patter sound and smell of a desert of a rain as it's just starting up. That and the soundtrack to those particularly quiet but intense moments like when your lover walks out the door for real for the last time, or when you're at your most down, a kind soul gives you a hug.

R. Where do you usually gather songwriting inspiration? What is your usual songwriting process?
XS. Heart break and more heart break. I just watch myself and other humans fumble through life very messily, but instead of hearing an iron maiden type riff, these days I hear the beginning to a great George Harrison or Bread song.

R. You've had the pleasure to perform and play along side many great artists. What would you say has been the highlight so far?
XS. I joined Andrei Makarevich in Kazan to sing "Give Peace A Chance" to 180,000 Russians. I can't even describe what it was like to see a sea of faces singing along to such a powerful song. Makarevich is mostly unknown in the West, but he is like Dylan or Springsteen in Russia, so it was a real honor to perform with him.

R. "Oh Caitlin" is the first single/video to be released from your solo album Hey, San Pedro. Who is Caitlin? Was she the culprit to such a beautiful sunny song?
XS. Caitlin is a real person. She is just lovely, and use to hear me work up bits and pieces of these songs. One day, she strongly encouraged me to share this music with the world. So, when I assembled the songs that make up Hey San Pedro, I realized I need a last minute sentiment to honor her and the positive.

R. Someone once said write what you would want to perform over and over. With that in mind, what song do you love to perform the most?
XS. I love to sing and play the title track, Hey San Pedro. I just think it's so personal and I love the way it unfolds on the guitar.

R. Do you have your own favorite type of music and is it any different from what you play now?
XS. I love Judas Priest played very loud while I attempt to jog to the park near my apartment. I also really like the crooners of the mid 20th century and Patsy Cline when I go to sleep.

R. As an artists, how would you define success?
XS. I think if music is still flowing through you, and you get the chance to see even one other person's eyes get big when you play it, you are succeeding.

R. Lets imagine for just a moment it's the mid 70s, your at a party and the usual suspects are hanging around The Beatles, Neil Finn and none other than Astrid Gilberto.They decide to have a jam and call you from the crowd to come up and sing a song. Which one do you choose to close of the evening?
XS.  A very slow version of "What'll I do" by Irving Berlin. It's just the perfect song for blokes like us. Hopeless and romantic and forever distracted by sentimentally...