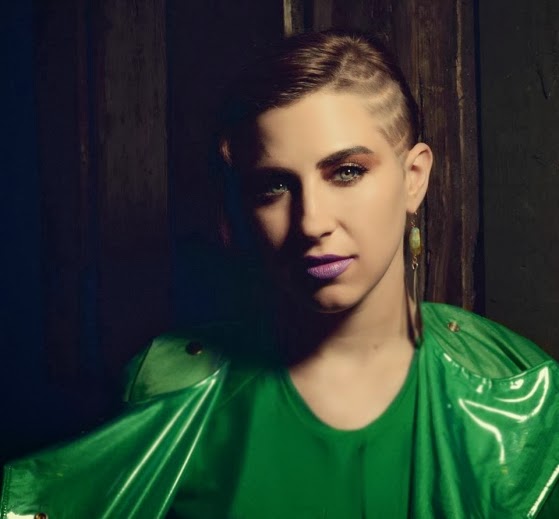 Award-winning gypsy jazz vocalist Mary Alouette has just released her sophomore effort, The Lark. The follow-up to her debut EP Midas, the five-track EP flaunts Alouette's unique marriage of traditional gypsy jazz and electronic music production. The Lark "is not your typical jazz album with its funky and fresh sound that coincide flawlessly with Alouette vocals. As an opera student at McGill University in Montreal, Mary Alouette developed an interest that didn't correspond to her studies: electronic music. It took moving to Brooklyn and embarking on a career as a gypsy jazz singer to finally bring electronica into the mix.

Alouette collaborated with film director Ellie Lotan (Wes Anderson's assistant for Moonrise Kingdom) to create the music video for the first single off of her new EP, "Angel. The song begins with a dark electronic sound heavily influenced by witch house music. "Angel" then transforms into an ethereal vocal ascent to reveal the light within the darkness. "Just You," the second single off the EP, features a dynamic interplay of double bass and gypsy jazz guitar over hypnotic electronic beats and textures.  It draws upon the music of Jose Gonzales' band Junip and the thematic content of David Lynch's TV series, Twin Peaks.  The penultimate track, "Deux Yeux," is sung in French and features progressive trap beats and a gypsy rhumba rhythm.  Notes of Portishead's music and James Bond's adventurous approach to life are delightfully represented.  The final track, "Charlie," digs in with a jazzy hip hop beat and soulful vocals.  The lyrics are directed towards Alouette's love interest, whom she affectionately calls "Bambino," meaning “baby boy”.


Alouette’s music continuously evolves within her songs and arrangements. Electronic drums and sample-triggered percussion complement Alouette’s voice that displays a beautiful tone and control. As a multi-instrumentalist and a dedicated songwriter, Mary has laid the groundwork for a fresh, distinctive and unforgettable sound.