If you are a John Mayall fan this album is heaven;  if you are a blues fan, put this album on and you will arrive in the same divine place. Produced at the House of Blues Studio in Encino, CA, by Mayall and Eric Corne of Forty Below Records, the album is a lively mixture of new songs about old times and new tunings of old covers. The final result is earphone candy for the Mayall aficionado and a top of the playlist album for blues fans in general.

Powering Find a Way to Care is Mayall’s band, which describes as “I have chosen musicians for what they bring to the table….and this is the best band I have ever had”. The “best band I ever had” consists of Rocky Athas on lead and rhythm guitar, Greg Rzab on bass, and Jay Davenport on drums.  Collectively, these three have been with Mayall for seven years, but for this album, something special percolated among them. This was partially a result of Mayall’s encouraging the band to express their own creativity in writing and solos, and partially a result of Eric Corne’s joyfully deft guidance on the production. 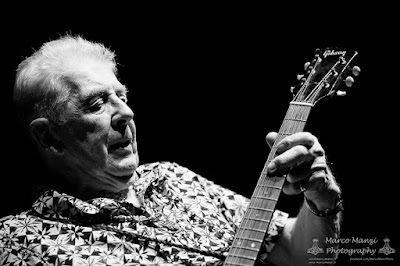 I say “joyfully deft” because Corne, who has produced before with Mayall, kept a light hand on the controls, but a sly sense of humor and a good feel for opportunism. While recording a cover of Percy Mayfield’s “The River of Invitation”, bassist Greg Rzab was not quite satisfied with the sound but didn’t know what to do about it.  The studio owner saw him walking around perplexed, knocked on the window and held up a Rickenbacker fretless bass. Rzab took it, plugged it in and tuned it up; Corne saw what was happening, turned on the recorder and the resulting baseline track glued the take together.  In another song, Corne left the mic and recorder on while Rocky Athas was playing around with a guitar rift, unaware he was being recorded and thinking he was just experimenting.  When Mayall heard him playing he shouted “that’s the one, that’s the one”.  Fortunately, Corne knew that good things sometimes come when the band doesn’t know the red light is on and had recorded the entire riff.

The album also stresses Mayall’s keyboard skills on Wurlitzer, Hammond, B3 and clavinet although it does use some of his guitar and harmonica chops.  It opens with the familiar, a cover of Don Robey’s “Mother In Law Blues”  with Mayall’s gravel voice pitched a bit higher than the original and the harmonica kicking it hard in the call and response bars and the Hammond  screaming through the instrumental bridges. Moving on to Percy Mayfield’s “The River’s Invitation”  Athas’ fretless bassline interweaves with Davenport’s drums, scaffolding Mayall’s keyboard melody and lyrics, colorfully accented by a horn section to create that stomach-tightening sound Mayall is famous for.

After warming us up with covers, Mayall comes out with a new original, “Ain't No Guarantees” – a classic Mayall power blues, driven by very sophisticated drumming and carried along nicely by his B3 and clavinet notes.  Mayall’s vocals pierce the music veil when he sings, but the power of this piece is the keyboard-driven melody line. He then takes us back to familiar territory with Sam Hopkins’  “I feel So Bad” in an easy going tempo carried by the Wurlitzer and accented by horns. 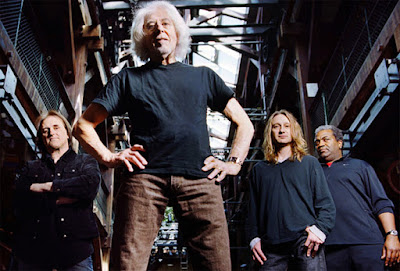 He picks up the pace with the album’s  title song, “Find a Way to Care”, a horn-colored paean to easier, slower times and admission that aging “has its price”.  Mayall is “looking back to where I been”, but he makes it clear that  as “times are changing now, we gotta do the best we can…and I’m gonna follow my dream”,  the perfect sentiment for a bluesman who has been around long enough to see his art form leak into virtually every music genre and who is still producing new songs.

Mayall’s art form and the cohesion of the band is on full display in the covers of McKinley Morganfield’s “Long Distance Call and Lee Baker Jr.’s “I Want All My Money Back”,  ranging from relaxed and mostly instrumental, to hard driving, drum-led down and dirty blues.

But all of this is groundwork for what I think should be the album’s hit single on the blues charts, the Mayall/Rzab collaboration “Ropes and Chains”. The song is a symphony for the clavinet and the bass played like a lead guitar.  The song soars above dirty blues and leaves easy going behind to cut deep into emotional territory.  Rzab’s baseline slithers along the ground while Mayall’s lyrics and harmonica dive bomb us from the high notes with pain and determination – Ropes and chains won’t keep you from me – and he means it.   Color this one Chicago funk and put it on repeat.

He keeps the original sons string going with “Long Summer Days”, a look back on his youth on a farm in England, and a bonus track “Crazy Lady” a breezy piano-driven  memoir of a crazy girlfriend from 1972 and a wonderment at what he was thinking in his youth…a nice wrap up for the album.  There is a second bonus track, “The War We Wage”, co-written by fellow Brit blues guitarist Matt Scofield (now on tour in the US) and his frequent collaborator Dorothy Whittick , driven by Mayall’s lyrics and Athas’ great guitar solos.

John Mayall has been singing the blues for 70 years and playing professionally for 50.  Most Americans discovered him in the 60’s with his band, The Bluesbreakers, absorbing steaming, gut-wrenching melodies while they drifted into marijuana laced reveries. The band changed names for 15 years and then returned as the Bluesbreakers from 1982 to 2009, with a long list of other stars including Eric Clapton.  Now 82 and known as “The Godfather of British Blues”, he is a member of British music aristocracy and was awarded Most Excellent Order of the British Empire).

Mayall is still touring (he kicks off an international tour Sept. 5 in Norway), exploring and experimenting and shows no signs of slowing down, although his singing voice is not quite what it used to be.  If you are new to Mayall and this album is your first exposure to his brand of the blues, you would not know the length of his career from the way he improvises and belts and shouts. If you are a Mayall fan, you know all that and you will love it even more...

John Mayall Find A Way To Care is available HERE 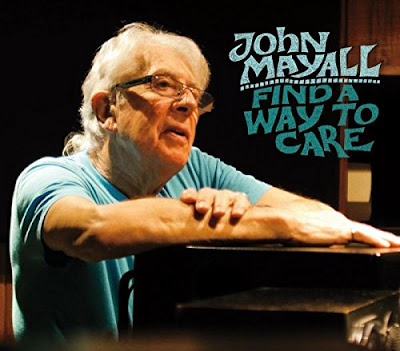 Fairness Radio said…
Love teh photo with the harmonica.
15.9.15