Review: Rashmi Singh admits that she is still finding her voice – although the voice that sings on her second album, Puzzle, is so glorious that most people would be content with it. But not this Texas-raised, New York-based-singer-songwriter/actress/director who easily moves from country western to blues to pop to indie in a single album.

“There are times when I feel like I am still finding myself…my unique voice is taking its time to come out,” Rashmi says when explaining how Puzzle fits together country, folk, blues, rock, and ballads in a coherent whole that defines gentrification while it demands attention.

The pieces of the musical puzzle that is Rashmi are varied and unique: the soundtracks of the Indian movies of her childhood, the classical music she listened to as a youth, the omnipresent top 40 and country western music on the radio in her formative years in Dallas, the weekend salons of poetry, music, food and conversation her art-loving engineer father and doctor mother gathered at their Dallas home. As Rashmi arranges and re-arranges these pieces, seeing which ones fit with others, trying this variation then that, the gossamer image of a rising talent is taking shape before our eyes and ears. 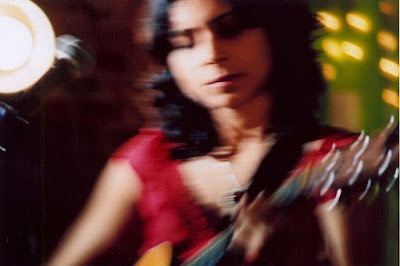 Fewer than half the seven songs on Puzzle are country, (on the iTunes version, counting two versions of the title track) opening with “Old Times Sake” a solid big-guitar country song about an old relationship, but with a rock guitar twang and city-sophisticated drumming. It started as an acoustic arrangement that grew, calling out for more instrumental depth and for one of lead guitarist Wilson Montuori’s down home electric solos after the bridge.  “Old Time’s Sake” shows that Rashmi does country and she does it well.

But she does much more. As the twang dies down from “Old Times Sake”, Rashmi sweeps you away with the title song, a gossamer excursion into her journey of arranging and rearranging the puzzle pieces of who she is and what she creates. Not good enough now she sings, always looking for better. Framed in dreamy guitar strings, soft drum hits and the full and gentle force of Rashmi’s spacious voice, “Puzzle” is only one of the variations of how Rashmi fits together the pieces of this album, but to me it is an exquisite crystalline image that lingers long after the final note.

Puzzle quickens the pace and shifts the mood back to country, with “Fly with Me”, a joyful, addictive  rhythm guitar and kick-drum-driven call to join her heart’s sky-high quest. But it is also a caution that she demands courage – don’t get aboard if you’re just going to fall apart, I need to know we are going the same way/once we are off the ground there’s not much more to say. Proving how far off the ground she is flying is “Here Again”, a dreamland of a love song with a hint of the Indian voice from her childhood’s films but a structure that, while country in feel,  defies genres in a slow-dance twirl.  Carried by a jazz-like drum/bass line and minor key guitar that knows exactly where your emotional solar plexus are, “Here Again” is a waltz at a nostalgic heartbreak ball. How do I forget the way  you make me feel, she asks in the opening verse. The same could be asked of those who hear the song, and the answer is “you don’t forget”.

“Choosing Blues” takes us into a different part of Rashmi’s heart and mind – the search for home, specifically LA or New York, done in a down dirty blues song that speaks of her arrow-sharp songwriting and an embedded feel for blues. While “Puzzle” is the crown jewel of the album, “Choosing Blues” will go to the top of playlists the most often:  it gets you in the gut.

The album leaves you with “Shadows”,  and ethereal, but  definitely not delicate, tale of a shadow-drawn world of loss that unfurls like a black and white canvas with her voice, accented with cinematic overdubs set to a compound drumbeat and rhythm strums. Like “Puzzle”, “Shadows” lingers long after the last night dies.

Puzzle is Rashmi’s second album and it pushes even farther into wider worlds than her debut, Rainstorm, ventured.  In doing so, it leaves us with a gift of introspective and emotion laden songs that stand up solid on their own as they mark the next signpost in what will be a very productive future.  It is so much fun listening to Puzzle assemble and reassemble Rashmi’s musical muse and it is going to be even more fun watching Rashmi create and present even more puzzles, musical and otherwise. 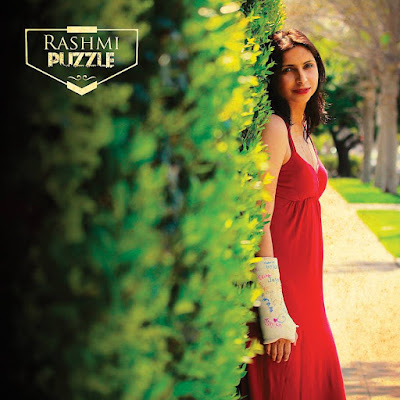