Release: New York City-based singer-songwriter, Jenny Bruce, is proud to announce the release of her new track, “Backlit Bottles,” the first single from her upcoming  debut EP, Firefly in a Jar. Written in a bar while waiting for a friend, the song marks the time Bruce was finally able to overcome a very dark period of her life, following the loss of a close friend and two family members. Now, over a decade later and a mother of two, Jenny Bruce has emerged from a long musical hiatus and is ready to release Firefly in a Jar to the world.

Born and raised in New York City, Jenny Bruce was immersed in music since very early childhood. During her illustrious music career spanning 15 years, Bruce released three studio albums in 1997, 1999 and 2001. “Home” from her 2001 release, Soul On Fire, was included as the only track from an “unsigned” artist on a popular Martha Stewart compilation CD, featuring Alison Krauss, Barenaked Ladies, Lucinda Williams and other well-known artists. Over the years, Bruce has shared the stage with Sophie B. Hawkins, The Nields, Toby Lightman, Avril Lavigne, Richard Julian, Vanessa Carlton, Gavin DeGraw, Livingston Taylor, Lucy Woodward and Joe Jackson. Bruce won several songwriting awards and honors, including Billboard Song Contest, Great American Songwriting Contest, the John Lennon Songwriting Contest and many others.  Bruce’s songs have been heard on multiple national TV shows, including All My Children on ABC, Ghost Whisperer on CBS, The Today Show on NBC, Dawson’s Creek on WB and King Of The Hill on FOX.

Music Connection calls Bruce’s work “intelligent” and “full of pathos and gentle ironies.” The MA Springfield Union writes, “A lot of women picked up guitars to join the Lilith trend, but Bruce is the real thing.” Be sure to check out Jenny Bruce and her new single, “Backlit Bottles,” from her long-awaited new release, Firefly in a Jar. 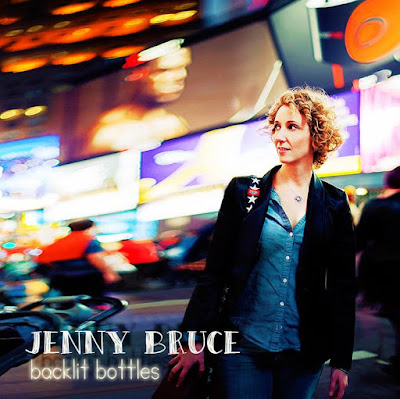