At nine songs, the album seems diminutive on the surface, but Victor and Fibush have slipped a little Irish humor in the arrangement, as most of the album's songs are combinations of two or even three tunes, giving the album a  richness that overflows with emotion, imagery, and sparkling cleverness.  The album opens with "Patty Canny' Toast", a Charlie Lennon composition from County Leitrim, that swirls hypnotically with mandolin and 6-string threads interweaving almost invisibly. They drop the invisibility cloak for "Bold Doherty/Bill Hart's Jig", ostentatiously traversing two genres in a mashup that is altogether more than the sum of its two parts. Ostentatiousness continues with "The Creel/The Sweetheart Reel", a familiar Irish story of illicit love, but with a 33-foot ladder thrown in for fun, as sung by Marla in this version of Ballad #281 from Francis James Child's 19th-century collection. 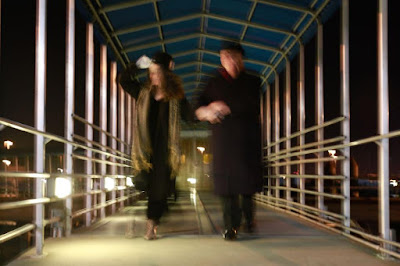 Fibush continues her musical tale-telling with "Trip to Skye" by J. Whelan and "The Good Doctor", her own creation that ingeniously changes keys throughout. "Blind Mary" combines with "Cold Missouri Waters" in a tale we have heard in many variations, this one with the mandolin, 6-string and tenor guitar with Victor laying downs the lyrics in a ghostly voice. "Blind Mary" is my personal favorite, with a refrain – some would call it a hook – that sticks with you.

The pace again picks up with "The Cloone/ March Reel/The Abby Reel" which brings in the resonance of the 12-string, and the baroque  "Mister O'Connor " combined with the singular "The Broken Pledge", played delicately but fiercely on the mandolin, mandola, and cittern.

The pair wrap up the album with two of their own creations, " Song of the Wave" drawn from Khalil Gibran's poetry sung by Fibush with harmony by Victor, and the title song, "A Sweetish Tune" featuring Aryeh Frankfurter on the nyckelharpa, a traditional Swedish musical instrument played with a bow with keys attached to tangents that serve as frets to change the pitch of the string.

"A Sweetish Tune" will delight the legions of traditional Irish music and excite those who like to see boundaries pushed. Noctambule's world class musical artistry on modern and traditional instruments combined with their willingness to experiment with an ear for what sounds right, make this a must-have album from a must-follow musical couple.