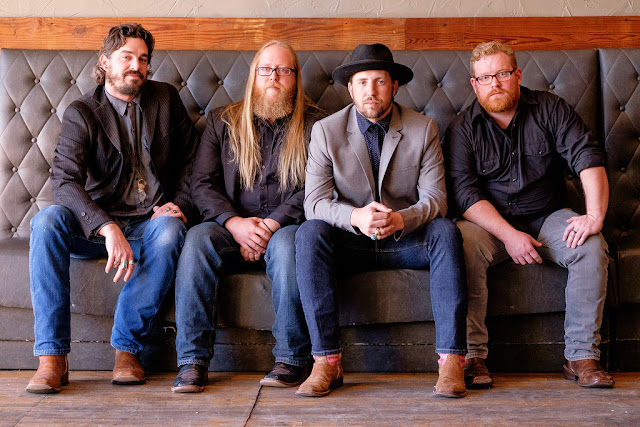 (Release) Americana folk-rock band No Dry County (better known as NDC) and the new track, "Fifteen Piece Band," ahead of their new album, Panhandle Music, due out this Spring.
Panhandle Music is an album that tells the story of the people within this landscape, from their deepest despairs to their highest hopes.  Everyone has their mountains to climb, even in a land as flat as ours.  Within this vast landscape are the interwoven tales of an ex-rodeo cowboy turned truck salesman whose economic success in the Big D has taken him far from his family and the ranch life he intended, a truck driver who fantasizes about running guns for Elvis, a BNSF railway-master who daydreams of retirement as a ship captain out to sea, a war veteran struggling to reconnect with family and cope with civilian life in the midst of harrowing PTSD trips, drug addicts who can’t escape their addictions, their relationship, or their dusty one light town, and an aging and unsuccessful indie-rocker who returns home after the recession of 2009 and finds friendships and a renewed sense of power in the old dance-halls of his youth. Their illusions and expectations set the stage and tell their bittersweet stories of a place they can’t save and never truly escape.

NDC, comprised of Trent Langford (Singer/Songwriter/Guitar/Keys), Matt Newsom (Drums/Vocals), Dub Wood (Bass/Vocals) and Bristen Phillips (Guitars/Keys), began in 2009, as an 80’s cover band. Developing a sound of their own, NDC released their debut EP Ella Rose in 2011 followed by their sophomore EP To Whom It May Concern in 2012 and debut full-length, The Night Before, in 2015. Fusing each member’s influences, including Ryan Adams, Kings of Leon, Hayes Carll, rock, metal, blues and country, "the resulting sound infuses Americana with classic rock, creating heartfelt music filled with lyrics about real life, real places, and real people...the kind of music that everyone can relate to." No Dry County has been honing their sound, performing over 100 dates per year.