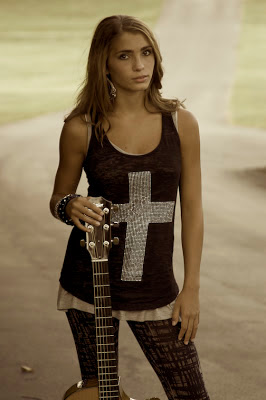 Newcomer-singer, musician Alana was born and raised in Pittsburgh, PA. At 14yrs of age and still at school, her musical career took a sudden turn when she got discovered by Grammy Award Winning Producer/Engineer Rae DiLeo.

After months of working in the studio and collaborating with songwriters and musicians from around the country, she released her first EP in July 2011. Her debut video "With You" carries a strong message about texting and driving to her generation. Her voice is tender, with rooted undertones together showcasing her musical abilities, Alana is mature beyond her years and is a star on the rise.

Revolution caught up with Alana from her hometown in Pittsburgh to discuss her musical journey and the making of her new video.

R. You were discovered by Grammy Award Winning Producer/Engineer Rae DiLeo, tell us how that came about?
A. Well, it all happened from being in the right place at the right time. I was at Treelady Studios (Pittsburgh) recording a couple of Taylor Swift songs, and my dad happened to come upon Rae's office which had been under construction at the time. Of course, my dad began to ask questions about what the empty space was going to be, and the guys from the studio informed my dad about Rae and about who he is and his background. Long story short my dad had my recordings sent to Rae, after a while I ended up meeting Rae and performing a few songs for him...and this is where I am now!

R. Your new to the music industry,what was it like for you to work in a recording studio?
A. Working in a recording studio is an experience that not a lot of people get to encounter. I think of it as a privilege. It was a lot of fun, but also a lot of long, hard work, but it's all worth it in the long run. The most exciting part was hearing the final version of what was recorded.

R. What are your musical influences?
A. My musical influences would be Taylor Swift, Miley Cyrus, Colbie Callait, and some other bands/singers along those lines. Their lyrics tell a story and I can relate to the stories because I'm experiencing those similar situations as a teenager, I look up to them and it influences me on my future career.

R. You've just released the single "With You" along with a video. The song depicts a strong message about texting and driving, In your own words tell us about your experience with this?
A. My experience with everything I did for "With You"... it was a wonderful experience. Working with all the people who are supporting me was very fun, especially video directors Colin, Christian and Andrew (the brains behind the video). I learned a lot from them along with the message of the video.


R. You're only 14yrs old and mature beyond your years, whats your view on whats playing out there musically?
A. I really like the music that's played out their today. The only thing I don't LOVE would be pure rap. I would like to hear more of Country pop music on the radio once in a while because it always tells stories and sort of gives you advice.

R. If you had to choose any artist from past or present who would you choose to do a duet and what would the song be about?
A. If I had to choose somebody to do a duet with, it would probably be Taylor Swift. I just really love her and her music and she really inspires me. I would want the song to be about how friends and/or people act towards each other and how they are fake or mean. Like a relationship between friends and what goes on.
Email Post