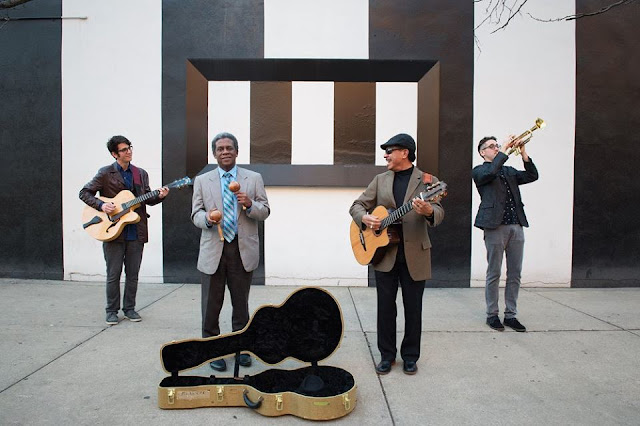 (New York, NY) Charlie Baran has lived a life of music. Before moving the the United States he was a founding member of the legendary Honduran musical group Banda Blanca, who’s song “Sopa de Caracol” became a Billboard 'Top Latin Songs' hit in 1992. Now a maintenance man at a Catholic grade school by day, Charlie has kept his musical flame glowing largely through acoustic solo performances around Chicago for the past ten years. Baran is an heir to a rich tradition of Honduran music, as well as a guitar slinging showman and a gifted songwriter whose skill transcends all genres. But throughout most of his career he has existed in the shadows – until the formation of Radio Free Honduras.

Radio Free Honduras is a diverse collective of Chicago musicians all united under one goal – supporting the artistry of Charlie Baran and bringing his tremendous talent into the spotlight. Founded by Dan Abu-Absi, longtime guitarist for JT and the Clouds and Birds of Chicago, Radio Free Honduras plays mostly Baran originals, but their live shows often feature a wide variety of reimagined cover songs. This band provides Charlie with the wide musical pallet his talent (and songs) deserve. Abu-Absi has gathered a large, revolving group of some of Chicago’s most talented musicians; lively percussion, eclectic instrumentation and rich harmonies all provide the backdrop, allowing Charlie to do what he does best – stunning guitar work, tapping into what seems a limitless supply of energy and enthusiasm for music.