Skip to main content
Posted by Alexandra Juryte May 08, 2011 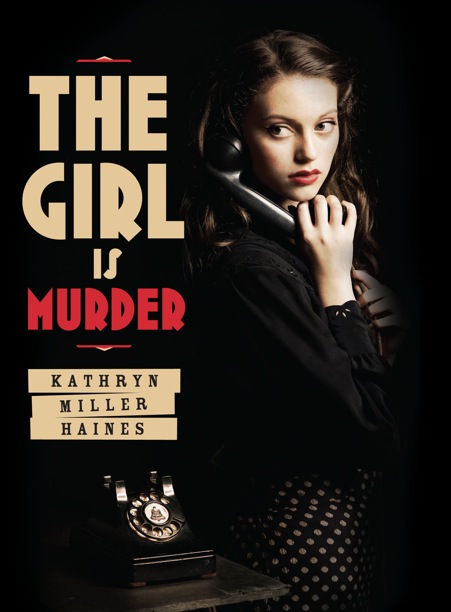 Kathryn Miller Haines is an actor, mystery writer, and award-winning playwright. She grew up in San Antonio, Texas, and received her BA in English and Theater from Trinity University in San Antonio and her MFA in English from the University of Pittsburgh, She's a member of the Mary Roberts Rinehart Chapter of Sisters in Crime and has been a board member of the New York chapter of Mystery Writers of America. In addition to writing the Rosie Winter mystery series for HarperCollins, she's also writing a young mystery series for Roaring Books Press, a division of MacMillion, the first of which, "The Girl is Murder", will be out in July 2011. She also has a story included in Pittsburgh Noir, a collection of mystery stories in Pittsburgh neighborhoods that will be released by Akashic Books this month.

This dashing brunette, has a writing ability that makes Angela  Lansbury's "Murder she wrote", almost look like Disney. Revolution caught up with Kathryn to discuss her up and coming new book and get behind the scenes on writing a mystery book.

R.What led you to become a mystery writer?
KMH. First and foremost, I have always loved mysteries. I love the fact that, unlike everyday life, there's a solution and things (usually) get tied in a neat little package. I turned to writing as a way of improving my (very weak) plotting skills. The level of intricacy involved in the genre is extraordinary.

R.You have a new book soon to be released titled"The Girl is Murder"what can your readers expect this round?
KMH. While this new series is, like my earlier series, set in World War II in New York, this time I'm dealing with a fifteen year old narrator who is as frustrating and infuriating, as well as charming and heartbreaking, as most fifteen year olds are. It's fascinating viewing a world at war through her eyes, rather than that of someone who's more mature and better equipped to deal with what they see happening around them.

R. Your stories are set in World War II with colorful characters and beautifully described scenes from the 40s era. How much of your own personality comes through the main characters?
KMH. A fair amount, I guess. I don't think I'm my characters by any stretch, but certainly there are seeds of how I might react in a given situation sprinkled in each book. I'm neither as good nor as awful as anyone I've created though.

R.We are seeing the end of a dying era where book stores like Borders and Barnes n Noble are slowly closing down. What kind of emphasis does that have on a writer like yourself who relies heavily on its readers to purchase books and appreciate the over-all quality of print and paper?
KMH. I think good writing will always trump everything. If you write good books, people will talk about them, people will seek you out, regardless of whether or not there are brick and mortar stores and paper copies or only e-readers and the internet. So, for now, I'm going to just keep trying to write better and better books. Digital delivery didn't kill music and it most certainly won't kill writers.

R. Which writer of this century has been an inspiration to you?
KMH. Is it a copout to say all of them? I kind of become obsessed with whatever I'm reading at the time. I suppose I've been most influenced recently by other YA authors as I try to figure out what works in the genre, etc. To that end, Suzanne Collins, who wrote the Hunger Games trilogy, is definitely at the top of my list. Anybody who can make someone like me get excited about dystopic fiction is aces in my book.

R. What favorite artists would you say, best describes your books?
KMH. I'm going to go with Max Raabe and the Palast Orchestre, who I just had the great pleasure to see in person. Although the songs he tends to perform predate the era of my books ('20s and '30s), he has a way of making the "old-fashioned" feel contemporary, and the contemporary (see his cover of "Oops I did it again" and Tainted Love") feel old-fashioned. Plus he has a remarkable wit and intelligence.

R. Let us imagine for a moment that Alfred Hitchcock was alive and working on his next mystery thriller, you have been appointed feature writer and main actress, what screenplay and character would you play?
KMH. If we were redoing an existing Hitchcock film, I'd love to recast Rope with women in the men's roles. I'd probably want to take the Jimmy Stewart role. If we were starting from scratch, there's a wonderful little thriller by Morag Joss called Half-Broken Things that I would love to see turned into a film. I'm not sure I'd be right for any of the characters, so perhaps I could just have a Hitchcockian walk-on during a crowd scene…