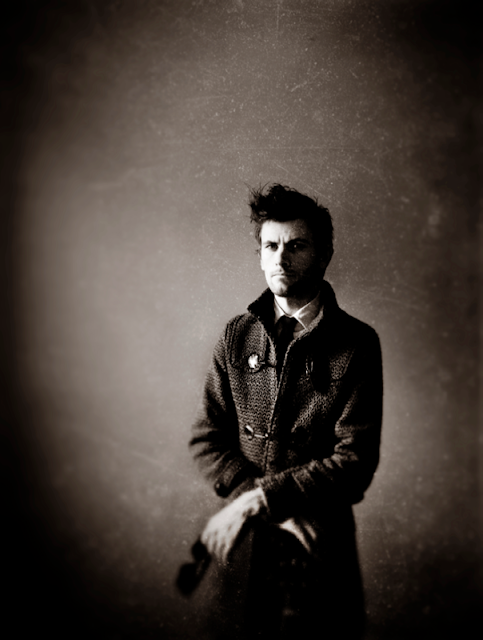 Levi Weaver, is one of those rare artist's that has emerged and struck lightening with his audience. His beautifully haunting voice and poetic lyrics set him apart from many. Yet, he is equally impressive to that of Leonard Cohen and the Late Jeff Buckley.

Born in Colorado, his father was a professional rodeo cowboy and ordained minster. He traveled a lot from rodeo to rodeo until he finally settled in Texas.

At 24 he moved to Birmingham, England in which a turning point occurred and he was picked up by Imogen Heap and toured extensively around the country.

Today he lives in Nashville, his gentle humbleness to not be overly driven by stardom and remain honest to himself, reflect through his songwriting and his live performances.

Revolution got up close with Levi to discuss his insights on music, his personal endeavors and the comfort of driving around the country with his Honda CR-V.

R. You have just released your 3rd album titled "The Letters of Dr.Kurt Gödel". Tell us about this new album and who is Dr. Kurt Godel?
LW. Kurt Gödel was a mid-1990's mathematician/logician. He was a contemporary of Einstein; a brilliant mind. But he was also an interestingly quirky individual (as a lot of the genius mathematicians; they were "rock stars" before rocks stars existed). He wasn't Paul-Erdos level weird, but definitely had enough abnormality to make him a fascinating character. The album is a concept album (tells a story from start-to-finish), and what I hoped to accomplish was to take Gödel's "Incompleteness Theorem" and loosely translate it from pure mathematics into a more human problem: the search for... Meaning/Answers/Contentment that everybody fights with at some point in their life. So it doesn't directly deal with his life, but it's more loosely based around an interpretation of one of his theorems.

R. You spent some time in the UK and eventually toured with Imogen Heap, how did that connection come about?
LW. Ha... I wish I had a great story about how hard I worked, all the e-mails I sent and phone calls I made, but honestly - I won a My Space competition to open for her in Birmingham. About a week later, I got a message asking if I could open/play guitar for her on her upcoming U.S. tour. I got immensely lucky.

R. Your audience is no doubt captivated by your poetic storytelling lyrics; where do you get your inspiration?
LW. I've always been really inspired by anyone who could do a combination of two things: 1). Make me feel what they were feeling when they wrote the song, and 2). Make me 'care' about feeling what they were feeling. I mean...If I write a song that is just "oh girl... I like your jeans, girl..." Yeah. By a total lack of subtlety, I have accomplished #1, but I haven't made you think. It's just a slap in the face. I haven't accomplished # 2. Alternately, if someone is writing "by deciphering a MIU-based isomorphism, we have revealed more of the inherent properties of MUMON". I really wish I understood what they were talking about (it sounds fascinating!), but they have failed to connect with anyone doesn't grasp advanced mathematics. So aiming at that two-part combination, I think, is always in the back of my mind. I write about whatever I want, but if it doesn't fit those goals, it doesn't see the light of day.

R. You are based in Nashville and content on driving your Honda CR-V. You've settled for a life less opulent than to those who are seeking the glittering lights. Is this something to do with your rooted upbringing and growing up in rodeos?
LW. Maybe. Honestly, I think my modesty has been foisted upon me, in some sense. When I was 20, I would have taken that opulent lifestyle, no questions asked. But it didn't come, and I feel like what started as a self-defense mechanism ("I was good enough! I just didn't get lucky enough! Whine Whine!") turned into some real honesty, which is "I really do have so much more freedom to make honest art this way. No profit-focused label head can tell me what to put on my records. I definitely still have people that I trust to make sure that I'm not getting too self-serving to give me quality-control checks, so to speak, but thank GOD I never have to hear the words, we're going to shelve this thing you spent your last year on; we just don't hear a single."

R. Away from your own music, when your at home who do you listen to?
LW. I most certainly never listen to my own music. After hearing the songs a couple hundred times during the recording/mixing process, I'm done, done, done with those recordings, foreverrrrr. I've had a few CDs in rotation lately: Bear Cub (from Nashville) are an up-and-coming alt-folk outfit; pretty dark, but exceptional stuff. Erika Werry (from Toronto) is a supremely unique singer/songwriter who I've done a few shows with (check out "Time on Our Hands"). And a year later, I still can't stop listening to The National's new record.

R. If you could be any musical instrument, what would you be, and which iconic artist dead or alive, would you chose to play you?
LW. Ha. Theremin, Clara Rockmore. (I don't want any artists putting their fingers or lips all over me).