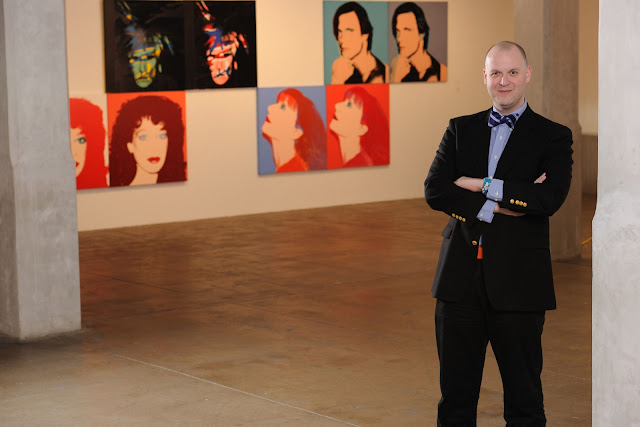 Eric C. Shiner is a man with an extraordinary vision, at 6'5" his tall presence makes a mark when entering a room, he greets me at the Warhol head quarters in fine form. Impeccably dressed with his well fitted suit and colorful dandy bow he ushers me into his private office where we sit to discuss his artistic journey and get insight on one of America's most eccentric artists of the 20th century. Eric Shiner is the new Director at The Andy Warhol Museum in Pittsburgh. His scholarly focus is on the concept of bodily transformation in postwar Japanese photography, painting and performance art. Shiner was as assistant curator  of the Yokohama Triennial 2001, Japan's first ever large-scale exhibition of international contemporary art, and the curator of Making a Home; Japanese Contemporary Artists in New York at the Japan Society in 2007. He is an active writer and translator, a contributing editor for Art Asia Pacific magazine, and was most recently adjunct professor of art history at Cooper Union, Pace University and Stony Brook University. Shiner's hometown is New Castle, PA.  He received a Bachelor of Philosophy in The History of Art & Architecture and Japanese Language & Literature from Pitt's Honors College in 1994, an M.A. in The history of Art from Osaka University in 2001, and another M.A. in The History of Art from Yale in 2003.

R. You've come a long way from your days growing up in rural New Castle, PA. What led your journey to the arts?
ES. I grew up in a family that collected art, antiques and collectibles, so I was constantly being hauled off to auctions, flea markets, yard sales and garage sales from an early age. I think that experience helped me to hone my skills at finding the needle in the haystack...that really great object in an otherwise mundane sea of junk. That started my interest in decorative arts, which eventually led me to take art history classes in college...and I liked what I heard, so I stayed.

R. For the most part of you're early career, you have been associated with the Asian Art world, What is the fascination with that part of the artistic world?
ES. I started studying Japanese Language in high school when I participated in Pennsylvania Governor's School for International Studies, a program which unfortunately is now defunct.  That program gave me the chance to find out about Asian Art, and I felt very connected to it for some reason. Later in college, I carried on with my Japanese studies, and then went to visit Japan when I participated in the Semester at Sea program during my sophomore year. I then decided to study abroad in Japan, studying at Konan University in Kobe for the entire year, and that's when my interest in Japanese art become fully cemented.

R. We have seen many changes in technology, the music industry alone was hugely effected by the digital era. How has the digital era changed the art world, and what will become of art in the future?
ES. Artist will always use the latest technology to either make their work or to influence it in some way. The invention of the locomotive redefined vision and led to Impressionism, just as the invention of the motion picture camera led to film. It will be great to see what artists are going to do with the technologies that are popping up around us today, but I think it's important to know that this is not a new concept.

R. Today, you direct one of America's pioneering modern artist, "Andy Warhol"museum, which of all his work would you say is his most provocative?
ES. From every angle, Warhol's entire body of work is provocative, but the level of provocation depends on each individual viewer and their own circumstances. Regardless, Warhol knew how to push society's buttons with his artwork, and as a result was always forging new ground while making certain segments of society blush.

R. It's a big job curating a museum, when your away from all the canvases, what artist or music are you listening too at home?
ES. I hate to admit it, but I'm constantly listening to Lady Gaga. I guess she really is "Warholian" in that she is a master of reinvention and self-promotion.

R. Lets go back in time for just a moment. Andy is around and for his last collection, he includes you as one of his subjects. How would you like to be painted?
ES. As the invisible sculpture.