All in the MIX 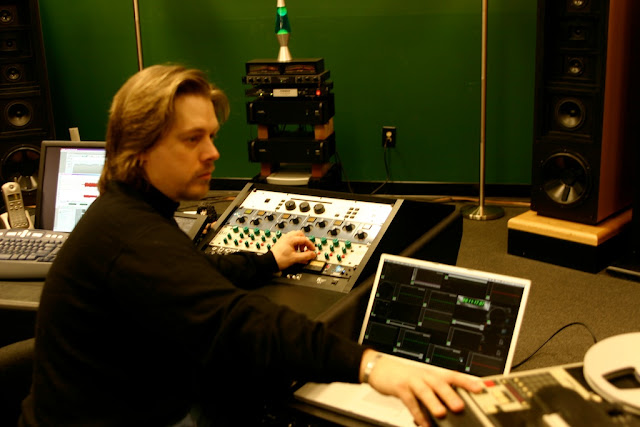 Garrett Haines started recording as a hobby in 1984 and has since mastered, restored, recorded hundreds of projects. He is a voting member of the Grammy Foundation, and an active member in many industry organization, including the Audio Engineering Society (AES), the Acoustical Society of America, and the American Society of Composers, Artist, and Performers (ASCAP). Presently, he is the owner and chief mastering engineer at Treelady Studios in Pittsburgh, PA.

Garrett Haines is also a Senior Contributor to Tape Op Magazine, one of the most popular recording publications (having served as recording tips editor for five years). He has over 200 articles in publication around the world. His writing has been featured in Tape Op Magazine, EQ Magazine, DRUM! Magazine, The Indie Bible, Rockrgrl, The Metro Music Guide, CURB Magazine, Harmony Central and other online audio sites. He was one of the first engineers in the U.S. to become a Certified Audio Pro Tools Operator.

Revolution caught up with Garrett at his studios to get all the insight on working in a recording facility and the master tricks of making a great album.

R. What in the world is a Mastering Engineer? Does that mean you're more senior or better than other audio engineers?
GH. There are different types of recording engineers, each with different responsibilities. Creating a CD/Album/Recording is no different than building a skyscraper or assembling a car: there are discrete phases, or steps in the process. I call this the "Recording Life Cycle". Each phase has a different engineer responsible for its completion. Mastering is the last step in the recording of a record. After the music has been recorded (captured) and mixed (combined), it goes to the mastering engineer. He or she is responsible for processing the music in a way the polishes the best parts, creates a sense of unity- I like to say " give the illusion that a band walked into the studio, played the record, and Cd popped out of the wall." Once that is done, the mastering engineer is responsible for creating the proper files, materials, and reports that are required by manufactures and distributors. This allows the music to be made into CDs, records, or distributed on the Internet. Mastering engineers straddle a wall between art and science. So it's very important to be dual-brained if you choose mastering as a profession.

R. You're a contributing writer for many music industry magazines, is there one magazine in which you would like to write for? What would you write about?
GH. I would like to write a piece for the Economist or the New York Times. Either would be a much broader audience than the recording journals reach. I would like to explain the "dumbing down" of audio, specifically how compressed formats sold by online vendors contain only a fraction of the audio on CD version of the same song(and an order of magnitude less than the original high resolution formats we work on). I want people to know that, in a way they are not getting what they " think" are paying for. I have to be careful here. I'm not saying that the purveyors of down loadable music are thieves; I'm saying consumers do not realize that choosing portability over quality has implications. A typical college student who carries his library of thousands of songs on an MP3-type device is probably the impression that he " has" those songs in his library. Fast forward a few years, as an adult he purchases a decent set of speakers for his home. When he plays the MP3s on these speakers he realizes they sound small, tinny,thin and are a poor representation of music. He's going to feel cheated when he realizes he has to re-purchase his library if he wants to listen to it on anything better than those inexpensive ear bud headphones.

R. If the quality is so poor why don't people hear it now?
GH. Good question. The short answer deals with the headphones most people use. They are not capable of reproducing full frequency music accurately. if you played an MP3 and a high-resolution version of the same song through those throwaway headphones, even the best audio engineers would have difficulty identifying the source. Its like watching a movie through a paper towel tube; you don't get the entire picture.


R. You've been in this business long enough to have seen the many changes and challengers that come with an industry that is almost losing its identity. What is the one thing that keeps you coming back for more?
GH. Being an audio engineer is part of who I am. I tried to run from that fact for years, but I couldn't stay forever. It's a wonderful thing when you encounter other people whose work intersects with their passion. It doesn't need to be audio. I've met plumbers, artifacts, singers, doctors, radio hosts, chiefs, stable managers, people from every walk of life, who realize where their aspirations live and followed them. This is what I do.

R. In all the projects you have done, which one is the most memorable that sticks out?
GH.There have been a few that have been emotionally intense. Last year, I mastered a solo CD for a young man who had lost his wife to cancer. Its always tragic to loose a loved one, but she was in her 20's. He completed the CD because she made him promise that he would not give up music after she died. The material was good, and the songs about her were genuine, powerful, and as far from trite as possible. I don't know how the artist found the strength to pull it off, but I was honored to be part of the process. Since then, I've had a couple similar cases. They don't get any easier, so I treat them as if they were my own.

R. From start to finish, tell us, what is the over-all AWE moment you get when making an album?
GH. I was called in at the eleventh hour to master a release for a popular independent band called The Starlight Mints. For reason I don't recall, things were not working out with the original mastering engineer, so the mixing engineer, Trent Bell, called me to see if I could make a fire-drill deadline. I agreed. For the next ten days we worked around the clock in shifts. I would master a song, say for hours, then transmit it to them over the Internet, and they would evaluate it while I slept. About 4 to 8 hours later I would receive notes and possibly remixed versions of the songs. Sometimes they even added new parts. I had four to six to fix it and two to send it back. They slept while I worked and I worked while they slept. We finally got it done and couriered to the plant the last possible day. About six months later i was at home after a long day. Flipping through the channels I found a mindless comedy (van Wilder 2: The rise of Taj) and about ten minutes into the movie they use one of the songs from Starlight Minds album. I was jumping up and down on my couch. I was like a six-year old. That was a song that I worked on. And it was in that movie and on the television. It sounds stupid to tell the story out loud, but it was a big deal at the time.

Since then, I've worked on other songs that have made movies and in the last three years, their have been more than eight bands/artists that I have worked with that have been featured on national television shows such as Saturday Night Live, The Late Show with David Letterman, Jimmy Fallon, etc. It is really neat to see them in the spotlight.

R. What will become of future recording facilities like yours, say 50 years from now?
GH. No one really knows for certain. We do know a few things. First, as long as someone wants to record live musicians, there will need to be recording studios. The law of physics demand certain spaces, equipment, and expertise to capture certain performances. But the number of large studios is bound to be smaller. It has been well documented what can be achieved in today's smaller studios. With things such as virtual instruments, an artist can record their performance as a series of computer commands, and then have the computer playback the song using instruments that were recorded in others studios by other players. For example, a kid with a $100 keyboard controller, can record in his bedroom and have it playback through a $600.00 Bösendorfer piano from Europe. Does it sound as  good as recording the real thing? If you ask me, the answer is no, but it doesn't need to impress me, it needs to impress the masses. Getting back to technology, I think we're not too far from being able to do a similar thing with specific human singers. (they already have adult and children's choir available as samples). Theoretically, that means I could write a song and have Bruce Springsteen sing it instead of me.

But there will always be a need for experienced engineers who poses a good ear and a knack for combing into a satisfying musical piece. As long as music is consumed by humans, good music will require a human touch.

R. You have a mixed bag of music genres that you have worked with, when you're not at the console, what favorite artist/band puts you in the groove?
GH.I am drawn to melody, regardless of genre. So, some of the artist you'll hear on my iPod include: Alkaline Trio, Manchester Orchestra, The Black Keys, The Birthday Massacre, John Rich, Brad Paisley, Flyleaf, Jim Croce, K's Choice, The Cars, Rick Springfield.sugar,Crowded House, Fat Joe, Usher, NeYo, Steve Earl, Shawn Colvin,ladyton and a lot of classical stuff.


R. In all the projects you have done, which one is the most memorable that sticks out?
GH.There have been a few that have been emotionally intense. Last year, I mastered a solo CD for a young man who had lost his wife to cancer. Its always tragic to loose a loved one, but she was in her 20's. He completed the CD because she made him promise that he would not give up music after she died. The material was good, and the songs about her were genuine, powerful, and as far from trite as possible. I don't know how the artist found the strength to pull it off, but I was honored to be part of the process. Since then, I've had a couple similar cases. They don't get any easier, so I treat them as if they were my own.

R. Captain William"Buck" in the 25th Century has returned home to earth for a mission assignment. You have been chosen among many master engineers to produce an album for a faraway planet somewhere in the galaxy unknown to you.What kind of album will you make for the next millennia?
GH. If they make music they have to be a feeling society, and if they record it they are intelligent. So, regardless of the style, I would want to be part of a recording that inspires, pleases, and moves the listeners. I guess that's no different that what I would want to do in the here and now.