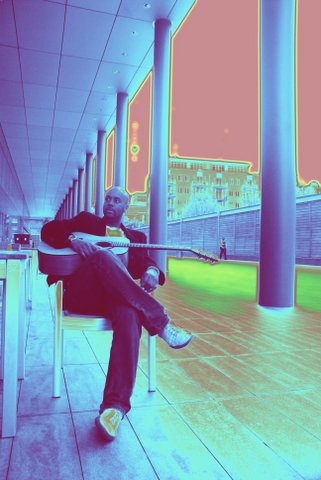 Maurice Fontilio was raised in Hackney (Stoke-Newinton) north of London. His youth was spent standing outside his house with local DJ lads Jonathon (PJ Spoony) mixing in his house tracks with his windows open and the rest of the kids having a beat box competition and mc-ing.

His passion for creative sounds grew over the years  and he later formed a production company called "Thamannzdem" he worked as a talent scout/vocal trainer/writer/vocal arranger, working with many artist from house to indie. His highest moment came when one of his artist tracks was selected to be played on a T.V soup called Eastenders. It later went on to be played on Radio One then signed to Ministry of Sound. That same track was also selected to be apart of Peter Tong album selection.

Fontilio's style is electronic RnB, house, dance, DnB and Dup Step with a twist of soul melody, his voice is reminiscent of Gnarks Barkley and that of Roland Gift from the Fine Young Cannibals. With varies tracks under his wings Maurice Fontilio's infectious beats are proving to be a good reason to pump up the volume.

REVOLUTION caught up with Murcie and spoke with him directly from his home in London to talk about the London Beat.

R. Back in the hey day, London was the pulse for boom box music and experimental house music. Tell us about that time and what's HIP in London these days?
MF. I remember at DJ Spoony house, chilling with his younger brother, we heard loads surf. Back then it was mixing the old tunes with the new, not to mention all the park parties that were going on that time. The only difference is back then it was free, anyone could get hold of the mic and ride the rhythm, North London was buzzing and still is buzzing with new talent bringing in the fresh unique styles. Where I was brought up (Hackney) we had most of the top underground DJ's all in one area.

R. We have seen some great RnB over the decades, whats your opinion of the way RnB has evolved in terms of turning electronic?
MF. I have to say I've been doing this for ages, but not in the-way how these Americans are doing it, I use words and sentence, they use about four easy words and repeat it and auto tune it. To be honest I hate it and I can't wait for them to get a load of me. They are so screwing it up!! I'm glad that us Brits are not following them in their foot steps.

R. Moby, Mark Ronson and Daft Punk have taken the DJ concept to the next level, experimenting with classical soul, RnB and other relic sounds from the past. How much of your own experimental music is influenced by these great artists?
MF. Almost 100%, I was brought up on Motown and top of the pops so I naturally fuse them both together. I wouldn't call myself an RnB man, don't get me wrong I love RnB but I love experimenting and have been doing so since as long as I can remember, which has been confusing for many people because they can't put me in a box to which they can resolute to, so I get a lot of "you should stick to one genre/style." I've been fighting that for a long time now and I very happy that I have stuck to it.

R. What are you working on next?
MF. Drum and Base, I'm trying to bring Drum and Base back to the commercial world. Naturally Uncle Momo will have a huge influence on the vocal side of things, so once everything complete, I can't wait to get DJ's to get their hands on it.

R. When you're not mixing your own tunes, whats playing in the background on your iPOD?
MF. Ryan Leslie I just love everything about his work and what he does.

R. You got a one way ticket to Mars the planet, to make your journey memorable what 3 things will you take with you...?
MF. Guitar just to hear how it will sound in a different atmosphere, that blue bird Xmen in who can change into any person, and my scooby snacks!!