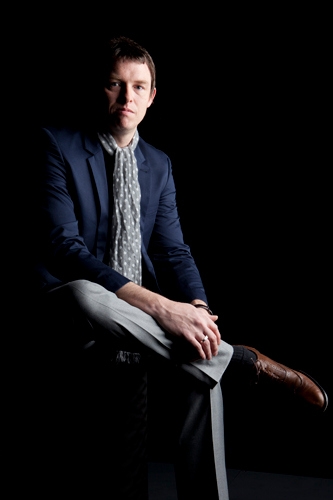 John Cade was born in Dulwich in 1977 raised in southeast London's  council estate in Demarkhill, Camberwell during the 80s with his mother and sister. His mother brought him his first guitar when he was about 7, but it was his acoustic guitar teacher in primary school at the time Ms. Sharpen who taught him three chords and that would set the journey for this English lad.

His musical influences growing up in his household were all influential artists such as: Otis reading, Sam Cook, Diana Ross along with the more renown, The Beatles and The Rolling Stones. It wasn't until 1994 that things started to make a difference for young John and with the British pop scene changing and exploding he heard a riff coming out the radio that would have a huge influence on his direction of music. He was hearing "Supersonic" by Oasis and that was the seed that got planted. Noel Gallagher brought the guitar back because it was dead during the 80s. John later formed a band called "The Scene" which was managed by Pat Barlow who was the ex-Status Quo manager, back in the early days he managed to get some great gigs at "The Shed" up in Birmingham in front of 2000 people, the Bar Fly, The Litton Tree and other hip places. After 6 years together  the band parted ways and have not spoken since. Since then John Cade is a newly reformed modish man who's influences have changed and so has his music. He currently has  2 new singles out and he's currently working on his solo album.

Revolution caught up with Cade directly from London to talk about his new tunes and the new man he has become.

R. AS a young boy growing up on a council estate in Camberwell UK during the 80s when did you realize you wanted to be a musician?
JC. It was about the time I was 7 years old when I first picked up the guitar my teacher at the time was Mrs Sharpen she taught me 3 chords and that was it. I was hooked but after a while I kind of lost interest in it, it was much later I knew I wanted to be a musician.

R. It wasn't until 1994 that you got your first epiphany, the British pop scene was exploding and heard one day on the radio a guitar riff that changed your course. Tell us about that moment?
JC. Two words Noel Gallagher, it was like he was sent down to show me the way. I was at home and my mum had the radio on she always had the radio on in the kitchen and it was a new single by a new band called Oasis and the song was "Supersonic" and going back to the first question that's when I wanted to be a musician. The explosion of  the Brit pop culture was like going back to the 60s,  it was a great time for British music.

R. You later went on to form a band called The Scene, what were some of the highlights you had?
JC. When I left the band, the only highlight was having our manager Pat Barlow ex-Status Quo. He sadly is no longer with us.

R. When you think of all your musical influences, what artist/band today is playing on your iphone?
JC. On my phone at the moment is Paul Weller live at the BBC, Wake up the Nation, The Small Faces, Noel Gallagher's new one and Step Inside by me.


R. What's your view today on how British pop has evolved?
JC. It's hard to say, it's evolving all the time with every new artist and band that comes out. Some would say that British pop has turned into reality show singers, don't get me wrong I've got nothing against that but I see there is so much talent being over looked that have been doing the circuit for years.

R. What are you working on now?
JC. I'm currently recording my Album "Nowhere To Run" which could be out January, also the third single from that album will be out in November called "Searching For You" which has been compared to The Kinks by my manager Chris Matthews. I've also started my own label called Steele Records UK so I'll be busy for the next couple of months.

R. If you were a candy bar, what would it be and what artists would you want to pick you from the jar?
JC. That's a hard one, but I'd be a good old fashioned British stick and the artists I'd like to choose me would be Paul Weller, Bob Dylan, Johnny Cash and The King "Elvis Presley"
Email Post