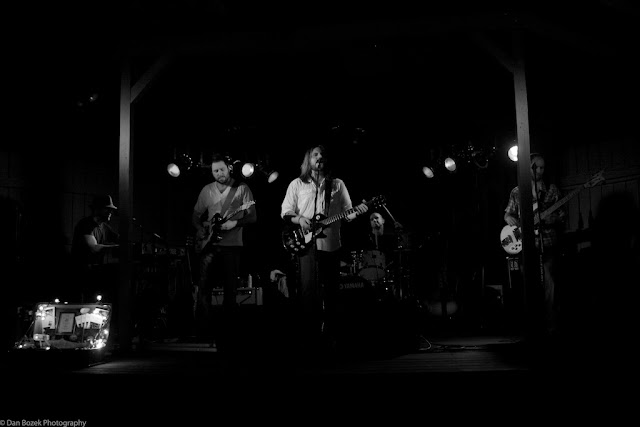 Forming in 2007, from an accidental meeting Christian Gray and T.C Davis, The Sparrows, an original American band from Beaver County PA, have been making a lot of positive waves in the music community-and delivering a brand of rock n soul all their own.

The Sparrows bring an authentic rock vibe to the singer genre. Influenced by everything from Tom Petty & the Heart breakers, The Black Crows, Rolling Stones, and The Band, to Motown and R&B...They all draw inspiration from the same well.

Following momentum of their received, high energy live performances, The Sparrows released their first CD "Black in the Red" near the end of 2009 and are currently hard at work writing and recording tracks for their new album "Magnolia Sessions" due at the end of this year 2011.

Revolution had the pleasure of catching up with lead man TC Davis (Tom) to chat about his latest works and what puts him in the groove.

R. You guys are the talk of the town, where would you like to go next?
TC. We (Corey, Chris, and myself) started out five years ago with no "plans" to speak of, but to stay together and make the music we love. We've stuck it out, and the fact that folks are loving it as much as we do...sort of leaves the future wide open for us. We want to travel and get our music out to as many people as we can. Where would we like to go next...? Wherever this road leads us. We are having way too much fun to stop, that's for sure.

R. With an upcoming album yet to be released later this year, what can your audience expect to hear?
TC. This next album will be familiar Sparrows signature sound, with a little maturity. We've had these stories on the "drawing board" for a while, and over time...songs age, and become what they were meant to be. The first album was really just a simple demo. It was recorded quickly and the songs were very new to the band. Even playing the songs from the first album now, they have matured and found they're "groove". They sound better live than on "Back in the Red". With the new album, our fans can expect to hear songs that have been really tested... and are truly ready to be put on an album. It's gonna be a collection of new stories, set to that Sparrows rock n' soul sound. we're all really excited to get this next work out to the fans.

R. Your musical influences stem from Motown, RnB and Rock, would you guys ever consider trying something different, Jazz, Funk or PUNK?
TC. I love The Band, Ryan Adams, Gram Parson, The Black Crows, Tom Petty, Motown, Old 70's outlaw country, and great stuff like that. That Stuff really vibrates the soul for me. Right now I listen to a lot of Steve Earle, Marc Ford, Truth and Salvage Co., The Drive By Truckers, (etc)..and if I had to say what album is wearing out my iPod at the moment, it would be an older WILCO album called "Sky Blue Sky". The song "Impossible Germany" is great for windows down highway cruisin...

R. Which influential artist of this decade would you consider to be iconic, and if you could do a duet with him/her what song from the past would you sing?
TC. Jeez...well, I think we will see great things from like Mumford and Sons, & Kings of Leon...bands that still write their own music. icon is a big word. I think it's used a bit "loosely" nowadays. i think of "Icon" and Willie Nelson, or Tom Petty or Ray Charles come to mind...I'm not sure this decade will produce such talent. Standards are a lot different today. Pretty first, talent second (or third)... it's a mess, (haha)... but to answer the question... I think it would be cool to do a cover of an old Stones tune, say ("Wild Horses") maybe Jennifer Nettles and Kristian Bush (Sugarland). They have a lot heart & Talent and a unique voice that stands out.