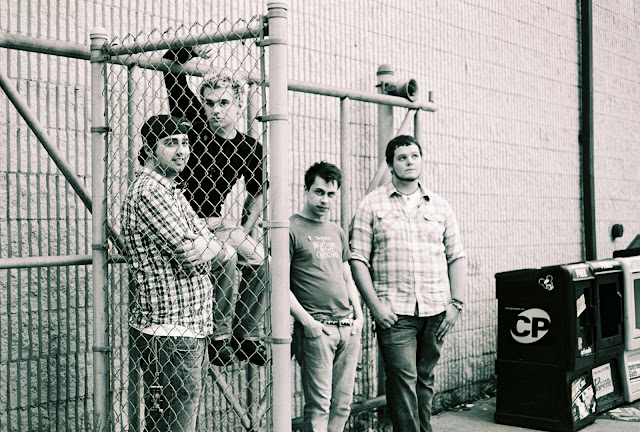 Hitchhiking is owed a large debt  to the forming of The Show. This how Johnny Saint-Lethal in 2005. From Albuquerque to Pittsburgh, the two talked music and ended up playing several shows together as solo artists. The Show was formed two years later when Saint and Mitchell decided against their prior inhibitions, to form a band, sharing lead vocals and songwriting. Jeff bets, responded quickly to an ad asking for a bassist for The Show. William Ringo(Drums) joined soon after. After five months of rehearsals, the group sold out their first hometown show at Rex Theatre. Numerous TV and radio spots, as well as a brief tour later, the band returned to Pittsburgh and narrowed down 200+ songs to a strong repertoire in order to focus on what eventually would develop into debut LP "Here's To Your Jigsaw".

The Show are known just as well for their electric and volatile performances, as they are for having an aura of mystery caused by rumors of in-band romance and fighting. This stems from Saint and Bran refusing to ever talk about "personal" issues within the band to the press. The band toured Eastern US in winter of 2010 and in the UK in the Spring of 2010 in support of Here's To Your Jigsaw. Four singles from the album have been played worldwide, with two of them, "I Don't Mind", and "Black & Blue" going into light commercial rotation in the US and UK. William Ringo replaced Krantiz on drums in 2010 for professional reasons. With the success of "Black & Blue", and the imminent release of the double-A-side single, "Milestone/Take This Gun", the band is doing several live radio appearances across the country to further support Jigsaw, which has been picking up in sales thanks to radio play and soundtrack placement of "Take This Gun" in a 2012 movie, "Honesty". A Fall '11 US Tour is expected as the band are currently recording demos to find a producer for Jigsaw's follow-up, and a label to call home.

Revolution caught up with Johnny Saint-Lethal from his hometown in Pittsburgh to chat about whats on his mind...

R. Since your return from touring in 2010 whats been happening in the mix?
JS. The band has been developing  the aspects of our sound that we feel are unique to The Show, and focusing on really finding what makes us, well, us. We toyed with the idea of going back out and touring Here's To Your Jigsaw a bit more, and we still might. But we had over 100 new songs we'd been playing at rehearsals, throwing in a couple at live shows, and decided we needed to do a proper demo of them. We worked with Dyan Ray and Rae DiLeo on some of those songs. Dylan helped point out some of the flaws where DiLeo really helped point out zero in what made us strong as a band. Now we are just focusing on making a second album that we can look on in ten, fifteen years and say' there's not much we would have done differently'.

R. You had a great response to some of your earlier tracks, what can your audience expect this time around?
JS. Well, we've started to play some of these new songs live when they're not being professionally recorded. There's still the occasional You Tube or Sound Cloud "leak", but for those who have seen the new material live...it's still growing. The audience, be it live when we're "testing" out these songs, or when the new album is finally out, probably can expect something a bit braver, with stronger melodies and much less generic lyrics. Brandon Mitchell, the other front man/songwriter, and myself, I think are a lot more raw and open in our writing now and we're really favoring those types of songs for this next album and these new tunes. At the same time, we're trying to have the space and feel of the 90's psychedelic music in there...or the new wave of psychedelic that Exit Calm (British Band) are at the forefront of. We've been influenced by the 90's shoe gazer music and the 60's space music. In a nutshell I think we're making psych-pop to a degree. But it's grittier than pop music. I can't see them ever playing it on a Top 40 station like Foster the People or Nickelback.

R. Whilst in Europe, how different is the music their compared to that of here in the US?
JS. Europe embraces sounds, lyrics, words emotion...They aren't all about showing-off or looking at the part as an audience. The bands are more about LIVING the life rather than just going to fucking Hot Topic or Pac Sun and getting an outfit for a gig. The European attention span is much more forgiving, as long as you've got something to say or something to make someone feel. Where as in the US, you got to be very generalized and sing about boys and girls and Romeo and Juliet and being fifteen and getting slizzered. Everyone's afraid to get to the heart of the matter since September 11th...so we've been reliving the 1950s and 1980s Bubble-Gum all over again in the States. History Repeats.

R. How much has social media influenced your career?
JS. I tried to fight it, but I gave in. Evan Bran gave in and he hates even using a cell phone. First Myspace, then Facebook. Now Sound-cloud. We've been able to reach a lot of people with sites like Reverbnation and Facebook...more than we would have(other than touring). I do a rant  every week on reverbernation.com/TheShowOffical and that gets about 12,000-15,000 reads per week, which excites me. I either delight or piss people off so much that they go ahead and end up checking out the music.

R. Tell us a bit about this up-coming single you did for this, yet to be released movie in 2012. How did that come about?
JS. Oh, we just got lucky with this Irish writer who is into Americana and Bonnie & Clyde. he wrote this fantastic screen play that Mirimax liked and it's in preproduction and they chose"Take this Gun", and "I Don't Mind" to be in the movie at some climax-type parts. i was touched by the whole thing. But you know how long movies take...as long as albums. So I'm just hoping it's not a Chinese Democracy situation, because I'd like to live to sit my butt in a comfortable movie chair and hear my best friend and I in the background from the big screen in enormous THX surround sound.

R. What all time favorite band or artists do you listen to that makes you feel fuzzy and wazzy?
JS. Right now nothing really beats Bob Dylan, The Verve, The Shins, Oasis, Divinyls, green day, Brand New. Brandon's quite into Built to Spill, Saves The Day and a lot of British folk these days. I mean, I'll never get sick of listening to "On Your Own,"by The Verve. Its simple and spacey and imperfectly genius and has literally saved by life.

R. You have just been typecast for the new Gilligan's Island movie as the lead role of Gilligan also known as " Little Buddy" In the newer version along with your co-host "the Skipper" you are asked to do a duet to entertain on the first evening of the shipwreck. What all time classic will you sing to put everyone at ease?
JS. Do I get to wear the bucket hat? I typically do anyway. I'd probably sing Don't fear the Reaper by Blue Oyster Cult just to be a jag-off. I hate that song, but hopefully someone would get in the spirit and yell "more cowbell" and there'd be unity on the island