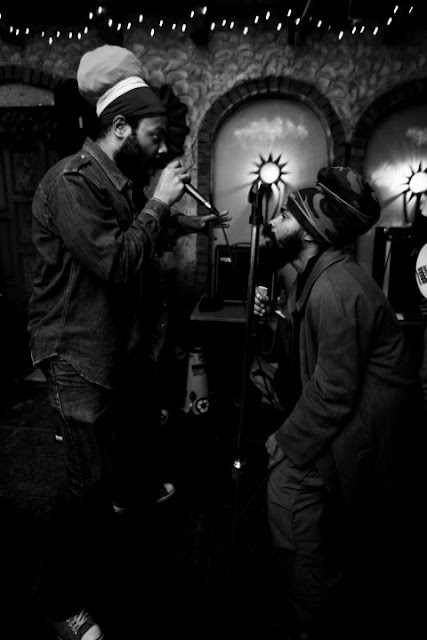 In this high-tech wasteland music has become a distraction rather than a tool for upliftment and satisfaction. King Negus and Jolomite of InI Mighty Lockdown are survivors of the fittest. A hot fixture on the New York underground hip hop scene since the early nineties. Starting with the groundbreaking single Faxing Jax produced by Pete Rock, to Mighty Lockdown's weekly underground performances in NY east village. They made a recognizable mark on Hip Hop's conscious scene.


In late 1995, InI & MLD was reborn as InI Mighty Lockdown...InI MLD (Pronounced I&I). Life has taken the others members onto other paths but Negus and Jolomite continue with energy that InIMLD created back in nineties. They have graced the stage with some of Hip Hop's most notable emcees and groups (The Roots, Dead Prez, early black eye beaus Bran Nubians immortal technique etc...).The group has released three albums independently, the most recent called New Day is some of InI MLD's best work with features from M1 of Dead Prez and Abiodum of Last Poets.

Following completion of the album the ever evolving InI MLD has taken  their sound to another level. Negus assembled the Allstars band, the three piece unit of Eric Willis on guitar, Andrew Thompson on Bass, and Greg Jarvis on Drums. This unit would transform the studio albums into the live  phenomenon their stage show has become. InI MLD has once again reinvented itself this time as a no nonsense genre destroying band with prolific and electric songs and high energy performance with skilled musicianship. Negus and Jolomite with the Allstars remain on the cutting edge and on the "frontline" of this new musical landscape. Their current album "New Day" is making noise and is now available on itunes and all digital media as well as physical copies found at CDBaby.com

I caught up with InI MLD directly from NY to talk about the hustle and flow of their music and new album.

R. The word is out that the new album is doing really well, tell us about this inception?
InI. Well the album came about through long studio sessions and freestyles in the old InI Mld Gates in new Rochelle NY. Working with family like Stud Doogie brand Nubian producer, Kev fever of the Juggaknots my partner I-love HIM( His imperial majesty ) and my Dj/producer Meta-physic it was all in house and a labor of love. We had been performing those songs for a while and it was time to put it down in an CD. This was our favorite and most focused album to work on I got to see & record with fam like M1 of dead prez and abiodun of the last poets and my homegirl Yejide the night queen. Partnering with emcee John Robinson aka lil Sci to help InI promote it helped us keep full control of our brand and message. New Day was the introduction to this new phase of the InI Mld to the InI Mld Allstars !! It's a "New Day" and music is in a state of transformation. InI Mld Allstars are pushing that vibe.

R. You recently brought on some infectious new players to the group, what response have you had from your fans?
InI. The new additions have been a long time coming the universe had it planned before the I.  Eric "Jah wiza" my songwriter partner and guitarist lives two blocks from me and we met by chance thru a mutual acquaintance it was a great link from jump. Andrew "the Monsta" on bass fell into place naturally a friend of Eric's who was in another situation that was not working. He was destined to be my bass backbone and is my left hand man. We had an awesome drummer G. Jarvis but he had other obligations and we are now rocking with Bill Hagg who is our work horse on the skins now. We just added young sax player Herve Alexander and even keys with the homie Quan. The fans have eaten it up and are blown away with the new live set and musical direction. Together we are a force of nature, recognize the Allstars are here and things will never be the same.....:)

R. Hip Hop has transformed over the decades, gone are the days of just busting out a rhyme in once neighborhood and telling a poetic story. Whats your take on where Hip Hop is today?
InI. Hip hop music is now a corporate enterprise with one pursuit of monetary gain and dumbing down of the music. With that said the culture of hip hop and music in general is turning out good quality conscious music the masses have to search to find. So it's in the hands of the listener to make the decision to turn off that crap on the radio and go look for the real shit online since there is no record store to go to. The Allstars want to push the envelop and make music that defy genres and is timeless like the stuff we grew up on. Hip hop is the reflection of the people and it will reflect what they are going thru it's a crazy time so the music is crazy when the people get conscious the music will too. I think we will see some real progressive stuff coming soon.

R. You've had some transformations over the years and worked with some mighty fine talent, whats been the highlight so far?
InI. You know there has been many..meeting alot of my favorite artists, like blessing lauryn hill with one of our eye tree baby tees and she rocked it in her spread in rolling stone magazine, it jump started me a Jolo into knowing we could get our message out one way or another and we started out Authentic I wear tee shirt line. But one of my close to heart highlights were rocking this street festival in Nyack and my then 7 year old son got some cardboard and got busy in a circle while we rocked it was ill he stole the crowd. Performing at Roberto Clemente stadium with my brother in law Pedro Capo was a real big highlight for me my biggest audience and I barley speak Spanish I felt like a rock star lol it was an omen of things to come... Ha ha ha

R. The video Ghetto livin shook a lot of people on the dance floor, where did the video take place?
InI. We shot the video in almost all five Boro's of NYC. It was my brother Dj Metaphysic ( rip) who had the concept and between him and my man Edwin from Spectrumatic we spent late nights in Harlem at my people g.o.d and Nancy's crib filming with M1 and all day in Bk,Bronx and New Rochelle at Jolo's kitchen, it was a lot of fun and making it all go down Meta really kept us focused we had a vision I really miss him he was a true comrade and brother.


R. Any plans for the group to go on tour?
InI. But of course I feel we are close to making that happen but we are looking for a good booking agent to put some things together. If you are reading this know we plan on world domination with conscious music... So promoters wipe that sleep out your ears it's a new day the InI Allstars are here.

R. At last minute you've been called by the TV bigwigs from the Superbowl, they're closing artists cancels and they want InI Almighty Lockdown & Allstars to perform and close of the game. What song would you and the fellas do to make it a memorable one for everyone?
InI. My first instinct would be to bun fire on them and  give the tv bigwigs the finger and say no sell out we're not for sale for your commercialized brain washing of the masses. But then I'd pimp the system and their pockets for all possible and perform either "amerikkka" is a terrorist off New Day or one of our new songs "the government" about the police state we are living in and see how fast they pull the plug ... Lol Rastafari know!!!