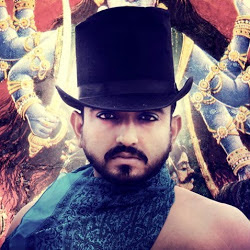 Sanjeev Thomas
Is a singer/guitarist and music producer from India. His unique stage presence and diverse musical pallet touches audiences around the globe with his infusion of India elements into his compositions.

Nominated for 6 categories for his album "Free Will" at the Indiego Music Awards 2011, Sanjeev had the privilege to perform with many international talented artists including John Beasley, Takuttirano, Oscar Season, Siva Mani, Hariharan, Suresh Peters and played lead guitar for Oscar/Grammy Winner A.R. Rahman (Slumdog Millionarie). One of the First Artists of India to be featured on the first episode of Coke Studio @ MTV. He is also the owner of Rainbow Bridge Studios dealing with Audio & Video productions in Indie, Advertising & Film Industry.

Revolution managed to take Sanjeev away from his busy schedule and get insight scoop about being the biggest rock star in India.

R. What an amazing year you had, last year with 6 nominations. What are you currently working on now?
ST. I'm currently working on my new Video Single "Tanha", releasing soon. Also working on a couple of collaborations with a couple of talented musicians and singers like Suchitra, Naveen Kumar and Ashanti (Srilanka). I also have new shows lined up with new presentations and collaborations this month and the next which I am very excited about.

R. In your own words how would you compare the music industry in India compared to that of the USA? Has western music dominated more over traditional ethnic music?
ST. The industries of both these countries are very different. In the US, its very organized and it is always a bigger market as it accounts for the whole world. The Indian music market on the other hand, for the past 10years has been very focused on the Indian Film Industry (Bollywood). and it is still very disorganized in terms of avenues, marketing and alternate modes of business. Also Independent music has considerably taken a back seat with the advent of the vast dominance of film music. Traditional ethnic music always has its place in our culture, and has always survived as a parallel niche. Western music has had a huge influence on both film and Independent music these past years.

R. What artists have influenced your music and style?
ST. My earliest influence began from the Bee gees when I was about three.In school, Influences moved to the grunge era with bands like pearl jam, GnR, Nirvana and others.  It later moved on to 60's & 70's Rocknroll with artists and bands like Jimi Hendrix, Led zeppelin, Guess who, Ten years after and many others. Currently I'm influenced with all genres and all kinds of artists from Skrillex to many Indian and Pakistani artists.

R. So when your not on stage jamming out with big acts, who do you listen too when your at home just chilling out?
ST. Skrillex's new video bangarang.

R. India is rich in mysticism and belief of reincarnation of the Gods and Goddess. Ganesha, Shiva, Vishnu, Krishna and many others all brought about changes and enlightenment. Out of all the Gods which one would you like to reincarnate and what would you do differently in the 21st Century?
ST. Well, I'm an Indian Christian. My wife is a Indian Hindu Brahmin. To me religion, was a need in the past to control and influence good law and order. But yes no doubt, I am a spiritual person and I have truly been inspired with the lives and legends of all religious persons and religions. If I were to be incarnated, I would wish to be Lord Shiva, But I know deep inside I'm more of a Buddhist than a destroyer like Shiva. To look deeply into one's self and respect all forms of life is truly the need of the 21st century.