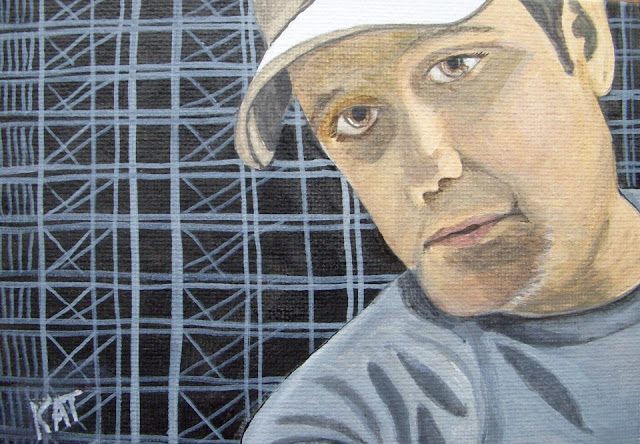 Chuck Fox was born in Abington, Pennsylvania, outside Philadelphia, in 1962. His father Charles Franklin Fox was a senior executive with Sears Roebuck & Co. His mother, Barbara Fox was a homemaker/artist. Chuck grew up in Glen Ellyn a suburb of Chicago and attended the Wheaton North High School and College of Dupage.

In the sixth grade, his teacher asked the class to interview a person who was like what they wanted to be when they grew up. Chuck wanted to be a hockey player. So, Chuck dialed up Pat "Whitey" Stapleton. Number twelve. All-star defensemen for the Chicago Blackhawks.

Pat was gracious to the kid during the interview, even brushing off the network film cameras so that Chuck could get the early exclusive. After the session, Pat suggested Chuck help out around the rink and get free ice time. Starting as a rink-rat, gradually moving his way up to team equipment boy. Chuck never forgot that.

A couple of years later, Chuck was heavily involved in the production of major rock concerts for celebration/Flipside productions at the International Amphitheater from 1979 through 1983. Working as a runner and production team member, Chuck was the Midwest liaison to the production personnel associated with major rock talent. Coordinating with the promoters, artists, technicians, and local crews to ensure that requested production needs are promptly managed.

From creating "The Big Idea" to developing a workable production plan that brings it to life, Chuck offers an imaginative stream of ideas together with seasoned skills in creating, writing, producing, and directing old and new media communications.

A star veteran in his field, I caught up with Fox from the windy city to chat about the his views on the changing world and the entertainment industry.

R. Over the decades you have seen the many changes in film & television, would you say it has evolved for the better?
CF.Without question, film and television has evolved ever-so tremendously. When I started in the engineering department of a TV studio as a young kid, barely twenty, we were working with 3/4-Inch U-matics, which were notorious for many technical shortcomings. We had great three-tube cameras that shot some really clean video, but because of the u-matic tapes and generational loss in the edit process, the final master output usually looked like shit. Professional BetaCam and BetaSP formats eventually solved this problem.  But you needed big money for this level of pro video stuff.  One Man Camera packages at $1200 a day, $350  Per Hour Online Editorial House Rates. Grip trucks.  The stuff adds up real quick, as the barrier to entry starts at $25,000 and ends around $250,000 for a series of corporate training video modules or executive messages.

Today it is all one and zeros and the ability (or to some, the inability) to get a good image recorded has become minimal at best.  Cash to entry is a now $2,000-3,000 at best for a good HDCAM and Final Cut Pro on an iMac. . The technology is near fool proof to some extent, but the appropriate use, some might say, the production and storytelling values of these tools, are not fool or idiot proof.  So far, you still need talent and know-how.  Who knows how long that is going to hold ;)

Like that old saying about wine,“The bitterness of poor quality remains long after the sweetness of cheap talent is forgotten”

R.The digital world has proven to be a tour de force in the way we communicate. In your own opinion, are we more intelligent than ever before? Or are we all stuck in a parallel world of chaos where digital devices have diminished the human spirit?
CF. I think we are humanistically doomed because of the non-essential acts of the digital lifestyle like constantly texting and looking at incoming texts.The sad digital minutiae.  The data mining hydra known as Facebook has connected all of us yet disconnected the rest of us at the same time.  Social media burn-out is rampant, yet we keeping checking the incoming for another hit.

At the same time, I do believe these same digital tools have empowered the weak, woken the sleeping, and hardened the fearful.

We are on the whole, becoming hugely digital in an almost evolutionary step.  It is who we have become. It is a huge paradigm shift for us, going analog/human to digital/automaton.

I think the real problem has become societal fragmentation.  In the old days, everyone gathered around the radio or the TV set to catch the one of three shows being offered and everyone knew what everyone watched or listened to last night because they all did the same.  Now you have your music, I have mine, the guy up the street has his.  And we have lost that connection that kept us tighter as a society.  We are now just loose fragments of an old whole.

Remember When the Music
by Harry Chapin

Remember when the music
Came from wooden boxes strung with silver wire
And as we sang the words, it would set our minds on fire,
For we believed in things, and so we'd sing.
Remember when the music
Brought us all together to stand inside the rain
And as we'd join our hands, we'd meet in the refrain,
For we had dreams to live, we had hopes to give.

R. As a writer, where do you get your inspiration from and are you working for on any current projects?
CF.Eavesdropping.  Driving in a car.  Drinking in a bar. Listening to people who don't know you are. Seeing things different.  Live editing.

When I come up with a new script or story idea it usually starts with the title.  For some odd reason that is how I have always begun the process.   The title drives the search for the story.

I am always writing in some capacity.  If I am at a bar drinking, I will be begin some level of writing at some point.  General notes and the fleshing out of new ideas.  Overheard conversations.

As for projects in the My Butter category, I am currently putting together a pitch tape/sizzle reel for a top-secret rock and roll TV program based on an idea that is way ahead of its time and ready for production deployment.

And dilly-dallying around on a new script, Chasing Snowflakes, about an Audrey Hepburn type living in the East Lakeview area of Chicago.

At the same time I could be writing copy for a business video or website, so it depends on whose butter is being churned at the time - Mine or Theirs?

The majority of my career experience has come from developing and creating media programs for corporations and entertainment clients.

These days I don't do video, or websites.  What I do is deliver "their" messages.  And fortunately for me, the current hot message delivery system is video on the web.

Writers, really good ones, have few variables in the great scheme of things. We create ideas and images from within a fixed set of tools. The workable dictionary hasn't changed much over the past several decades. Nouns are nouns and verbs are still verbs.

Understanding client (or story) needs and wants and taking them to the blank page takes an amazing amount of attention and some years of well-honed skill, understanding the goal, the media, the audience and all of the possible delivery methods. It takes time and substantial communication ability. It also takes an approach that's unique to good wordsmiths.

R. In the past you had the opportunity to work on both video and concert productions for artists such as; Neil Diamond, Van Halen, Yes, The Who, and Cheap Trick. Any dirt behind the scenes you wanna share?
CF.Tons upon tons of dirt "could" be spilled.  Enough to do a Monster Truck & Tractor Pull!   Granted when all this happened I myself was just becoming a young delinquent seventeen year-old adult, so the dirt looks me in straight the face before I dish out on anyone else ;)

Suffice to say, roadies do have, as any professional road crew member will tell you, some of the most gosh-darned, god-dammed stories EVER told from the rock and roll road!

Some of the more friendly bands and crews for me were from Neil Diamond, Rush & REO Speedwagon.  Just good people you would WANT to work for and with.

I suspect my top-secret rock and roll TV program will hit upon a few of these stories from not only my arsenal, but those of my co-writing/producing partners.

R. Musically speaking, you have also lived through some of the great eras, Who would you say is HOT on your playlist today?
CF. I like the National right now. Hold Steady is always holding steady. The Editors! Patty Griffin to bring it all down a notch or two. And I am always on rotation with the Catherine Wheel, Waterboys and Peter Gabriel and anything Van Morrison.

R. Albert Einstein was quoted as saying "A table, a chair, bowl of fruit and a voile; what else does a man need to be happy…What's you take on this theory?
CF. Sounds good to me.  Happy for me is everyone around me is doing okay.  If they are okay then I am okay.  I learned this from a young friend of mine who lost an extremely tough and courageous  battle with leukemia at the unacceptably young age of 15 years old.

Happy is everyone doing okay.  And if, for some people, all it takes is a table, a chair, a bowl of fruit and a violin, then bring it!
Email Post

Scott said…
Great article! Proud to say I know Chuck Fox. He's an all around great guy and certainly the most talented creative person I've ever met. Interesting to learn about some of his other experiences. Thanks.
19.3.12