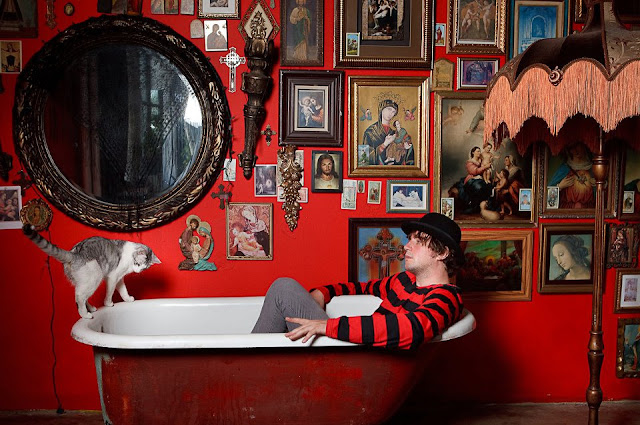 Davide Combusti, a.k.a. The Niro, is a songwriter based in Rome, Italy. His father was a drummer and right from a very early age instilled in him a love for music and the drums, which was actually the first instrument the young Davide learned to play. With the passing of time Davide became a multi-instrumentalist as he added guitar, bass and much more besides to his passion for playing percussion. He then started collaborating with a number of bands as a drummer. In 2002 he decided to pursue a more personal path and formed his own band called “The Niro”, writing lyrics and music to all their songs. After this experience, Davide decided to go it alone as a singer-songwriter and kept the name of the band for his new solo career.

In January 2008 Davide released a 5 track EP called “An Ordinary Man” (1. About Love and Indifference. 2. Mistake. 3. Just For A Bit. 4. On Our Hill. 5. About Love and Indifference –street video). The Ep was just a taste of what was to follow, for mid April a full 13 track album called quite simply ‘The Niro’ was released – lyrics and music for all tracks by Davide Combusti, produced by Gianluca Vaccaro (of Carmen Consoli fame) and Roberto Procaccini, keyboard player with a well-known Italian band. The album came in two versions: cd and limited edition lp. Front cover artwork of the limited edition vinyl version is courtesy of Mark Kostabi, the well known American artist, the same Mark Kostabi who did the cover artwork of “Use Your Illusion” Guns’N’Roses and “Adios Amigos” the Ramones. What is remarkable is the fact that after listening to the album Mark offered Davide one of his paintings of his own accord.

From 2008 to 2010 Davide’s workload multiplied : in 2008 he performed at the 1st May Concert, a live, televised event held in San Giovanni Square, Rome and was given an important evening slot. He then played the Cavea Auditorium, also in Rome. That same year he won an MEI (Indie Meeting) award for best new artist of the year. He went on to play in the same line-up as Gabriella Cilmi, One Republic, Afterhours, Caparezza, Gloria Cycles and dozens of others. He took part in the 2009 Italia Wave Festival (Woodstock 40 years on), where besides performing the songs on his regular set-list, he also gave his own unique and emotional rendition of ‘Summertime’ which was then included in XL magazine’s covermount compilation (XL belongs to one of the two top publishing groups in Italy). ‘Liar’ was used in the first Virgin Radio compilation release along with songs from Radiohead and the Editors while ‘So Different’ was used in the MTV Brand New compilation, with Iggy Pop on the same tracklist. Davide then played Hit Week, the Italian Music Week Event held in Los Angeles, at the Fonda Theatre, as well as playing the famed ‘On the Rox’ venue on Sunset Boulevard. A run of 6 gigs in London was followed by an extended UK tour (Glasgow, Brighton, Leeds and again London), a gig in Brussels and two in Paris. He played at TIME, the Indie Music Event in Paris, and left his mark there as the only artist asked to give an encore !


He also performed at the European Music Fest in Lausanne and played a number of festivals such as Villa Arconati, San Severino Blues, Controfestival… not to mention collecting magazine covers on the way. He has also found the time to connect with various film producers, on his tail to get music penned by him for their film soundtracks, which is another exciting new chapter opening up to exploit the talents of the young, eclectic Davide.

Whilst his new album “Best Wishes” is set for release on 16th April, the young singer-songwriter is getting ready to perform at South By southwest in Austin, Texas, an international event which has for years been an important way for new, and not so new artists, to showcase their talent. Just in case anybody needs further convincing!Whilst on tour, I managed to catch up with Davide to discuss his ongoing success and life on the road.

R. 2011 was a big year for touring, what plans do you have for 2012?
DC. I'm still on tour around Europe, meanwhile I just started writing music for a new release. I feel so inspired these days I'm writing two or three songs every day.

R. After much international success and playing with some big names on stage, who will you be playing with this year?
DC. I've been very fortunate to have shared the stage with some great talent but after touring around Europe, I will be staying close to home and working on a musical movie which will my next project.

R. You voice has been compared to Jeff Buckley, would you say your music is influenced by him?
DC. Not really, but I'd like to say that I love Buckley's family. Tim Buckley was an absolute talent, and Jeff too, so, being compared with such a charismatic and special voice is a great honor for me, even though my influences are different.

R. Life in Rome must be sweet, tell us about whats happening musically there? What are Italians listening too?
DC. Rome is a chaotic city where, for an unknown and magic reason, living flows slowly and romantically. In Rome you can find, the best art in the world, along with, a lot of interesting music, from Jazz "til alternative rock. I recently brought CNN channel, touring Rome for a documentary. I showed it to a few of my American friends and it gave them an insight of just how magical Rome truly is. It's where I get most of my inspiration for my music.

Young Italians listen to many alternative artists, from Spoon to Vampire Weekend. Unfortunately in Italy the media attention has not focused on music (except talent shows similar to America's got talent, xFactor etc...), but there's an underground movement that grows up every day.

R. When you in your own space, what favorite artists or band do you listen too?
DC. I love to listen to Elliot Smith, Nick Drake, David Bowie, Badly Drawn Boy, Sufjan Stevens, Kurt Vile, The Tallest man on Earth. Mostly, I like songwriters, the one-man-show.

R. In your next life what would you different from now and would you prefer to come back as a human again?
DC. I love my life but if I could come back as something I would love to be a cat (meaow).