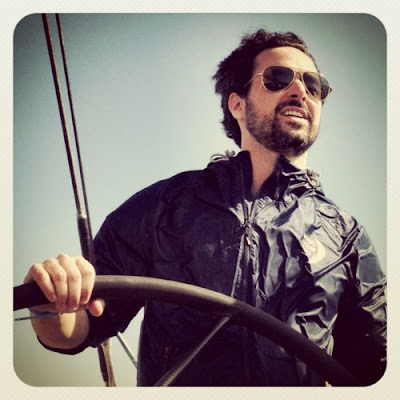 Brian DiFeo was born and raised in a small New Jersey beach town (not the Jersey Shore :) along with his 3 brothers and parents. Growing up a block from the sea and a childhood full of camping and outdoor activities gave him an early appreciation for nature. While in high school he traveled to Costa Rica on a language and volunteer program and he became very interested in people and different cultures as well. He pursued this interest while in college at Hobart and William Smith in upstate New York, where he also studied in Mexico and Guatemala while getting his degree in Cultural Anthropology.

After a few months teaching English in Central America, Brian's academic desires overtook him and he was accepted into a Master's program for Latin American Studies at New York University. Over two years he researched social movements in Latin America, focusing his thesis on the history of human rights in Guatemala. While in Graduate School, Brian began working with Global Work, a company that brings students to developing countries, much like the trip he took in high school to Costa Rica. But after 7 years of living, working, and traveling around the globe, he longed for a more terrestrial job.

In late 2009 Brian became the Community Manager at the Hive at 55, a community-focused shared workspace for entrepreneurs and independent professionals in Lower Manhattan. While he has always appreciated photography, it wasn't until the app Instagram popped up in the iPhone app store that Brian realized he liked taking photos. Surrounded by creative and motivated people at the Hive, he began organizing events with other Instagramers. This quickly led to InstagramNYC.com - a community by and for mobile photographers. Since then, Brian has made a career out of photographing events on his iPhone, and has worked with a variety of sports, fashion, and music brands.

I caught up with Brian to chat about the revolutionary power of social media and get personal insight on where he sees it going...

R. You are the Community Manager for Hive at 55, tells us how this inception came about?
BD. The Hive at 55 is a coworking space, or a shared office for entrepreneurs, freelancers, and startups. It is part of the Downtown Alliance, which is the business improvement district for Lower Manhattan. The Alliance decided to create the Hive as a resource for the growing residential population in the neighborhood as well as a way to diversify the economy of the area. It's been over two years since we opened and the Hive has seen hundreds of businesses work and grow here.

R. We have reached a revolutionary point, where we are living in a digital world more so now than ever before. As a social media expert, tells us what are both the positives and negatives you feel this digital era has had on society and corporations?

BD.The biggest positive I see from the digital revolution is the way we communicate on social media platforms, including brands and companies. I've seen so many examples of customers reaching out to brands on Twitter and Facebook, and brands can engage with their customers in ways we couldn't imagine 15 or 20 years ago. Back then we had the phone and mail, and I remember how frustrating it used to be when I had to call customer support for something. Corporations used to be able to ignore us, and now they have to listen to us. Meanwhile I think the biggest negative for me is I am really hooked on social media as a source of information, and when I am "turned off" I miss out on a lot of stuff. When you are part of an online community, and you stop listening for some reason, you can feel out of the loop. It can be frustrating, but the reality is, I am tied to my phone and computer, so when other parts of life cause me to drop out (digitally) it can be a bummer.

R. You lead a team of mobile photographers who are engaged with the Instagram app. You started the Instagram NYC community. Tell us what happens at these events?
BD. The events are primarily fun, and we do photo walks, scavenger hunts, happy hours, and presentations. Sometimes we meet outside in parks around New York, other times we meet at spaces like the Hive at 55 or bars and restaurants. At every single event there is a great mix of familiar faces and new Instagramers. It is a very open and welcoming community and all you need to do is have an open mind and like taking photographs on your phone. I've made some good friends from this community and I look forward to many more!

R. Away from the hustle and bustle, where do you go to retreat and what artists or band is onthe top of your playlist?
BD. Sometimes it is difficult to get away from the hustle and bustle, but I've been biking to work along the Hudson River so that is always nice. The past few years I've been going up to Woodstock, NY for long weekends with friends and it has been a great time exploring that area of New York state. Also connected to Woodstock, The Band is always at the top of my playlist, and for more recent music I am a huge fan of Dr. Dog. I also recently discovered an amazing folk duo called Brown Bird, give them a listen!

R. You have been asked to go on a road trip around America, your companions are Mark Zuckerberg and Anderson Cooper. Your job is to photographer everything within your sight, Zuckerberg is to make REAL friends, and Cooper will unveil the truth. What if anything, do you think will happen and what will you bring back to share?
BD. Well I am not sure about the company on this trip, but I sure would love to take a photographic journey across the country! Like many photographers, I would probably have peaks and valleys with my work. Similar to writers block, sometimes I go through unproductive phases and I think traveling across the country with a camera would be overwhelming at times. I am also up for new adventures and experiences, though, so if there were times I was frustrated with my camera I am sure Mark, Anderson and I would find ways to have fun and come back with some good stories!