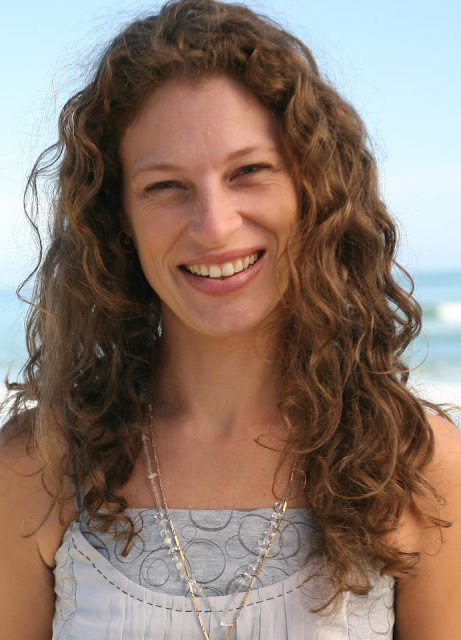 New Zealand born author Lisa Fernyhough is the latest in a long line of writers, artists and ragtag creative folks to make a beeline for Venice, California. Born in Wellington NZ, she is the daughter of an accountant father and nurse mother. Lisa graduated from Otago University with a Master's Degree in Science (Nutrition) in 1997. She says she spent the first part of her life thinking creativity was for other people, and back then, if you asked her opinion she didn't have one unless there was a double blind, placebo-controlled study she could refer to.

In her mid-twenties, Lisa Found herself feeling exhausted and unwell and was diagnosed with Chronic fatigue Syndrome. As a result of this debilitating illness she was barely able to leave the house for almost five years. After managing to recuperate somewhat, Lisa moved to Granity, a small, costal, mining village at the edge of rainforest on New Zealand's stunning West Coast-a.k.a the middle of nowhere, or in NZ speak,'the wop wops'. Population 105. Corner shops: one. Entertainment of any kind: It was here that she decided to open one of NZ's first online bookstore.

Six years later, Lisa once again found herself feeling exhausted, only this time she decided to do something about it once and for all. A friend had once told her that doing nothing and being silent were the quickest ways to change old habits and to heal - so that's exactly what she decided to do. She dropped of her cell phone and laptop to a friend, put the television in the garage, went into her bedroom, closed the curtains and sat in silence for the whole day.

Incredibly, what started as one day turned into three, then into a month, than eventually into what Lisa calls 'her year of silence' - in which she dedicated a whole year sitting in silence in her home on the edge of a forest overlooking the sea, doing a personal, one -of-a-kind, D.I.Y. retreat. During this time, something remarkable happened that few people ever experience, something you might only expect after spending long periods meditating in an Indian ashram: Lisa discovered that she was able to tap into enormous reservoir of inner peace, strength and healing. Due to her scientific background, she was able to observe with some objectivity the sheer madness that happens to your mind when you're silent it's just you and your mind, but the true, wondrous breakthrough is that you come out the other side knowing the difference between two.

After this year of silence, Lisa sold the business, her house and almost everything she owned before moving to Venice in 2011 It was here that she wrote her first book '7 Secrets Your Mind Doesn't Want You To Know About How You Got Into This Mess And How The Heck To Get Out'. She is currently working on 'The Altogether Easy Guide to Life'- a book that draws heavily upon the profound spiritual experience that was her year of silence. This guide is aimed at helping young adults - in what has become a fast - paced, technology - based, social media obsessed world - to step back, discover who they really are what they really want from life. And it doesn't entail spending a year in silence like Lisa did!

R. Some Journeys are more exciting than others. In your life, for example you took a moment to hide from the world. I'm not sure if you're aware most people don't get to do that. So what happened in that forest? What changed and what did you find?
LF. What a really fantastic question. Because the truth is when you're 'silent' you're not hiding from the world, in fact, the opposite is true - being silent is one of few times we STOP hiding! My decision to spend a day being silent came about at a time when I once again found myself unwell and exhausted with Chronic Fatigue. I had this sense I was standing on a precipice of my life remaining the same: that I would continue to make same mistakes, miss the same points and always be too unwell to truly doing things I loved. It was a terrifying realization.

As for what I found 'in the forest?' - I found a lot of gunk, ha ha, that my mind threw up, which is what happens. But also I found a sense of calm I'd never known before. I've never really tried to describe what it was like, so here goes... beforehand I felt as if my cells and energy were somewhat scattered: I lived mostly in my head, I worried about things and had trouble making decisions. After spending some time in silence, and to be honest it was only a matter of days, it was if an energetic keel were forming beneath me. One of the first things I noticed it was easier to make decisions and I felt more relaxed and self assured regardless of what was going on around me. I also noticed I began to feel more empathy and kindness towards others, and I'm not just talking about people I agreed with! These changes just bubbled up from within - I didn't have to try do anything! Which is the truly magical bit. I wasn't talking 'I need to be more empathetic,' I just was.

From this rather unusual time, I learned three things:
1. Most of us live under the misapprehension of faulty beliefs - and it's these that lie at the root of all worry, sadness, anger, frustration and fear.
2. When you give your mind control you block the real source of inner wisdom and life force energy. this is living out of mind/heart balance - and it's easy fixed once you know how!
3. Wisdom and spirituality isn't some mystical thing that only some people can do, it's within us all, and once you know how it all works, it's easier to than you might think.

R. In the USA alone 10 in every 100,000 persons are suffering from Chronic fatigue. The symptoms are long and are different for each individual. When did you initially realize that you had this syndrome?
LF. In my second year at university, although in hindsight, in my last year of high school. I once heard someone say that CFS was a spiritual illness and I reckon its true. Not being able to do all the things you love to do, for some seemingly inexplicable reason is the perfect opportunity for personal growth and understanding! For me now, it's like a self-correcting navigation system - I don't fare well with too much 'hard living.' And I'm grateful for that.

R. We live in a Super Size Me fast food consumption society. Diet without a doubt is a catalyst for just about every disease known to man-kind. In your study would you say that to prevent any illness particularly those of Chronic Fatigue Syndrome can be cued with a mental adjustment of how and what they eat?
LF. I think in part yes. Chronic Fatigue Syndrome, is a disease of overload - whether it;s stress, overwork, poor diet, too many toxins by way of, environment and so on - which is why lessening the load in crucial. The sad truth is that the majority of 'food' in supermarkets nowadays is more a mixture of chemicals.

When I was first diagnosed with CFS, I was 45 pounds heavier, my diet was 'good' but because I was eating foods that my body couldn't digest I was retaining a lot of fluid and it was depressing my immune system. For me when I want to change something I try and tweak the thing at the heart of the imbalance, so things fall back into balance easily of their own accord. In regards to diet, for me it's avoiding gluten, sugar and eating more protein, which I've done for the past 15 years. And it's not about doing without - I eat what I like - including saturated fat, cheese, meat. My diet is rich and wonderful!

R. They say music can also be a form of healing. What artists or band do you listen too, that puts you at ease?
LF. At the moment, one of my favorite is Nanci Griffith singing Tom Paxton's 'can't Help But Wonder Where I'm Bound.' The idea of being bond resonates strongly with me at the moment - it might be something to do with the fact I've recently got engaged or that I live 5700 miles from dear friends and family but then again I love the idea that we're all bound together anyway. And I'm always intrigued by where I'm imposing unnecessary restrictions/binds within me. Isn't it wonderful how one line can stir up so much!


R. In 2011 you published, '7 Secrets Your Mind Doesn't Want You To Know About How You Got Into This Mess And How The Heck To Get Out'. Share with us one of those secrets.
LF. I love the idea that we're all calm, all of the time. this is probably my favorite of the '7 secret'. When it was told to me, I thought 'you have to be kidding!?' But basically it's true. I love the way a friend of mine puts it, he says "We are all calm self assured people, and when we don't feel like this it's because we've got a bunch of stuff on top of our clam distracting us from it, and that stuff is our mind."

R. You're currently working on your second book 'The Altogether Easy Guide to Life' what can you readers expect this time round?
LF. 'The Altogether Easy Guide to Life' is a story of transformation - of standing at the precipice of change, of radical decisions and what unfolds as a results. It's a bit 'Eat, Pray, Love' meets 'The Cynics Guide to Happiness' except instead of traveling round the world 'Elizabeth Gilbert style', much of the story takes place within four walls of a small cottage in a tiny mining village on the south coast of New Zealand!

R. Mahatma Gandhi once quoted "In the attitude of silence the soul finds the path in a clearer light, and what is elusive and deceptive resolves itself into clearness. Our life is a long arduous quest after Truth." what's your take on this?
LF. Isn't that beautiful, thank you. I love the way he says "attitude of silence." because it's not about being somewhere silent, it's having a silence within. The crystal clearness he's talking about is what happens beneath the chatter of the mind: the knowing within us all that we're already completely perfect, the knowing that says which direction to take next, the knowing that loves completely.

The long arduous quest is simply how difficult it is when we don't know this. And I don't mean knowing it intellectually, which is easy, but to know it in our bones. this is the tricky bit!

Lisa Fernyhough
Author, Artist and Easy Way Practitioner
www.LisaFernyhough.com
To get a copy of her book
www.AltogetherEasyGuide.com
Email Post