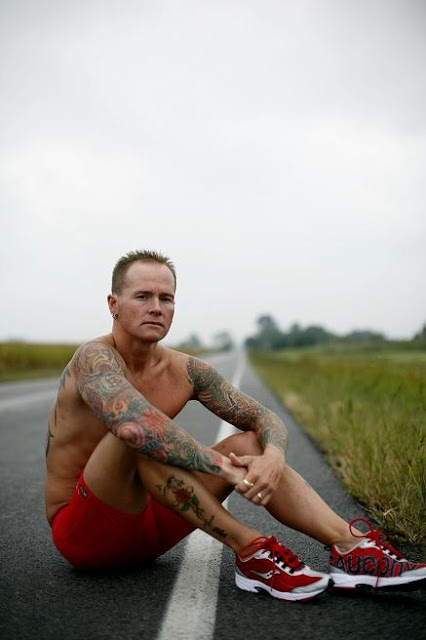 Todd Crandell is a native from Ohio and is the Founder and President of Racing for Recovery. After is his own 13-year struggle with drugs and alcohol nearly destroyed his life, devastated relationships with family and friends and shattered the promise of a professional hockey career. He quit using drugs and alcohol on April 15, 1993 and has been sober and a champion for sobriety ever since.

In the process of rebuilding his life, Crandell realized traditional recovery programs weren't enough. He needed something more. He chose the most grueling imaginable, the Ironman triathlon, a 2.4 mile swim, 112 mile bike, 26.2 mile run. Crandell ran his first triathlon in 1999 and has never stopped.

In 2001, his experience with running these triathlon events and inspiring others on their road to sobriety, led him to form the organization, Racing for Recovery. Racing for Recovery offers professional counseling services, sponsors support group meetings and presents events across the United States in an effort to promote a lifestyle of fitness and sobriety. Crandell's book, From Addict to Ironman, co-written with John Hanc, gives an unflinching accountant of his addiction and recovery. It has motivated thousands in their fight to overcome drug and alcohol addiction. Prior to the book, in 2003, the documentary ADDICT was released.

R. Choice and Consequence are two words that come to mind when I think of your life's journey. At what point did you get that AWE moment when you realized that it was time to make a change?
TC. April 15, 1993. After receiving my 3rd drunk driving charge and registering a .36 blood alcohol level at noon. I believe I got a gift from God and my mom who committed suicide when I was 3 from her addiction to simply say "ENOUGH IS ENOUGH"

R. Most addicts simply seek the common rehabilitations that are provided by their local communities. Why did you choose Triathlons? Was this a conscious decision?
TC. I immediately chose to get back what drugs had taken from me and exercise was one of those. I played hockey again and managed to play semi pro in 1996 and found triathlon in 1999 and really all of this came together when I formed Racing for Recovery to help serve others.

R. Shortly after, you founded your organization Racing for Recovery. Would you say that this achievement in itself has been rehabilitating? What have you learn't about yourself throughout this process?
TC. Forming Racing for Recovery was another Godsend for me. It has enabled me to find my purpose in life. Without question this is what I'm supposed to do with my life and that is to get better personally and professionally and then serve others.

R. You published your biography 'From Addict to Ironman,' to even making a documentary about your life's journey titled 'ADDICT'. It brought much awareness and inspired millions. Any plans to write another book or do another documentary?
TC. Our next book will be out by the end of 2012 and will showcase success stories from Racing for Recovery who have followed our Lifestyles of Recovery and are now leading productive lives.


R. In your own words, when competing in these triathlons is reaching the finish line the ultimate goal? or is there something more?
TC. I do triathlons to promote Racing for Recovery and showcase our slogan of "With Sobriety Anything is Possible" That is what drives me to the finish lines. I want others who are suffering from addiction to see firsthand you can overcome addiction and be all you are intended to be.

R.  Your alone and running, suddenly, you reach a fork in the road. One road leads to all sorts of twist and turns, a washing machine of tumble and dry with much excitement. The other is a straight and narrow road with not much in sight and stale surroundings. Which one do you choose and why?
TC. I choose BOTH because I am a man of experiencing all I can, so it can help me improve on a variety of levels. So I would run one way then circle back and run the other way. I bet you were not expecting that answer but great question my friend.