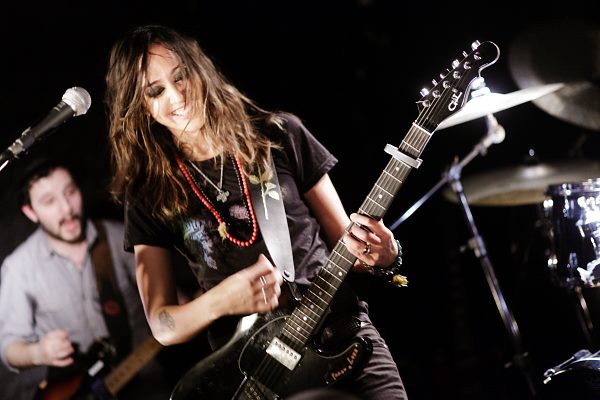 Tarah Who? Is a punk, alternative, indie rock, solo project of musician Tarah G. Carpenter (So Was The Sun, Fräulein, Jane Gray Black Orphan). Tarah has collaborated over the past few years with a number of musicians. Tarah is originally from Paris, France (from Vietnamese father and a French/German mother) began playing music at the age of 14 when she found her passion for the drums. A year later, Tarah moved to Kentucky and because she could no longer own a drum set, she bought herself her first electric guitar. Tarah is a self-taught musician and during her high school years, Tarah has worked with several Rock bands, usually playing drums or bass.

At the age of 21, Tarah moved to Los Angeles, as a musician first, playing drums and bass for other bands, but little by little, Tarah found herself being asked to play her own material, singing and playing guitar. She decided to take her solo project more seriously seeing how people reached to her music.
After four years in Los Angeles, Tarah moved back to Paris, more confident about her solo projects and she began to meet several people who wanted to help her with her first album and began performing as Tarah Who? Tarah also joined other bands playing drums (Jane Gray Black Orphan, Fräulein) and bass with (So Was The Sun). In October 2012, Tarah recorded her second album with musician Pilal, the duo played all the parts and instruments on the self production album, recorded by Francois Maxime Boutault at counterpoint and twin studios in France. Today, Tarah is back in Los Angeles and is  working on her third forthcoming album.

R. Could you briefly describe your style of music?
T. I usually say I'm rock, but people ask me what kind of rock? Truth is, I don't even know! So far I have heard we are punk, grunge, indie, rock, and alternative. I even heard "metal on the edge."As long as we're not called pop… I don't really mind. But to me its still just ROCK!

R. How has your music evolved since you first began playing music?
T. Through my life experiences I have definitely matured in my songwriting. On the playing I think I have become more complicated! But over-all I think I'm just angrier!

R. Talk to us about the music scene in France. Is it as diverse and open as it is here in the USA?
T. Well…yes and no... I'm not the right person to ask! I've had trouble booking Tarah Who? I am a French singer, singing in English. People would wonder why? We're a rock band, and Paris is pretty small... We would always be too loud for the venues. So, yes if you're french, sing in French and play French rock or if you play some acoustic, pop, singer-songwriter kinda thing… you're totally fine and you can play everywhere. Whereas as I am a totally independent artists, who sings in English,  whose loud and in your face. So it's not as diverse and as it is here in the USA.

R. What can you tell me about your instruments?(i.e., Are you subject to brand loyalty or will you play  with whatever is available? What made you choose the instruments you have now? Was it cost or was it a style/model/brand/color preference?
T. The sound, definitely the sound. I play G&L Guitars. I didn't know this brand before and I ended up buying 2 more! I am really happy about my black ASAT guitar and my G&L 5 string bass guitar L2500. I also have another G&L legacy but I m not as enthusiastic of the sound as I am with my 2 other guitars. I strongly recommend G&L, great quality, great sound, great instruments.

R. What can your audience expect from your third album?
T. To be honest, the second album was mainly improvised. I had written all the songs and arranged them with my friend Pilal. We both played the whole album together. Tarah Who? Is still me (guitar and vocals), with Ash on (bass), and Dustin on (drums). The third album should be a project with the three of us.

R. If you had to think of a slogan that could leave a positive impact for everyone what would your slogan be?
T."BE YOURSELF." If you want to make art, be true to yourself. Don't do it because it looks cool, and its trendy, do it because its you… no-one can copy that!