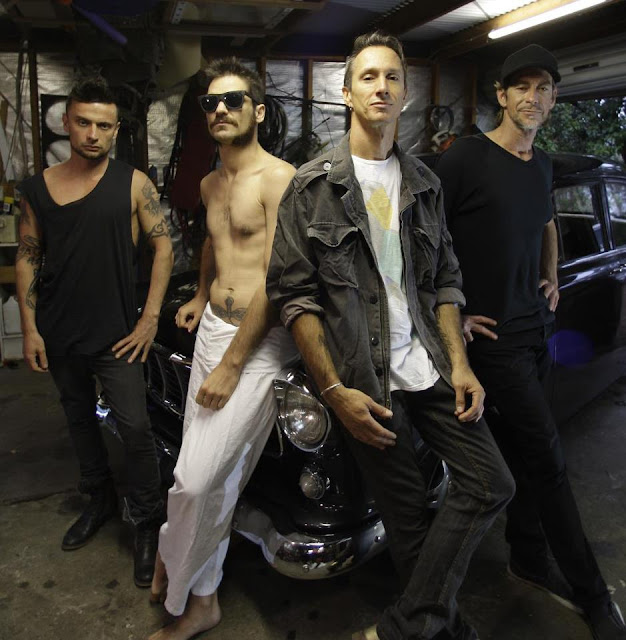 The Nerve is a band based out of Prague, Bondi and Melbourne - Australia. The story of The Nerve started many years ago when Ezekiel Ox was in Full Scale, Lucius Borich was in Cog and Preshrunk had only just broken up. One night in a Melbourne venue, young shredder Glenn Proudfoot spotted Ezekiel fronting Full Scale and immediately knew that one day they would be in a band together. Glenn pursued Ezekiel via skip and email which led to The Nerve's first writing session in St Kilda in 2010.

These tracks were the start of the relationship but were never used. Glenn then went back to reside in Europe and wrote the monstrous riffs that are littered throughout The Nerves up common debut album "Audiodacity".  Time to find a drummer. As soon as Ezekiel heard the riffs, he knew that Lucius Borich was the only drummer for the job. Lucius was immediately inspired and started recording drum tracks from his studio in Sydney, Keysound Studios. Work continued on the album with Peter  "Reggie" Bowman at Screamlouder Studios in Melbourne. The guys wrote 24 songs in 2 months with Glenn in-between Prague and Melbourne, Lucius in Sydney and the rest of the guys in Melbourne. Skpe and large file sharing was the method as each song was crafted. Still in need of a bass player, Davarj Thomas was introduced to the band by Reggie and The Nerve was born.

In February 2013 it was time to test the songs, and remarkably the band met for the first time 4 days before their first gig, and the synergy and chemistry was immediately there. The band released their first track WITNESS out into the world for streaming only and there was a huge response. Recorded at Keysound and Screamlouder Studios, mixed and mastered by Forrester Savell. Their first show was on a Thursday night, and the band played to a packed, steaming and ecstatic Espy Front bar.


The Nerve have attracted a fiercely independent and artist focused industry team. Having secured management with Cross Section, an agent through The Harbour Agency (Daniel Sant) and a label deal with Sydney alt-rock gurus Birds Robe Records, the band has ticked all the right boxes.

This month Australian audiences will get their first taste of the heavily anticipated live experience, kickstarting the Aussie fall/winter with a string of tours.

R. G'day! How did the band get their name?
EO.  It's the point where feelings begins.

R. You've all hailed from prior bands, has these experiences helped shaped The Nerve and the music you play today?
EO. For sure, we are all the product of our history.

R. If you had to describe your music in three or four words, what would you call it?
EO. Well first of all, I choose four, because it gives me more wriggle room! Turbo-Rock-Love-Vibrations.

R. What are your songs about? (What specific themes do they cover?)
EO. The fight to be human, to have the right to a safe home, time with a family that has the time to love you. The importance in speaking and acting against those who try to stop those things from happening around the world.

R. What image do you think your music conveys and why did you choose this type of image for your music?
EO. Hopefully, energy, radicalism and the power of numbers and collective history. We didn't really chose it, we just gave Josh Meney our design guru our music and he did the rest.

R. What has been the biggest challenge for the group?
EO. Getting the same room! We have members in Prague, Bondi (Sydney) and Melbourne, so Skype and email are a natural part of life.

R. What can your audiences expect from your live performances? Any chance you'll come visit us here in the USA?
EO. There's plenty of footage of us playing on live on the internet, YouTube is the best place to go with a solid keyword search. We have people working on the ground in the USA for us as we speak and really believe in our ability to penetrate the minds and hearts of music fans in the belly of the beast.

R. If you had only five minutes on earth to perform one song that could leave a great impact on the world today, what song would you perform and why did you choose this particular piece?
TN. Five minutes? Well Master Of Puppets and Stairway To Heaven are out! I'd say it would have to be Imagine, by John Lennon.