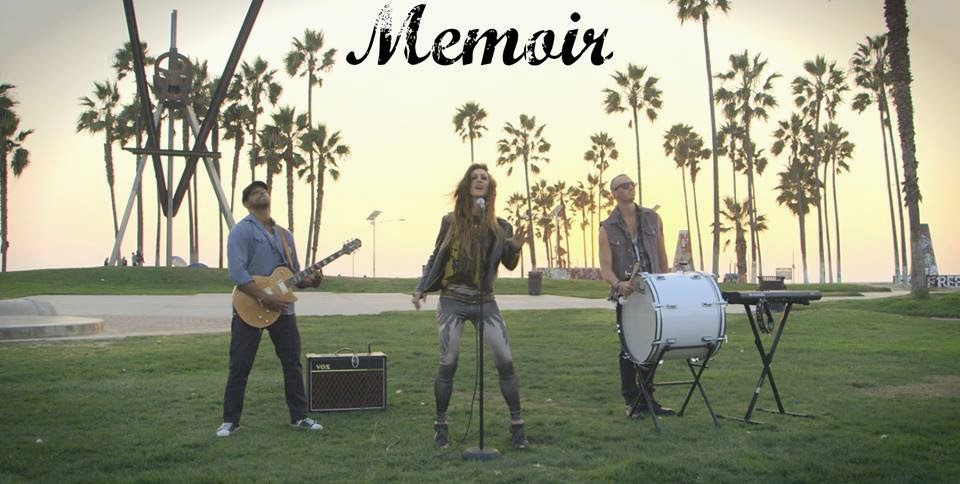 Interview from SXSW -You cannot look away from Memoir’s music video, “Look Away”.  And you cannot get the music of that video, or any of Memoir’s music,  out of your head.  Dena Deadly, Zed Kelly and Remington Garner produce sound and images that are visually commanding, thematically stunning and totally addictive. When they released their first EP last year they put the music world on notice that a new force was now present and it cannot be ignored. There is nothing like this Los Angeles based indie-soul band.


Memoir was formed last year by guitarist Zed Kelley and singer Dena Deadly, who met while collaborating at a recording studio in North Hollywood and later married. Together, Deadly,Kelley and her brother Remington Garner have written hit singles for artists like Cee-Lo Green, Will-I-Am, the Jonas Brothers and Pit Bull. Their music has soundtracked television shows and feature films including Failure to Launch, "The Lying Game" and the theme song for "Vanderpump Rules".

Last spring the trio released their debut self-titled EP, Memoir and then the single "Los Angeles" and most recently a new single, "Who I Am". They are currently at South by Southwest and when they return will put the finishing touches on their first full-length album, "Fire In Me, set for release April 29. They took a few minutes between gigs at SXSW to talk with Patrick O'Heffernan our LA correspondent.

R. Welcome and thanks for taking the time to stand out on the corner and talk with me.
Zed. Thank you for the opportunity.

R. This is your first SXSW isn't it?
Remington.Yes and its wild. There so many bands and so many people. It's pretty amazing.

R. The official count is about 300,000. Were you anywhere near tragedy Wednesday
night?
Dena/Zed. We actually were. We were just finishing up a show down the street at Rusty's and we were walking back to our parking garage and my buddy got a text that the something had gone down and people were run over. This was before the police had gotten there. As we came around the parking lot the police and ambulances were arriving.  There were people lying in the street. It was a disturbing thing, people coming up the sidewalk holding each other in tears. So we went back a block - it was cut off. More blocks, more people lying on the ground, it was obvious that someone had just driven down the entire hitting people. We were just in shock.

R. I am just glad you are safe and hope that this is the last time we ever see anything like this . I have been following you on INSTAGRAM and it looks you have been playing too pretty big crowds  Rusty's was packed for your show. And Lady GAGA was in the building, right?
Dena. She was. It was great a crowd and a great group of people.The talent was incredible. We performed with some great acts... they had some really topnotch acts in there.

R. How does Lady GAGA slip in unnoticed, or does she.
Zed. There was a band playing, Semi-Precious Weapons, in the same club in the other room and as soon as she got there - the place was already pretty packed -  people started gathering around her and no one could get in the club.

R. One more question about SWSX. I know you tried on google classes. What did you think of them?
Zed. They were amazing. Would I pay $1200 for them? Never. Would I pay $100 for them, maybe. But it is very cool technology; you put it on and there is a really small screen up there with a low quality picture, but it's cool. I get it. I would love to rock a pair of them.

Dena. I tried them on. It was cool to take a picture. It is interesting that people could walk around and take pictures. I am a little freaked out by them, not as much as the people in San Francisco are, but it is a little freaky that someone can record you and you don't know about it.

Zed. You could put them on and rock a show and get cues from the stage.

R. I would like walk to around with your video "Los Angeles' playing. About that video and song. This is my hometown you are singing about and I would like to know why you sing that LA will break your heart. How did LA break your heart?
Dena. Oh Goodness. I have been in the music business for a long time, I have been very, very, close to achieving the level of success you see for yourself as a writer and singer and as a performer. We have had a lot of great relationships in LA, and we love LA, I couldn't really be anywhere else, to be honest. That is a song about the many people who come here to achieve their dreams, whether it is opening a restaurant or performing or an artist, and don't . It is a grind, it's a hustle and along the way you run into people who you thought had your back they didn't. It can be rough and you have to be ready for that.

R. You have a line in there that is very perceptive...I may frame it. "Out for myself is such a lonely place". So the song is wise as well as a warning that LA can be competitive.
Dena. Yes, and thank you.

R. Do you have any live shows coming up in LA, or elsewhere?
Dena. We just played live shows in LA, and we are now getting ready to finish the mix on our album, which will be out April 29. So we are coming back to LA to finish cuts on the record and book a new tour for late spring, early summer, probably San Diego, San Francisco, LA, maybe Arizona, Nevada.

Zed. Right now we are getting ready to book our CD release show. Check out out our Facebook, Instagram and twitter sites and our website, memoir music. We will announce the new release party and tour dates. Nothing yet, but soon.

R. Your song and video (click here) "Look Away" is so lush and beautiful. The music is driving, primitive, powerful, hypnotic. Which came first, the video or the music.
Remington. The song came first. We were in the studio and it just felt so right the get-go that we shared it with friends and one of our friends was the director Jason Fischer, who ended up doing the video. he had this vision when he heard it of hat was going to happen in the video and we went with it. It was great to work with someone who was as passionate about it as we were.


R. The video is major motion picture quality. You must have spent some time and money on it.
Remington. Oh yes, from the base level we were able to be involved every single aspect of it. We were out in the desert for the shooting and involved in the costumes and in the video design...

Dena. Jason is an incredible major director, now working on stuff you have probably heard about. It was a lucky break to have a friend who could produce a $50,000 - $60,000 video for &10,000. We actually had the rain guy (special effects) from Titanic" on a discounted rate - that was a gift. We had a Kickstarter campaign that financed the video and we credited everyone who donated. 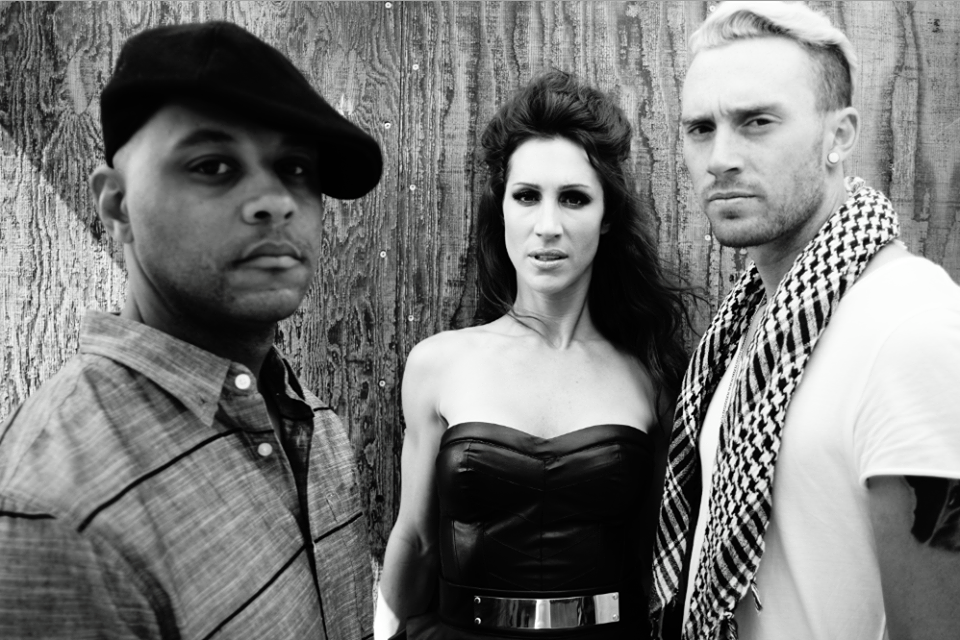 R.There is a line in one of your songs, “Who I Am”, that goes: I am the statement I'm Making’/No need to hide it or fake it. What led to that song?

Dena. We are blessed to be in LA and we are connected to a beautiful community of gay and lesbian and transgender youth and grown folks and  we have a lot of love for that community. That song is about the struggles we see them facing, especially transgendered youth.  These days being gay is becoming more accepted, but transgendered is still something very unexplored and radical. So the song is about all of us who don’t fit in – which is all of us, if we are completely honest about it because we are all so different. We walk around pointing the finger at other people saying “I don’t like that” instead of saying “that’s interesting, that’s different, that’s cool”. There are too many negative judgments sometimes. That is what the song is about.


R. I agree with you and I congratulate you on saying so well and so strongly. We need more people to do that. Let’s talk about your upcoming album. It’s set to release in about 6 weeks, April 29. Will there be any controversial songs , any surprises anything different on it from your past work?
Zed. There will be all kinds of different things on it. Most of the album has been unheard and it is some really epic sounding stuff. Our sound has evolved over the last year so we have everything from nostalgic roots sounding stuff to more epic big drum sounding songs.  Everything in album is done with a lot of technical skill and sound taping. It’s cool.

R. What took you so long to put a full album. You have been writing songs for years and must have huge inventory and you are all so good, why did you wait to produce a full album?
Dena. We worked on several earlier albums. I had a Dena Deadly album and we had another band called Girth and produced several records. It was just the right time for this specific band. My brother moved in with us and my husband and I were working on different songs for television and we said now is time for anew project that is about exactly what we do best and that is a fusion of should and rock and blues and so many different things with a pop sensibility. The timing was just right.

Last but not least..


R. In your song "Love and War" you talk about getting a gun. Where did that come from?
Dena. That was just fantasy. That wasn't about us!! We sat down and said we wanted to create a song for a Quentin Tarantino film... what would that be like? We wee inspired by
Quentin Tarantino and his wonderful movies. Love and War listen HERE