Review: The Brooklyn alt. dance-rock band Cold Blood Club brought their infectious upbeat to Hollywood's literary-themed Hemmingway's, rattling the book off the the shelves and turning the nightclub's library setting into a flashing, smoking dance hall. And it was sooooo much fun. If this is what bands do in Brooklyn, we need to import a few here permanently.

Before the band took the stage at 9.15pm Tuesday night, they installed lasers, reflection screens, projectors and seven a smoke machine to give the room the proper atmosphere for going crazy. And crazy we went. With even songs, they gave the moving and bouncing audience at Hemmingway's plenty to chew on and dance to. They treated us to pure high octane, intelligent dance-fun music that gets your body moving and makes you listen to the words. 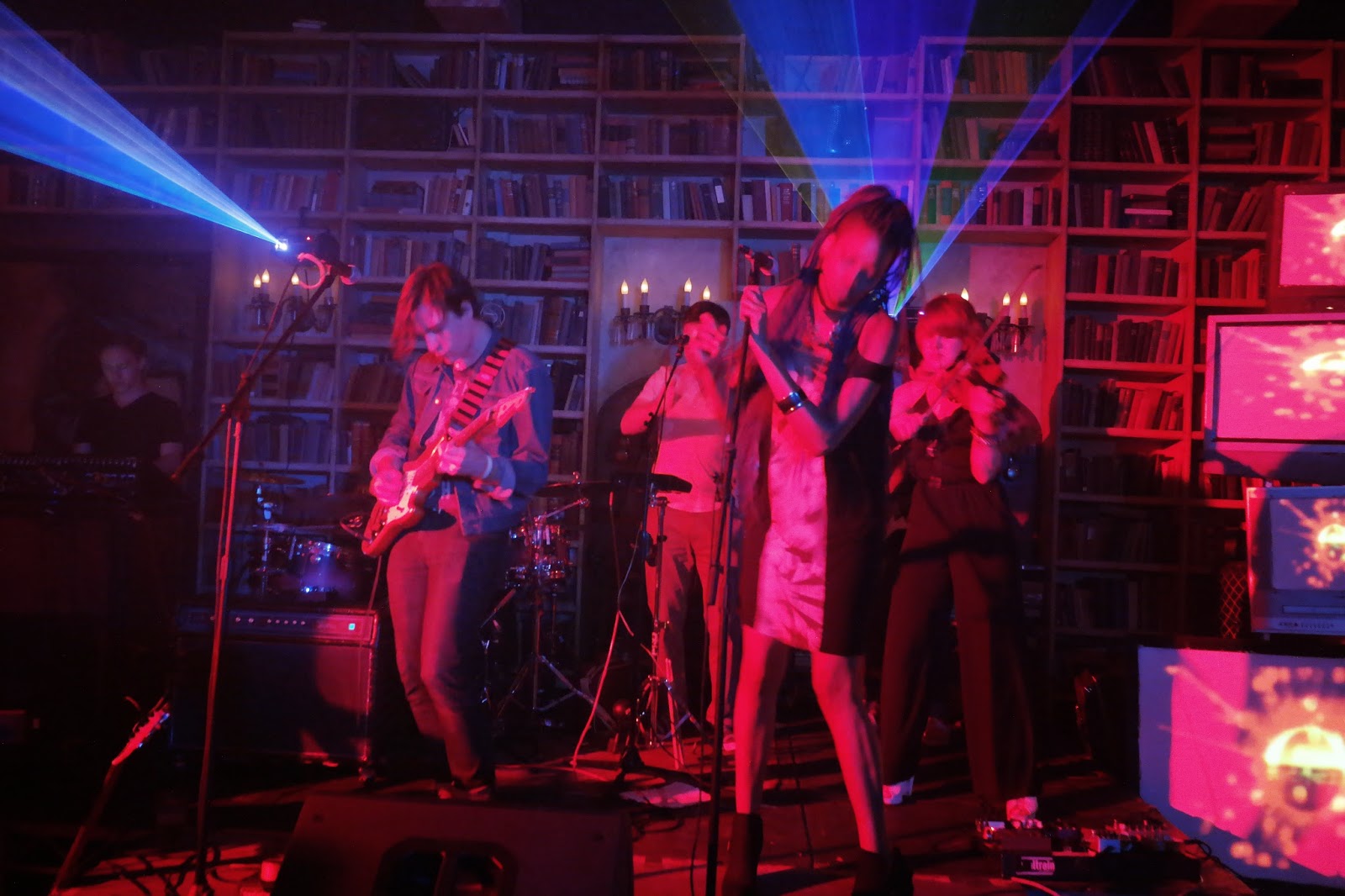 Cold Blood Club founder and band leader Tom Stuart was joined by six of the seven members of the band, all looking rested from their gig the previous night at The Mint, and a little beach time in Malibu. They have been renting a house together in LA, something they do routinely when they travel. Given that the band was formed organically in a process of who knew who and who appreciated whose musical talent, it is not surprising that this is a very congenial group of musicians - not always the case in the band world. Back in Brooklyn, they keep to a strict rehearsal schedule and coordinate availability for travel and gigs with a common google calendar.

The rehearsal time showed, keeping seven people on time, on key and on tempo is no mean defeat, but Cold Blood Club makes it look easy. Their vision of high-concept, high energy alt. dance rock works so well partially because as a band they are very, very tight. Kendra Jones's vocals are precisely intertwined with Hillary Davis's soaring violin and Tom's Fender licks and voice, while Adina Benno creates the right magic on the synth and Shin Kamel and Jesse Reno rock along on the drums and the bass in perfect pitch and timing. At one point during "Michelada" the complex drumming and bass line propelled the entire band in a singular motion that, in the dim red light and smoke, made it seem like a single living, dancing creature. 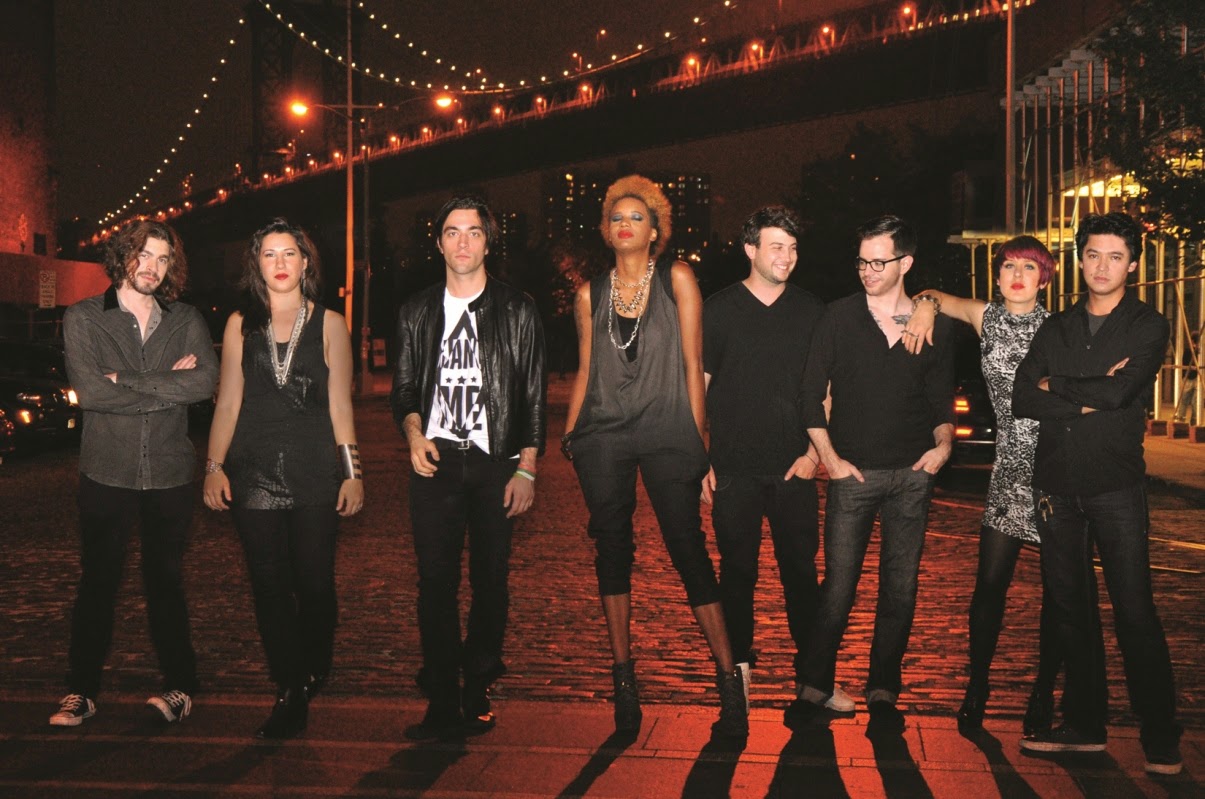 The show started with a new song, "Heavy Hearts", moved on to the anthemic; Ladies and Gentlemen" from the Headlines and Firefights album then on to Freedom" - slated to be their next single. They kept the momentum going with "San Frontieres" and "Traffic Lights" - both unreleased as yet, so the fans at Hemmingway's got a preview. At least one of those songs, "Traffic Lights" will turn up on a new album now in the works. They Cold Blood Club blew the roof off the room with "Michelada", my favorite with its drum patters and complex interleaving of percussion and violin supporting Tom and Kendra's engaging lyrics. I could dance all night to that song and some of the people at Hemmingway's found a bit of space in the crowded room to give it a go.

Fittingly, the band wrapped with "Goodbye to All That", one of the best mélanges of percussion, synth and guitar dance music out there. Shifting from EDM-style rhythms to soaring lyrics like We bled all night/We bled all year/We bled to death/We bled to tears, the band made us all sorry they were ending the set.


This band is so good and so much fun that they really need to be in a much larger space to be fully appreciated. I could see them powering the El Ray with a thousand people rocking out on the floor and heads bobbing in the balcony. Also, the loss of the stage lights during the show left them in a kind of deep red dark. While it had no effect on the great sound, it did diminish the impact of Cold Blood Club's carefully assembled dance club atmosphere. They are just as much fun in the dark, but these are people are best seen as well as heard.

I hope we both see and hear a lot more of them in LA and in a big dance venue. If not, they are worth a trip to New York City. 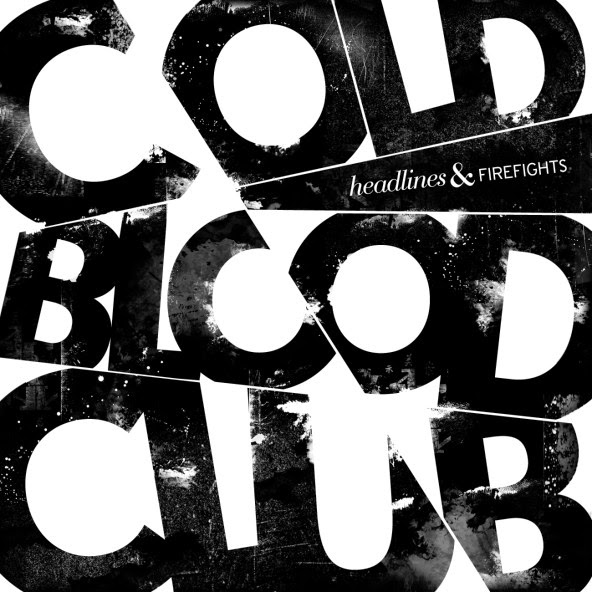