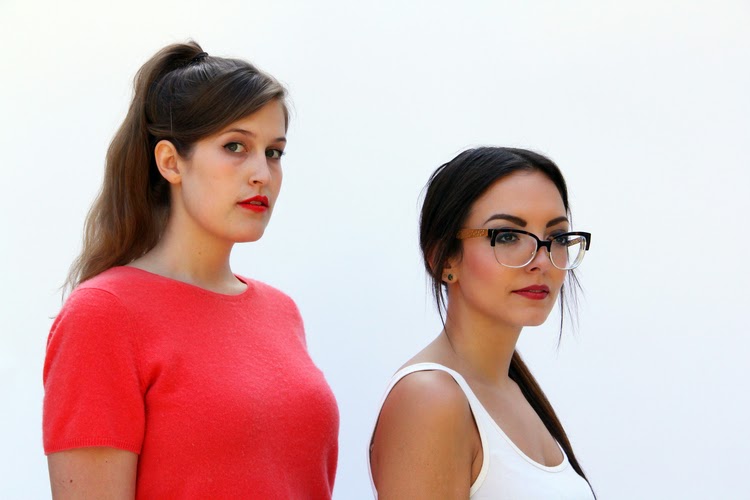 Release: Take two talented California women in a summer program at Cambridge university, add guitars, mandolins, dulcimers, banjos and laughter and you get Steps of Doe, also known as Keena Batti and Molly Falck. Harking back to the high point of American folk rock in the 60’s, Steps of Doe deliver a magic music with lush harmonies, rock guitar riffs and electronic sophistication so good, you can’t tell it’s there.. Sometimes they sound medieval with fast-picked dulcimer and mandolin strings that paint images of castles and unicorns. Sometimes they bring in some funk and rock rhythms and distortion unicorns have never heard. Their debut album, “On Returning” pulls all that together into an achievement that will catapult them into the first ranks of folk and rock.

The 8-songs on On Returning  often sound as if they started in 12th century England and ended up on stage at the Roxy in Los Angeles last week. Each song has deep harmonies sung in a perfect fifth deftly embroidered with  modern rhythms, guitar riffs, pop hooks and minor keys to creating rainbow landscapes that are powerfully cold and lonely. It is remarkable how these two women can unite their voices and arrange their music to make you feel like crying and dancing at the same time.

But the luxuriance of the album can’t hide the fact that it is an at heart a journey through a cold, landscape strewn with frozen rainbows. It begins a trudging-tempo dirge, ‘Love So Fine”, that curls up like ember smoke from strings and drums to chronicle the loss of a love to the sea. Steps sing I had a love so fine/Lost to the tide and carry you away into an icy sky with a keening ooh..ooh…ooh…ooh. You are in Arthurian England in the winter of great discontent. The discontent grows as they take you by the ears with the rock beat-driven “Under the Shadow of the King” which sounds like a tragic song of love and sex but is actually a dig at the male-run world of the music industry: Your conquest ended fast/With a scepter made of brass/My nerves of fragile glass is sung not in fear but in defiance. Harpsichord and mandolin accents drive the point home – we are better than you can understand. 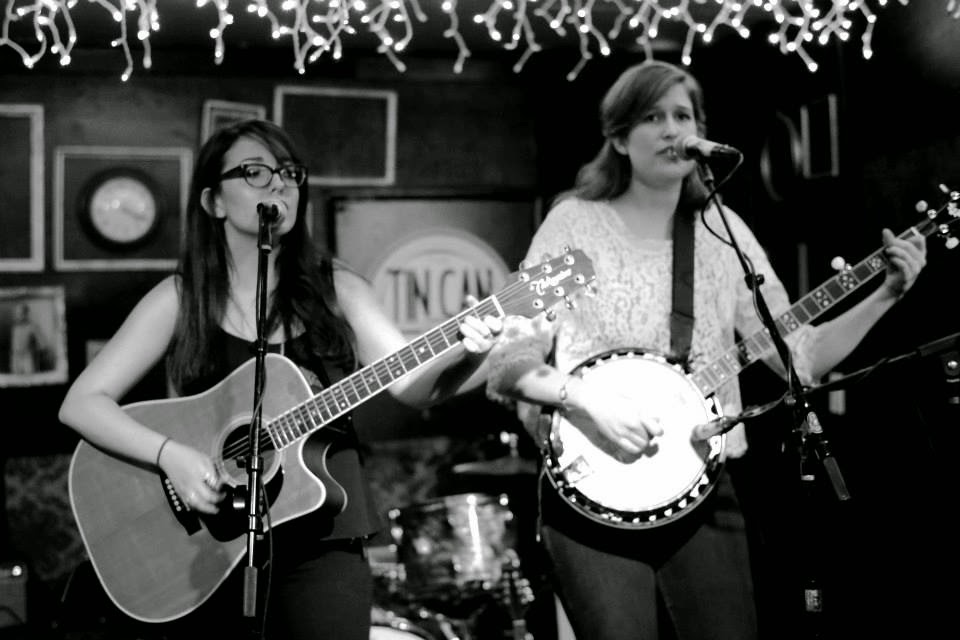 Although Molly and Keena are just launching their career, they show not only the attitude of experience expressed in “Under the Shadow of the King”, but a strength in arrangement and imagery that belies their youth. “Cold Houses” displays that in spades. After an orchestral introduction opening for the first verse, they echo their voices back as if in a cathedral. The effect is to  transmit a sense of grandeur mixed with desperation. The words hang, pregnant, taking the time to wait for a downbeat that flings open the doors to their full power. A deep kick drum  retains the cathedral feel with  a hypnotic pulse while flirting, flowing guitar chords swoop through the nave, leaving urgent colors in their wake. But no matter what the drum or the guitars or the strings are telling us, the two women’s unstoppable harmony cuts through  like crying souls in purgatory:

Daylight warning upon the brittle pains/A rosy slant fades to gray/I’ve been waiting, planning my escape/Will the snow ever melt into rain?. You don’t know if you should cry or sway and spin - so you sweat.

But Steps of Doe are not all medieval England and ethereal magic; folk and country poke their way through the mists at times, as in “My Sweet Sedona” with western twang, banjo strums and a violin that is more a fiddle. The song laments a loss, as does every song on this album in one way or another, but not of a person as much as of a time and place – a sadness, not a tragedy: Just a year ago….I wish we could’ve stayed. The women continue the theme of memories and lost times past in the next song, “Chasing Ghosts”, but they kick up the tempo with a quick step snare-bass. The ghosts are people from the past, but since this is Steps of Doe, they are familiar, even comforting, not frightening at all and the chasing goes both ways.

“Walker” enters with a simple walking click beat under a quick finger mandolin strum, preparing the way for Steps’ harmony that rises, pulling the entire song up in intensity and closeness to rock and pop. The guitar-led tempo moves to the foreground while Molly and Keena’s harmonies shift into backup mode, creating a tapestry that enables you to ponder the crumbling ruins and the stumbling love told in the lyrics. “Walker” blends easily into “Down the Road”, a lament on the loneliness of a summer love, driven by a restrained power drum beat that won’t let you look away as you hear the lyrics,  I’ll tell you that love can get lonely/If one side of your bed is so cold….You’ve given your love to the road.

But even Steps of Doe can’t always pine for times and loves past.  In person, they laugh and giggle at themselves, at boys and at the loneliness that seems to pervade their music. This is fun, they say, we love singing together and write these songs. That feeling of musical joy, if not lyrical joy, surfaces in what I think is the iconic song on the album, the final song, “Bring Me Home”. Propelled by a banjo,  drum kit, and full-blown rock guitars, Keena and Molly let loose with a stadium-ready  rock anthem that takes full advantage of the nuclear power side of their voices.  This is the song that makes you dance and cry at the same time, that punches you in the stomach and moves your legs. The lyrics sing of  a crisis of a time – Time is drifting through my veins/Maybe I am lost again….Oh..Ooh..oh bring me home – but the beat and the riffs carry you away in a dizzy trance. Crying and dancing: this is the magic of Steps of Doe. 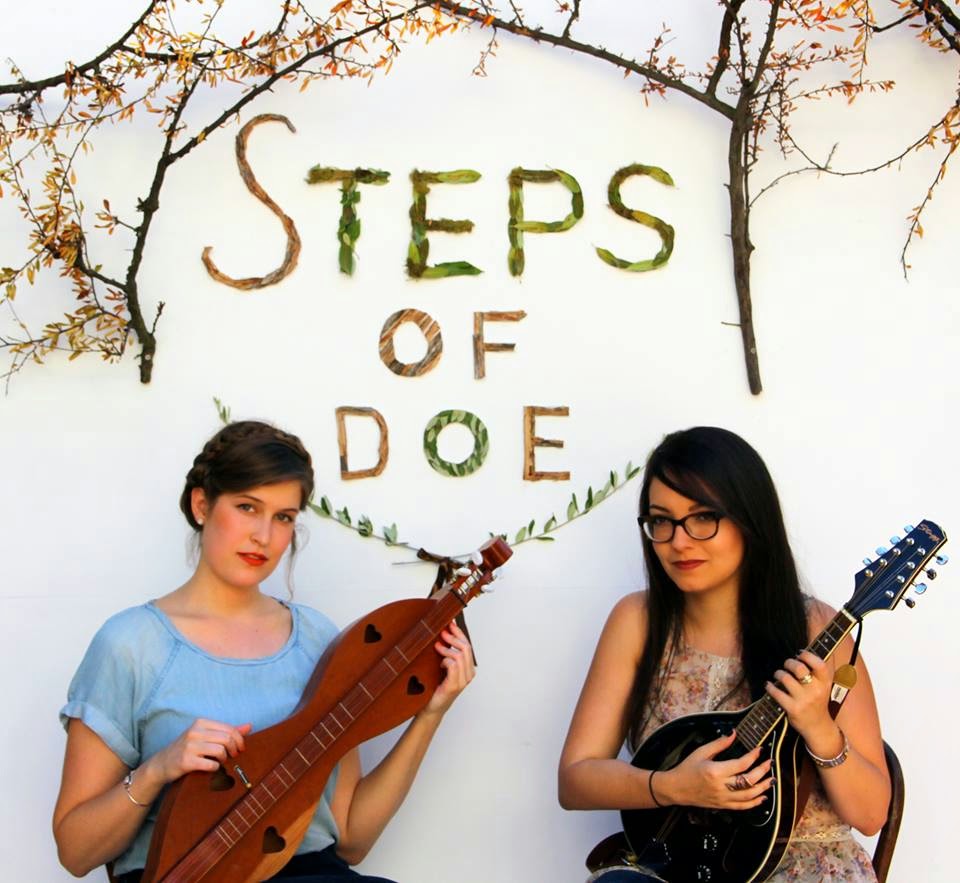