Release: To say that BLACK VINCENT is simply a solo vehicle for songwriter and vocalist Coley Kennedy (Welcome to Ashley, The Buddies) is akin to stating that the Vincent Black Lightning is just a motorcycle.

Teardrop Deluxe is an album that features contributions from Kennedy’s Welcome to Ashley band mates (Pete Javier on guitars and Jeremy Barrett on bass; both played in The Buddies), who worked alongside producer/engineer/vocalist/multi-instrumentalist Justin Collins (Justin & The Cosmics, The Buddies) and co-producer/engineer/drummer/keyboardist Adam Landry. Scott & Kim Collins of The Smoking Flowers and The Buddies pitched in on additional guitars, vocals, and percussion.

“I've always wanted to make a ‘rainy-night’ album that's sad without being depressing,” states Kennedy. “I have always had an affinity for balladeers such as Johnnie Ray, Roy Orbison, and Frank Sinatra, as well as late-model crooners like Chris Isaak and Richard Hawley.” Teardrop Deluxe is a blend of the aforementioned artists with subtle nods to glam rock and post-punk (The Jesus and Mary Chain, Psychedelic Furs, T-Rex, and The Smiths).

Teardrop Deluxe, which was recorded at Playground Sound in Nashville and offers up nine simple songs of self-reflective lyrical statements about love, loss and lamentation, is a proper introduction to BLACK VINCENT: dramatic, atmospheric rock for the discriminating music fan. 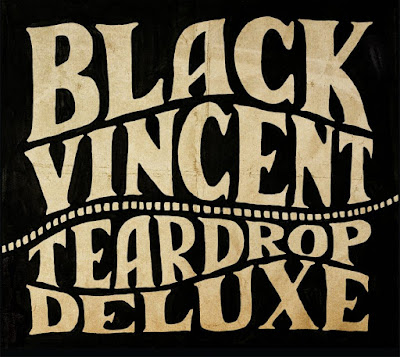