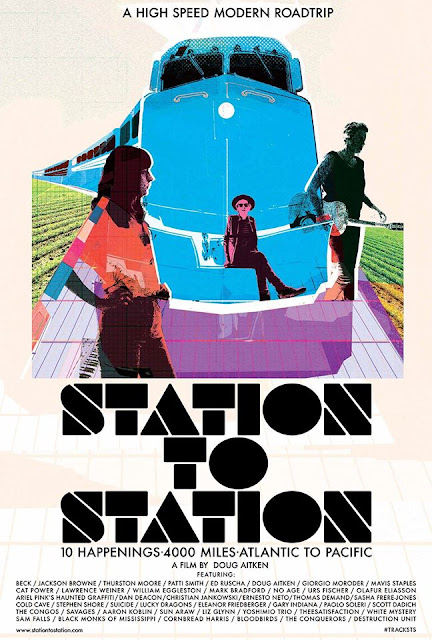 Station to Station: a 4000-mile enchanted journey into our past and our future.

Review: This week’s New York Times Magazine features a cover story on the shift of art to the digital future as millennials trade in CD’s and records for downloads, YouTube videos for television and Garage Band for the recording studio.  Venice-based artist and film and performance director Doug Aiken is no stranger to the latest technologies and online communities of creation, but he chose a distinctly 19th century platform, a passenger train, for his stunning new film, Station to Station, now playing at the NuArt, in Santa Monica California and hopefully, soon nationwide.

Actually, Station to Station is much more than a film – it is a living project that uses a 23-day train trip across the US to explore modern creativity, both on the train by an ever-changing group of visual and musical artists, and in “happenings” at stops along the way ranging from big cities to tiny hamlets.  On board the train were famed musicians like Jackson Brown, Patti Smith, Beck, and local artists and bands who jumped on and off at various stops, making for a constantly revolving creative community working together over a 4000 mile-long canvas. The train itself was a work of art - a 60’s era Milwaukee Road Bud Railcar passenger train with a Vistadome sunroof coach and a rare torpedo-end Hiawatha observation lounge car. Each car was equipped on its side with high-speed programmable moving digital lights.  The effect was a fast-moving kinetic light sculpture of streaming under lit railcar windows as they raced through the night. 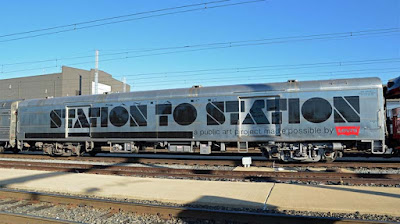 As stunning as the train was, the 62 one-minute films produced by Aiken and the artists onboard and at the happening stops are the heart of the film.  The revolving, flowing community joined and took part in 10 events in major cities and off the grid locations including a musical march through a train station led by a bull-whip cracker, a colored fabric fence by artist Sam Falls in Barstow, Fritz Haeg's artwork  paired with a performance by The BodyCartography Project in Minneapolis/St Paul, Ernest Neto’s  nomadic light sculpture in Los Angeles, and Jehnny Beh performing with Savages in Oakland. On board, the train were concerts, interviews, Olafur Eliasson's drawing machine, and miles of wanderlust-evoking scenery.  There was even an interview and tour with Paolo Soleri at the Arcosanti complex in Arizona.

In assembling the film, Aikens avoids the trap of creating  a mind-numbing series of one cool (and sometimes obscure) video after another. Instead he interweaves the videos with interviews, film of the train shot from outside and inside - including through the sci-fi like observation car windows at the end of the train – and film from each of the happenings  Although each video is statement in itself, editor Austin Meredith flowed some into others, giving Station to Station a visual storyline that holds attention beyond the eye candy on the screen. This gives the film substance, which he extended into a 30 day-long dynamic art and music installation in London’s Barbican and an illustrated book.  The overall product – film, art installation and book – is a comment on art through the eyes of art, a meditation on the transience of travel as trains pass each other at speed, combined with the intimacy of occupying the same  physical and artistic space for an extended period. But mostly, the film is just about enjoying the ride.

Station to Station is unique – a kind of Burning Man on rails, a  hopeful work of art with an intimacy that could only emerge when people live, work and learn each other over three weeks on a train. Station to Station is an enchanted journey into our past when rail was king, and into the our future where creativity is queen, and in the end,  into our lives where it really is the journey and not the destination that is important.  Take a ride and get lost in both.