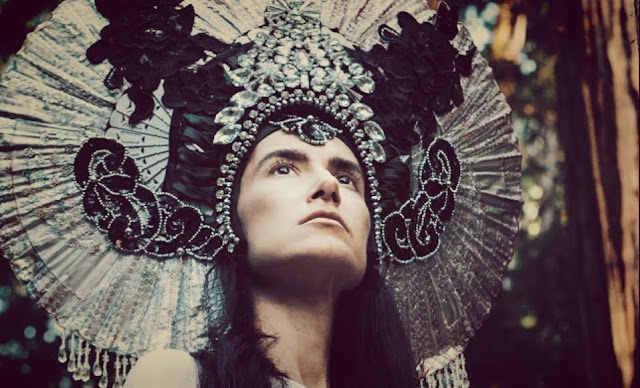 A conversation with Simrit, the World Music rebel known around the world.

(Los Angeles) Simrit is a musician, a producer, and CEO of her own music label who is also a student, practitioner and a certified teacher of Kundalini Yoga and Naad Yoga.  She records, composes, produces music and tours with her band giving concerts and workshops across the globe. Simrit is known for revolutionary innovation in hypnotic World and Chant Music and she has topped World Music Charts, including Billboard and iTunes at #1. We caught up with her for a quick conversation before her concert in Venice, CA.

R360. What is Naad yoga, what does it have to do with music and what do we know about the healing power of  music and of the human voice?

Simrit. Great question.  We all know that music has immense healing benefits- there are studies being done of how music can stimulate the hypothalamus to command the endocrine system o release certain hormones. That is what Naad is about- it's the tip of the tongue and the navel and the intention of the singer;  it strengthens each of them. Naad uses the voice --  which doesn’t have to be singing -- to get those specific results of releasing hormones. 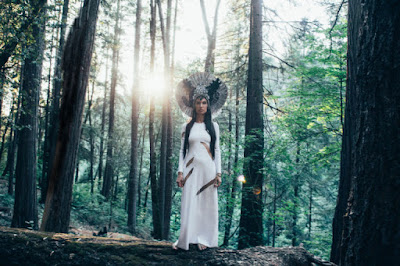 R360. You have produced 5 albums since 2013 and appeared on two other albums and the music is complex, layered and beautiful and often combines both modern and old instruments. In the song Prithvi Hai you use a variety of instruments in that song and in your band in general. You use your voice, the kora, cello, tabla, a drum kit – others?

Simrit. Yes, the guitar in there, of course.  We tour with the kora, the cello and the bass and a drum kit.  What you hear on this new album is the same as what you hear live.

R360. Do you play all those instruments or write for all of them?

Simrit. I don’t play them all myself, although I do play a little bit of guitar.  When we are live, I am usually not playing or I am playing the harmonium – a kind of pump organ. My bandmates are playing. Shannon Hayden is playing cello, or an electric cello when we are on tour – she is amazing Yale-trained musician who graduated at 18 or 19 with an MA in cello. On the album, she is playing a vintage cello from the early 1800’s. I do play some percussion and I am a trained in classical piano. 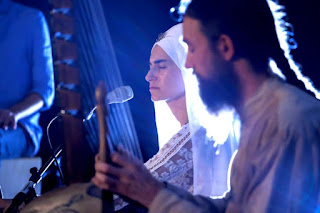 R360. Your producer, Paul Mahern, has produced for Iggy Pop, John Mellencamp, Willie Nelson – not the music I associate with yoga. He is also known as an ardent yoga practitioner. did you two meet through yoga?

Simrit. Yes. Both of us are serious Kundalini yoga practitioners – the yoga that is about the energy at the base of the spine that rises in the body. When the tip of the tongue touches areas of the palette – like in singing – it stimulates that energy. He and I got together through this yoga.

R360. How has his production technique and style affected your music?

Simrit. We are like brother and sister and we answer each other’s sentences musically.  I have never had this kind of synergy with a producer before – and we had it as soon as we met. When we got into the studio it was easy , no stress, slick and easy, that is how we work together.  And each album was easier than the last. And he has worked with Neil Young and Mellencamp and others in rock and folk yet our styles are so complimentary. We are both edgy and we love beautiful music that provokes thought .We plan on doing the next album together. 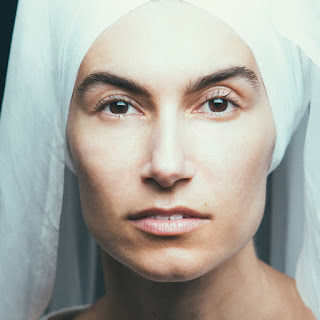 R360. The song Clandestine on your new album is a very complex, layered piece of music with a very interesting riff that overlays the snare beat – I am not sure if it percussive or a stringed instrument, but it is addictive and it scaffolds your voice perfectly. What is that?

Simrit. That is the kora; a 21-string gourd instrument and we have adapted it for this song.

R360. You were born in Greece and attribute your music to your Greek genes, but you were raised in South Carolina. How does that affect your music?

Simrit. I was an orphan from the time I was born until my parents adopted me and later my brother – we are not related by blood. We were brought to the American South, but my parents were Greek and raised us in a strong Greek culture at home. We were fortunate to have that. Being an orphan, fending for myself, being raised in a playpen, made me question things, especially when my  parents told me about my being adopted. That pulled me deep into myself and that has a lot to do with the depth of my music.

R360.  Your song Pravan Guru  has a hook in it – not the kind of hook we think of in pop, but definitely, a riff that grabs you and makes you want to sing it.  Is there a similarity between a hook and a mantra and do you use mantras in your music?

Simrit. Mantra just means “projection of the mind”. You can put a hook in a mantra, like a hooky melody or a rhythm, but a mantra is usually repeated. There is not necessarily a relationship, but they both hook you in. They do it differently, but a mantra hooks you in a level greater than your mind and it tunes you to a certain frequency.

R360. Thank you. I know you are setting up for your concert tonight at Full Circle. Thank you for taking the time to talk with me.