The title song, “American Novio” kicks off the album with foot-tapping hooky Mexican beats accented by horns laying the foundation for Sanchez’s twinkling voice telling the story of interracial romance. While the tale is sung in Spanish, the wink-wink in her voice and the addictive percussion make this a playlist favorite in any language.

“Puerta del Sol” shifts the mood dramatically, with Sanchez digging deep into her urgent jazz voice and her Latin psyche to spin out the forces driving her to return to her inner Latina.  The mood shifts even deeper in “Domingo Siete” as it takes us through the fear and anguish suffered by all too many young girls impregnated by a boyfriend” - a serious problem for Latinas who get pregnant at twice the national average - and the shame of telling their mothers.

The optimism and joy continues in my favorite song on the album, “Eh Ah”, which celebrates not only her mother’s citizenship papers but in an ironic and funny way, a happy, sunny day in her life – the kind of day we all cherish regardless of our language or origins. In these days of anti-immigrant hate and fear of foreigners, a song like “Eh Ah” brings home the truth that families from Mexico or anywhere else bring joy and love and song and richness to American culture. When I dance to “Eh Ah” I know one of the reasons I love Southern California is that it used to be Mexico.

That love is reinforced by “Y Ándale”,  a traditional Mexican ranchera slow dance written by Minerva Elizondo, known to Americans through her appearance on Linda Ronstadt’s album Canciones de Mi Padre. Sanchez teams up with Fernanda Ulibarri, leader of the American Latino Music rock band Uli and the Mexican Standoff to deliver traditional harmonies.
Just as you feel comfortable with the album’s old-style Mexican music Sanchez hits you with “Seven”, a fast-singing, fast moving, practically vibrating electronic  pop song that breaks into mariachi in the middle – with her father Geraldo Sanchéz  on the guitarrón. “Seven” is the kind of pure fun that only Sanchez could pull off, combining cultures, languages, music forms and fun.


She moves on to the English language “Ocean”, sung with Marisa Ronstadt and produced by Joaquin Pacheco, shifting to a pop form and her jazz-rock voice. The album wraps with another Pacheco-produced song, the addictive bossa nova  “Alas” (“Wings”),that gives Sanchez free reign with her full-on sensual jazz  delivery worthy of a Playboy Jazz Festival, only in Spanish. 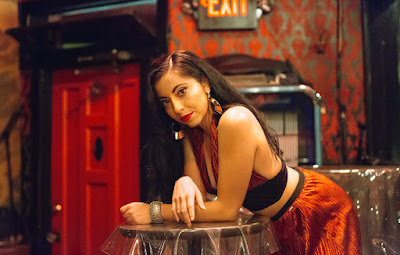 Nancy Sanchez  is a diminutive powerhouse  with a reputation as a superb jazz singer, but her live concerts mix pop and jazz and Latin music and other genres plus humor into not-to-be-missed performances.  She cites Joni Mitchell, Regina Spektor, Feist, Paul Simon and Billy Joel among her influences and inspirations –why she can cover so much territory so well.   In American Novio she joins a growing community of Latino singer/songwriters and producers who are showing a wide and not necessarily Spanish-speaking audience the emotion, the energy and just plain fun of music from our southern border.  American Novio is an album that is a joy to listen to, a joy to dance to and a milestone in the career of one of America’s most creative and talented singer-songwriters in any genre and any language.