Both dance pavilions at the California Plaza were elbow to elbow with writhing crowds that spilled over into the VIP seats and the picnic areas, rocking out to music that just wouldn’t let you stay seated. The hugely popular and resolutely community oriented Buyepongo was exactly in their element at the free Grand Performances concert series,  which has been called “a grand gift to the public.” by the Los Angeles Times. Those were their people dancing – Latinos, Asians, blacks, gringos -- the spicy rainbow mash-up that exults in the dynamic culture jumble of Los Angeles.

Buyepongo has played major venues and motivated crowds on both coasts and around the world, sharing stages with bands like Quantic in the UK, Ondatropica in Colombia, Ozomatli, Booker T and Cut Chemist and Sharon Jones in the US, Celso Piña in Mexico, and many others. But all the world tours were forgotten Friday night; Buyepongo was home. And they were at full strength – 8 guys, 4 drums, an accordion, guitars, and horns. Band leader Edgar Modesto was front and center with his signature drumsticks on a single conga, bantering and singing in Spanish and English.  And they let loose like I have never seen them before, mixing up beats, stretching songs until dancers were ready to drop, and laughing along with the audience. 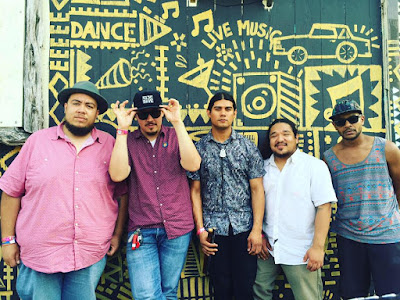 The band started off while the late summer evening sun was still up and really ramped up the energy as the sun drifted down and the stars came out. By halfway through the set, the sky was black, the building surrounding the Plaza were alight with projections, the stage blazed across the water with lights. Grand Performances had become a huge outdoor dance floor presided over by Modesto and his magical assistance.

Buyepongo is part of the leading edge of fusion music barreling out of LA, fed by indigenous rock that goes back to Richie Valens (aka Richie Valenzuela) and the Doors in the 60’s to the constant stream of artists flowing daily through LA from Latin America, Asia, Europe, and music centers in the US like New York and Nashville. The band’s latest album title says it all- Todo  Mundo “Everyone”.  Not only is their music fun for everyone, they play for everyone, from free public events like Grand Performances and concerts at the Levitt Pavilion in DTLA to salsa clubs and neighborhood dance clubs like La Cita and the Del Monte Speakeasy to highbrow centers like the LA Museum of Natural History and the Philadelphia Museum of Art. Bilingual fusion music –ALM (American Latino Music) -- appeals to everyone regardless of language, race, country or location. It brings people together and that is what Buyepongo does best.

And that is what Grand Performances does best – creates a magic that enables artists from all genres to bring people together. The gift GP gives to the people of Los Angeles and the State, free of charge, is a safe, exciting place where magicians like Modesto and Buyepongo can transport crowds to an experiential somewhere else. To do this they have been presenting the best in music, dance, and theater at the California Plaza in the heart of Downtown for 30 years. Grand Performances is one of the positive forces that inspires community among the diverse peoples of Los Angeles and reflects the many cultural interests across the region. This why Buyepongo was at home.

And it why Sidestepper was also at home at Grand Performances. Having transformed the Colombian music scene and inspired a new generation of young electro-beat geniuses to marry Latino music with cutting edge beats, Sidestepper is now bringing its unique brand of rhythmic joy to the US before heading back to Bogotá.  Eka and her band of musical pioneers are the latest evolution of a project organized three decades ago by producer Richard Blair to mix the hard and heavy emerging London drum and bass sound with Latin sounds and breaks. Today, Blair’s project has become a new genre, melding traditional Caribbean beats to modern sounds and music forms.  All that was on display as  Eka danced and skipped across the GP stage, whirling, rocking and clapping, moving the already energized crowd in California Plaza in a non-stop Bailando that brought the characteristically diverse LA crowd of singles, couples, and children together into a single living, dancing creature. Points to the organizers at GP for combining two bands to create a singular experience.

That singular experience will continue to October with programs ranging from classical and funky jazz performances of Peter and the Wolf to a beer tasting party to modern dance without boundaries featuring Milka Djordjevich, d. Sabela Grimes, Amy O'Neal and Micaela Taylor to films and theater.