The Next Big Thing! 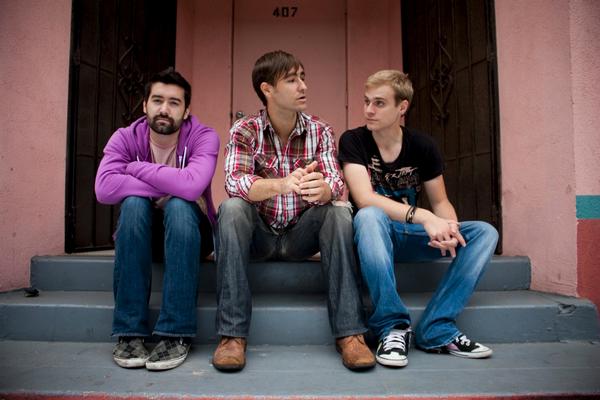 Stonefeather is an infectious trio that combines Funk,Indie & Rock, making waves as a HIP new band from the West Coast. These young lads originating from Austin, Buffalo and California, have emerged as The Next Big Thing! With their funky bass lines and guitar riffs, along with vocalist Ian Thomas as their front man, Stonefeather are proving to be the shakers on the dance floor at music venues around the country. With their recent release of the new album titled " Revolution"... funny huh?

Revolution spoke directly with lead vocalist Ian Thomas on what's next for these lads, talk about hot pink undies and their latest video that is launched this month on you tube.

R. You've come a long way since your days growing up in Austin Texas, now living in LA, what are you working on next?
IT. I feel at home here between the mountains and the ocean, so I think I'll be in LA for while. Stonefeather is pretty much my entire existence. So, for the foreseeable future I'll be living in SoCal, working on the Revolution album. A west coast tour is in the works as well. I'm really excited to get to Portland and Seattle.

R. You guys are infamous for breaking out a sweat on stage and being the shakers on the dance floor. Does having Zach Kibbee on bass wearing hot pink undies add to such a groove?
IT. Definitely. A big part of our mission is to make people move. We want to help people break out of their shell. And how can you be worried about how YOU look when there's a dude in pink undies flailing around stage.

R. Austin, Texas is known as a HUB for having the best musicians in the country, what led you lads to move to LA?
IT. As much as I love Austin and as great the music scene is there, I had to get out. I think people limit their growth potential when they stay in their hometown. Dave left Buffalo, New York to attend Musician's Institute in Hollywood and joined Stonefeather his first semester there. Zach is from Newhall, California.

R. The three of you share an apartment together, god only knows what goes on...but when you're not writing your own music, what are you listening to at home?
IT. We all love the Red Hot Chilli Peppers. Dave and I listen to hip hop all the time. Zach loves classic rock, folk and is a big Radiohead fan.


R. The three of you have been castaway on a remote island, you survive, and with you is Pamela Anderson and Saddam Hussein. You have only a guitar, and a bikini. What happens on the first night?
IT. We use the  bikini as fuel for the fire and play songs to get Saddam and Pam in the mood and see what their kids look like.
Email Post