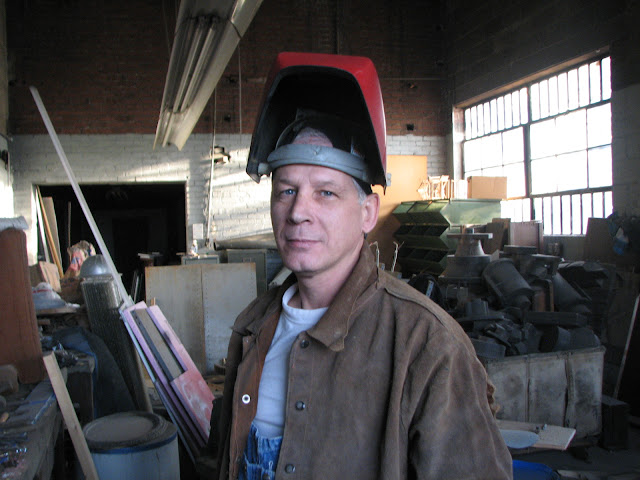 David J. Calfo is a native Pittsburgh salvage artist. Born and raised between the glow of the  Hazelwood and Homestead steelworks, David is the Fourth generation of a steel family. David credits the city itself for his education, inspiration and philosophy on life. They say it takes a village to raise a child, but in this case, it was a city like Pittsburgh. David remembers his neighborhood as an oasis of talent, filled with still mill workers, welders, carpenters, professors from nearby universities, and other assorted hard-working "burghers". The close-knit neighborhood was such that he could wander around, check out his neighbor's projects, and often get a first hand lesson on how to build a deck, pull a transmission, cut down a tree, or whatever else needed to be done. David spent the next 25 years as a carpenter, restoring the neighborhoods where he lived, learned and loved. Utilizing the skills he gleaned from his childhood they crumbled away. Realizing the inevitability of Pittsburgh's transition and change, David started collecting local artifacts from the steel mill before they were lost forever.

David opened Blue Collar Gallery in Lawrenceville in 2004. Looking back, David says that he never noticed how much old school values and practices influenced his life he started his art; " I spent my life working with my hands and mind in the city that's my home-not unlike the older neighbors I grew up under." While he works to preserve Pittsburgh's past with new creations, David notes that Pittsburgh has always been a melting pot. Today we're moving fast with a lot of new people, and through our labor, all of the United States.

Revolution spoke with David directly about salvaging his environment and get scoop on his latest work.

R. What is the fascination behind restoring salvage articles and turning them into art?
DC. I like knowing that it's not going into a landfill. For me, it's a way to honor the past, most of my salvage art can tell a story about a place and time. 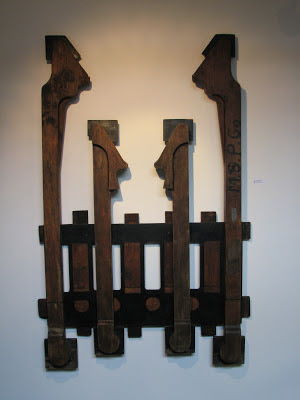 R. Your quite a creature of habit, is there anything artistically you would like to try, other than working with salvaged artifacts?
DC. Actually, I'm a lot more flexible than you think-I work with what appeals to me at the moment or to fulfill a specific need. Salvage art is a strong draw for me, but I also do paint on canvas, resin work, woodcarving, airbrush (sometimes several of those is one piece), photography and I've helped create statues. Some of the building restoration work I do is a work of art in itself.

R. Due to its industry, Pittsburgh has stuck with a stigma that it's purely a blue collar city, How much art including your own has changed culturally for the city?
DC. I think that comes from people who don't know us or haven't been here. We haven't been "Hell with the lid taken off" for a long time. There are more opportunities now for people to be artist in Pittsburgh and to show their work, and we're seeing a lot new artists move here. Where I live in Lawrenceville is becoming more of an artists community, but it's doing it along side of the (Steel) blue collar residents. I don't see "blue collar" as a stigma though-it's the hard work, blood & sweat way of life of our (my) ancestors and I'm trying to honor their legacy by giving new life to objects from their history. I'm not trying to change the city, I want people to always remember where we came form. 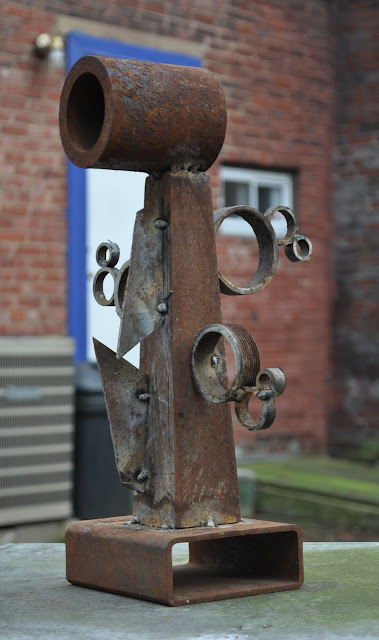 R. Where do you find your pieces?
DC. Everywhere. My photographs are usually taken at old mills, warehouse and train tracks. For my salvage work, i may find material at those old mills, in dumpsters and on sidewalks. I've also found a lot of salvage material down by the river (it's a great place to find metal). people are also beginning to provide me with material because they're seen some of my other work at a gallery.


R. When you're not salvaging old pieces, what music do you listen too in your studio to inspire you?
DC. When I'm in the studio or shop, I don't listen to music, I focus on the piece I'm working on. If I'm out looking for material, I like to listen to Michael Franti because he talks about real life.

R. What are you working on next?
DC. My next commissioned piece is a set of growler handles for tupelo Honey Tea's hand-thrown growlers. They'll be made of recycled materials. After that I'd like to focus on a piece for a museum.

R. You have been commissioned to design an art piece for the white house, what material will you choose and what can future generations expect to see from you're artistic legacy?
DC. Material-wise, I'd go on a hunt around the USA for found objects, but I can't tell you what it would be until I see what I find. Hopefully by creating this piece I'd be able to convey some idea of what life is like now and show them what I see.