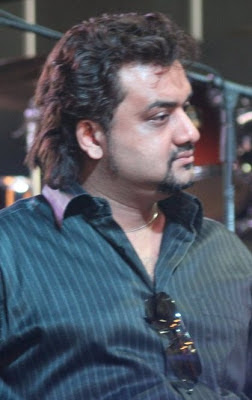 Siva "Zaphod" Chandran has been in the Asian music industry for more than 20 years. He started first as a prominent music critic for international music mega stores such as HMV and Tower Records and for several national dailies and magazines in Southeast Asia.

His unflinching passion for music grew over the years and after several run-ins with struggling indie musicians, he decided to launch AVIMA (Asia's Voice Independent Music Awards). The awards which was launched in 2009 is now considered the world's biggest indie music awards challenge as it featured submissions of over 3000 musicians from 25 countries.

Besides music, Siva has taken an active role to reach out to underprivileged children and victims of natural disasters. He founded the Awakening Project in 2010 which brought award winning musicians to help bring classes to orphanages.

Siva and his partner, Meera, are currently the co-founders of Saintz & Sinnerz, a global Brand and Marketing company that aims to bring musicians from all across the world under one platform to co-create a showcase of lifestyle and entertainment. One of their music brands, Bite My Music will take over AVIMA awards, and will now include India's 1st Independent Music awards and the 1st Africa-Asia Music awards to go along with Asia Independent Music awards.

REVOLUTION spoke directly with Siva from his home in Malaysia to get all the latest scoop on music in Asia and afar...

R. The US music market is a tough one to break, How different is the music industry in ASIA compared to that of , here in the US and Europe?
SC. It's definitely much easier to make a mark on the Asian music scene but it boils down to clever marketing. Its all about the buzz and how one sashays with new media. The independent music scene is really thriving, and these days even the top advertisers and corporations are engaging independent musicians to endorse their brands because they see the indie as more hip and connected to the young urban, affluent crowd. The indie scene is willing to work harder to survive, with more and more creative juices and ideas squeezed out to supercharge their careers.

R. In 2009 you launched Asia's first independent music awards AVIMA (Asia Voice Independent Music Awards), tell us about this development?
SC. Honestly, I never dreamt we would have pulled it off, but it was staggering to receive more than 3000 musicians submitting for awards from more than 20 countries. It propelled many independent acts on the global map and was a beacon of light for thousands of others as they all saw it as the one platform to finally gain some recognition. The unique thing about our awards is that it doesn't matter who you are or where you come from or what language you sing in-it was all about the talent and in typical "David vs Goliath" scenario we even had many unknown and bedroom acts being nominated to go head on with top notch ones. I'm glad to say we have had some stunning upsets. This year we have decided to change the title of the music awards to Bite My Music Awards. It's a global music awards brand under our company Saintz & Sinnerz and Bite Media, and besides the Asian Indie Music Awards, will also be include sub-awards-India's 1st Independent Music awards as well as 1st African-Asian music awards.

R. The world has witnessed some natural disasters particularly, in the Asian region. In 2010 you set up "Awakening Project," bringing award winning musicians to help bring music and give classes to orphanage children, share with us this journey?
SC. Having met Sir Bob Geldof and been inspired by BandAid/Live Aid, it was always something I had wanted to do for Asia. But we never really had the financial resources or muscle to pull it off over the years. However, when an electronica indie musician from Philippines, Erick Fabian aka Cerumentric approached us to help him with a digital music album to raise funds for flood victims in his country, we decided to do something about it. This led to a concept we created called "The Awakening". The idea was to bring celebrities to underprivileged children. In India, Sanjeev Thomas (main guitarist for Oscar/Grammy winning AR Rahman) launched it and this year, we launched "Indie Aid Japan" under The Awakening Project, bringing together musicians from all over Asia who performed in Malaysia on May 5th, to raise funds for the victims of Japan and also School Aid Japan. Indie Aid Japan has also been released as a 28 track digital download album in which proceeds go to Red Cross Japan.

R. Away from all the noise and challengers of work. When at home what current artist/band are you listening too on your iPod?
SC. I'm often very occupied with the latest songs and videos sent to me by many musicians from all over the world, wanting an opinion on their songs even before its released. Its so freaky that musicians actually take my views very seriously and have even amended their tracks and videos based on my feedback. There's this crank anthem called "Give em the Ugghh" by a Malaysian hip-hop act K-Town Clan that has really got my adrenaline pumpin and any song by Adele is like a supernova latte for me. I also thought the song and video, Save The World by Swedish House Mafia was pretty nifty.


R. As you look back for just a moment and reflect on your life career, what is the one thing you would say, has been the highlight?
SC. There have been many highlights, but I think the defining moment of my life was when lil' daughter looked at me and said "Daddy..please stop". The reason why those words were so powerful was because i had spent more than a year with less than 4 hours sleep every night trying my best to help elevate the independent music scene of Asia, and I had crashed twice, ending up in a hospital. So, in  mid 2010, I let go of everything in my life and retired from the music scene. Amazingly, magic began happening in my life, and the right people and resources began flowing in. I stepped back into my own picture frame, dusted off what I didn't need and am now geared even more to accomplishing what I set out to do. This time finding inner peace and spending more time with loved ones takes center stage.

R. You receive a golden ticket to Willy Wonka's Chocolate Factory. You arrive and the infamous orange-skinned, green haired Oompa-Loompas greet you and invite you in. Whilst inside you have secretly been told you are here to create a new chocolate recipe for the world. What will it taste like?
SC. Its gonna be a gastronomic rainbow of all caramel strawberry-honey in a burst of psychedelic colors as if a newer version was tossed into Kanye West's head and grindered through David Guetta's love machine :)