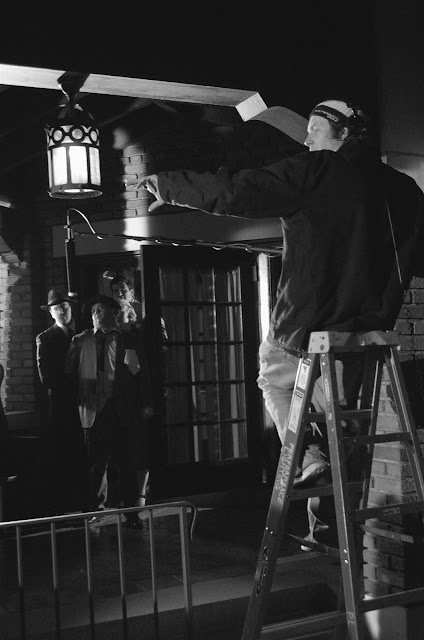 Jerry Walterick is an award winning sound designer, re-recording mixer, musician and filmmaker who has worked on a number of feature films, documentary and television projects. His work has been broadcast on Starz Network, BET, MTV, NET-Flicks, CAT, the Food Network, Animal Planet and around the world at film festivals. His credits include Staunton Hill, the Screening, Two Minutes Later, Year Zero, What Happened to Hip Hop, the World Wildlife Fund, Verizon, NFL Networks, ESPN, Atlantic Records, Iron Mountain Film and Sound, Travelers Insurance, Eukanuba, the Dallas Morning News and others.

Jerry was drawn to film as an art form at a early age. There was something magical about the moving image and sound that had the power to captivate, challenge and expand consciousness and emotion. He has always had a driving passion for documentary work. The social issues and exceptional stories of people and history offer a unique glimpse into the past and present, while providing a narrative framework with which to educate, entertain or simply explore.

Jerry wears many hats on a film production, often working behind the camera, doing location sound mixing and editing in the post-production room. He is currently involved in the feature documentary Code 2600, a full length film about evolution of computer hacking and the future of privacy in the online world. Additionally he's working to produce and shoot a documentary on UFO encounters and the Flatwoods, WV sightings of 1952.

REVOLUTION had the pleasure of catching up with Jerry from his busy schedule to talk about the in and outs of working on film production.

R. What made you get into Sound Design and tell us exactly what is it?
JW. Sound design is essentially any sound you hear in a movie that isn't dialog or music. Backgrounds, ambience, footsteps and foley, creature sounds, space-ships, car engines, machines, etc. It encompasses a pretty broad range. I had always been fascinated with sounds in the movies from an early age. I guess seeing Star Wars for the first time as a kid and feeling like I was being transported into another world, the light sabers, imperial speeder bikes and all of the creature sounds. Sure, the visual effects are amazing but when the volume is turned up, that's when you really begin to feel like everything is real. At least for me.

R. You, ve worked on some impressive film productions, what haven't you done?
JW. Well, I've caught some lucky breaks, worked the long hours and always given my best. Most of the stuff I've worked on has been independent film and documentaries with private budgets, lots of special effects,gore, low budget horror stuff. It's fun because every project is different and the limitations actually force you into making some creative decisions that in long-run make for better art and something unique. There aren't any limitations to what you can and cannot do in the Indy world.  Anything goes and the weirder the better in some cases. I've also had a chance to work with a number of companies on broadcast commercials and a few network TV spots. It keeps things interesting. I guess I haven't worked what anyone would consider a big budget Hollywood production yet, but I'm OK with that. I rather be engaged creatively on a project where I can have more input and impact. Maybe someday I'll make the jump to the big leagues, who knows...

R. What advice would you give to young individuals wanting to pursue your art?
JW. I would recommend to anyone starting out in film sound and audio post-production to give it some serious thought beforehand. It's not an easy career path. Long hours, countless revisions, and impossible deadlines are the norm, but if you hang in long enough and get to see your work projected in the theatre or on TV, it's an experience like no other. You have to live to make art and relish in the challenge of making the seemingly impossible, possible.  Do what you love and the money will follow if you're any good... sometimes. If not, then make your own luck, put yourself on the line and repeat, and repeat and repeat... and if you don't get bored or burnt out, then you probably made the right career choice.

R. Tell us a bit about your current work? What are you doing now?
JW. Right now, we're shooting and producing a documentary about UFOs and alien encounters in the US. It's exciting because we've been able to meet a lot of interesting people and learn from them. It's a huge project but the stories are so intriguing, it doesn't really seem like work. I also just finished up doing location sound on Cameron Romero's Radical, a feature film about the final days of violence in Egypt and the American Press. Additionally, I'm involved in shooting and editing a number of photography projects at the moment.

R. In your line of work do you see a lot of dramas unfold with high profile actors? give us the dirt...
JW. Luckily, in sound you don't have to deal with a lot of the dirt you see (we have directors and producers for that!!) Most of the crew and cast I've been able to work with are super cool.But there are always a few rotten eggs in the bunch sometimes. I can't name names, but on one production a fairly well known actor came on set for their first day and essentially started bashing on what everyone was trying to do. Seriously, we we're doing a $100.000 film and he was getting almost 10K just to show up for a few days and he started screaming at everyone on the set about how he was the only true professional on set, and about how he didn't have time to be there. Well, then why did he take the job! Stuff like that burns me up. If you're going to have that attitude then please don't show up.

R. When you end your day after a long shoot, what artist/band do you chill out too?
JW. Depends on the mood...I really like A Perfect Circle, The Scientists, Billie Holiday, NIN and a fair amount of classical when I get the chance. Another band I'm getting into recently is Ashes Divide, it's Billy Howerdel's new project.

R. What is the one thing about your job that makes it worthwhile?
JW. Seeing it all come together in the mix. When all the sound drops out and you hear whispered dialog on screen and then a collage of sounds comes at you from every direction...yet, you can still hear every detail. That's when it all makes sense. When you lose yourself in the movie and mix and everything meshes at the board. That's when it's magical and surreal to know that you were a part of making it.

R. The Mayan calendar predicts that the world will end in 2012. What will you do to leave your legacy?
JW. Well, if the world ends, I'm gonna be pissed because I feel like I have so many more things I want to accomplish in this life. I want to travel, photograph the world and feel like I did something that mattered to someone. Until then, I'm going to continue to create collaborative art and make films for the challenge and love of it, have fun with my girlfriend, my dogs and try to smile at the end of the day, knowing something great could happen tomorrow.