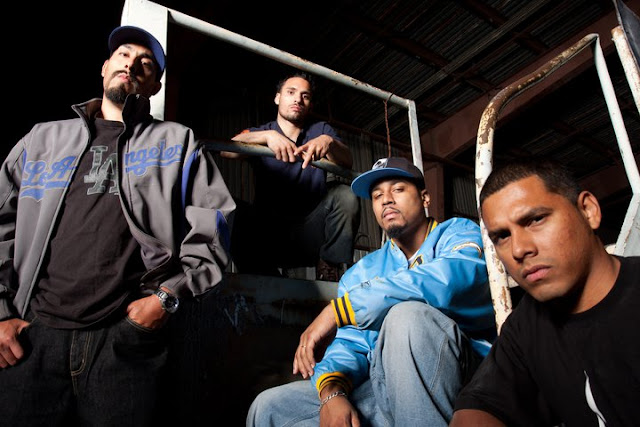 The Antagonist were formed originally at Woodrow Wilson High School in Long Beach CA. While at the time the group consisted of as many as 10 members at one time, throughout the years the group has been condensed to the members that currently exist, and who have existed from the beginning.

Arsin, Tony Rome, Hennessee, and Ace make up the four members of the Antagonist. Hip-Hop was is and has always and will always be a major part of the faction. The Antagonist explain that being an Antagonist is not just a crew, but a way of life, as "being the opposition" to what mainstream society considers "popular" and "trendy", but not always the enemy.The Antagonist maintain their style of rap is a combination of westcoast gansta music and heavy underground basement, to which they cause they called "Westcoast Grimey"music.

Revolution hooked up with the fellas from The Antagonist to discuss all the HYPE behind gangsta music and get scoop on what rhythms they're are working on.

R. Gangsta Music has come under much scrutiny with HYPE that it promotes bad behavior? Whats your take on this?
ANGT. Gangsta Hip Hop doesn't promote violence. Just like any form of music, it's just the way artists express themselves. The life of a gangster is filled with a lot violence, therefore the songs they make talk about violence, but the way someone interprets them, is completely up to them. Even in Pop or hip-hop a lot of that music talks about drinking and doing drugs, but that's just the artist expressing themselves. It doesn't necessarily mean you should go out there and do all things. If people say that gangster rap promotes violence, that just shows how easily people are influenced by words, and are no different than those who follow cults and group that are out to hurt people. Luckily, most people just see it as form of entertainment.

R. How much of your music is influenced by your personal life?
ANGT. Music period is influenced by our personal lives because art should always imitate life and not the other way around. Imagination is a big part of art, so we allow ourselves to create stories in our music, but for the most part hip hop itself represents the struggles and triumphs of the lower class community.

R. You and the fellas are much inspired by which artist or music?
AGNT. Mostly gritty yet lyrical artist such as Wu-Tang, The Lox, G-Unit, Jedi Mind Tricks, Army of The Pharaohs, Slaughterhouse, D12, etc. But our music touches on all kinds of hip hop, and even draws inspiration from other genres like Heavy Metal Rock, Classical, Soul, Funk, Alternative, etc.

R. What rhythms are you working on now?
AGNT. Currently we completed work for the "Still Tha A" album, which is slated to drop early next year, and we are dropping our mixture "Off The Chain Mixtape Vol. 2- No Breaks"before the while the fans are waiting. We are planning on dropping solo projects after "Still Tha A" so we will keep you posted on the news.

R.We have seen Rap music evolve over the years, would you say its better now compared to older style Rap?
AGNT. Better and worse. Better because like anything that's good, hip hop has evolved. Before hip hop was limited to loops and breaks, and only was available for the local urban community. Now, hip hop is a part of the Entertainment industry in general, and the culture has influenced not only most aspects of lives in America, but also across the globe. But it has gotten worse at the same time because now  the industry has turned into a cash cow, a gimmick of sorts. Before you truly had to be an artist, which meant being a true MC and rapping about topics of substance, with the occasional flash here and there. Now, it seems as though if you don't have a catch, like some sort of dance, or way of dressing, or some famous saying, you're not even sought out by labels. True talent has always only been part of being a known artist, but now it seems the "talent" part is fading and becoming a smaller part as time passes.

R. When you're not rapping poetry, what music other than rap are you listing too that's on your play list?
AGNT. We still keep our ears peeled to the underground sound, but definitely like the tunes of Archive from London and Portishead.

R. If you had to bust out a tune on stage with any rapper of your choice who would it be and what would you sing about?
AGNT. Of course it would be Snoop Dogg, along with Tha Dogg Pound, Warren G, and if was still alive, Nate Dogg. We would definitely make an anthem for our hometown, Long Beach, CA.