Swirl of a Time 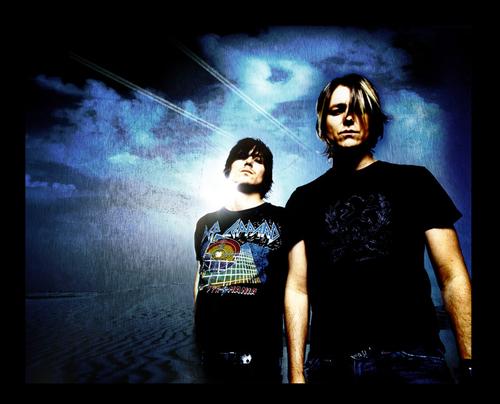 The Jacksonville-Florida based alternative pop duo Swirl 360 are a tour de force, led by brother Kenny and Denny Scott. They were at the top of the charts in the 90s with their album "Ask Anybody". Their hit song "Hey NOW NOW" became a top 5 hit on the radio airwaves worldwide.


With much success came, also the opportunity to have two other features songs appear on the movie of National Lampoon's Van Wilder. After a hiatus time apart the brothers rejoined again in August 2007 taking on a new name calling them "Echo Jet".

Jet succeeded and went on to have a top 40 hit on HOT AC in the summer of 2008. With the hit single "Wave". They continued to work on personal projects through songwriting and film productions.

In October 2010, the brothers joined forces again releasing a new EP titled 4, featuring newly recorded tracks. They also released a compilation entitled, "Echoes from the past" which contained several demos from Echo Jet and a new single "Rise Over" in March 2011.

Revolution caught up with brother Kenny Scott from Florida to talk about their projects and their view on music today.

R. You and your brother Denny have returned from a hiatus period. What projects have you been on?
KS. Mostly songwriting projects. After doing it for so many years... we decided to take a backseat as artists and focus on other artists. I've been doing a lot of producing/mixing as well. I built a studio in my home in Florida and I work from there. My brother and other songwriters will fly in and we do like a week of writing. Its like a songwriting vacation so to speak. It's been working out great.

As for Swirl 360, Denny and I put out an EP last October called 4 and it's done really well. Swirl has a pretty solid fan base, so we plan on doing another EP next year. Our catalog is online everywhere.

R. At the height of your career there was still some stability within the record industry? How do you feel about it today and what's your take on where it's going in the future?
KS. Tough question. It's hard to say where it's going to from here. Two things have really changed for  artists today. 1. We've been giving the tools to make records anywhere we want. Home Studios are everywhere. It's pretty amazing. DAW is the word. 2. You don't need a label to distribute your album. With outlets like tune core & CD baby, you can put your album online anywhere. And with You Tube,  Face book, & Twitter... you can reach millions people letting them know about your music. The artists/bands can be self-sufficient.

Its pretty cool because the labels have to start over . It's almost liked the early days when a label would just release a single. One song, its now back to that. I really do miss the concept of an album. Holding the artwork, reading the lyrics, letting the album take you on a ride. It's all fast food now. Kids download the single and then they are on the next one.

R. The world is changing and music has evolved as we well. Has reality music shows like (American idol) killed the radio star?
KS. It sure hasn't helped it. To me its like cutting in line at school. You have to earn it. Work hard for it. Again, it goes back to that fast food thing. Lee Dewyze won American idol. 40 million people voted for him. His album comes out and sells 80,000 copies, label drops him. What's wrong with this picture? There is this place in LA where all the young actors would come and stay when they first got to Hollywood, Famous apartment place. Now, it's filled with kids from all over the world wanting to become "famous" on a reality TV show. They have zero talent, just want to get on some reality show. Pretty funny.

R. From Swirl 360, you went on to become Echo Jet, Tell us what brought about the name change?
KS. Denny and I were on our 5th album deal. We got the big budget and felt like maybe it was time for us to start over. Stop hanging on to the past and start a new. Once the album was done, we had our new  band and we had the 1st single ready for radio... it felt great. We were ready to take on the world. Plus, we'd had a crash course in being rock stars. We knew what to do and what not to do. Our single Wave went Top 40 on Hot AC. Unfortunately, it wasn't as successful as Swirl... but that's okay. Wasn't meant to be. We  can have hit songs  with other artists doing them...right?

R. You've managed to stay afloat with songwriting and scoring music for films, is this something you enjoy better than being in the public eye?
KS. Denny and I have learned that it's about your work you send out into the world. Not being twins in a band. It always felt like the focus was on the twin thing and not on the music. It took its toll after a while. I'm not going to lie, at the height of it all... we loved being rock stars. Who wouldn't? But I love where I'm at right now, Its back to the music. People know us because they heard our song and they liked it, not because of our face. Its how it should be.

R. Earlier on in March 2011 you released an EP titled 4, what was the response from your fans?
KS. The response was great! Our fans overseas rock. This song called breather really sparked a wave for the EP. In 2002, we had a song in the movie Van Wilder called Okay and it really connected with people. Just exploded online. You can find a lot of people on you tube covering it. Now, people are saying Breathe is Okay too.  Denny and I have pitched that song to a few artists. Mark my word... someone will cut it. It's just waiting to connect. I can feel it.

R. When you're not writing for other artists or films, tell me what artist or band is playing at the top of your playlist?
KS. Right now its the new Cold Play record with a little One Republic mixed in. Ryan Teddar is my hero at the moment. Monster Producer/songwriter.

R. The Twilight saga has become a big sensation, a movie that  has the iGeneration in teen hysteria... You and Denny have been asked to write  the feature song for the next pilot. Tell us what song would you write that best resembles the love between a vampire and a mortal?
KS. Hmmmmmmmmmm. Well, I love the fact that a vampire sleeps all day and is up all night. You could play that up with "I found love in the dark". I've got a song going with an artists named Robert Elias and it's called "When the night calls". The first line of the chorus is "When the night calls you'll find a way". That could work. Lol Maybe you can pitch it to them when its done.