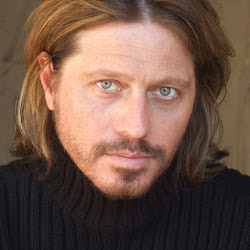 Mark Atienza, a Hawaii native, got his film start as the young "Roy Hobbs" in The Natural with Robert Redford, to later while attending school in Hawaii getting a chance to suit up and surf in the movie Point Break. He moved on to star in The Whirlwind, Statistics, and You Always Stalk the Ones You Love with Scott Caan and James Franco.

Atienza took a chance in early 2010, by putting both his creative and directing talents to direct his first feature film, titled rounds, which features an ensemble cast of new and established talented actors.

Rounds is a film that takes you into the personal lives of three main characters who are in search of life's answers. Atienza doesn't waist any time and gets to the gore of the story, one that his audiences will relate well too. His directional debut is outstanding and personal. Atienza the surfer kid, has come a long way from the ocean breaks of Hawaii and the film world has a lot more to see…

Through a mutual friend, I had the pleasure of meeting Atienza, an unassuming softly spoken guy who was very warm and approachable. We later hooked up for a personal meeting to discuss the success and making of rounds...

R. Firstly, congratulations, on the release of the film and all the outstanding reviews and acclamations. What led to the inception of writing and directing rounds?
MA. Thank you Alex. My producer Virginia Perfili had seen my previous film and wanted to do something smaller than what she usually does. I pitched her "ROUNDS" which was about security guards at the time, which then morphed into these guys, just going thru the same routines, with just life happening around them. You know living in Los Angeles and being part of this business (music, film, entertainment) you find yourself waiting for certain things to happen and while you wait for the stairs to align, there is this whole other  thing called life. My producer didn't know that, she was expecting me to deliver this raunchy comedy about security guards and got this story about life. Luckily she gave it a go. My other producer Craig Wilkening was a great bouncing board as far as ideas, he really helped sort out good ideas from lame ones. They were a great team.

R. What were some of the challengers you faced between the three roles you played; The Actor, The Writer and The Director? 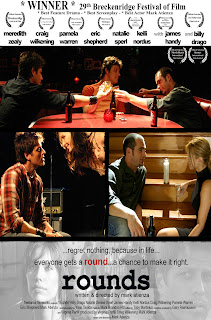 MA. It definitely kept me busy. I really spread myself thin while wearing all three hats. I had to answer three times as many questions. One major challenge was as a producer, the first location was in a building that was starting the demolition on the floor right below us so sound was compromised and we had to move locations before we even got our first shot off.  The next day was sun poisoning, the next two days were shot on the two hottest days of summer on a basketball court in a park. Actors, crew etc..all burnt to a crisp. As a director, knowing I had missed something, the having to schedule time to go back and pick it up. There was also the time our head of sound dept, didn't show up because his cat was sick, which was OK but he never told anybody and we thought maybe something bad had happened to him and lost a whole day of shooting till we finally found him-his brother kicked his apartment door and found him in the apartment watching TV with his cat. I look back and laugh at some of the obstacles we overcame.

R. Your character in the film is Jensen, a kid with all the luck, yet the envy of his friends. You play the go- between guy and get caught up in much of their personal struggles along with your own. How much of Jensen is a reflection of your own character?
MA. A little and a lot. Jensen is the culmination of all the coolest musicians, surfer traveling nomads I have ever had the privilege to know. One in particular was Ray, Ray was exactly like Jensen with more of a temper and short fuse. Super cool, loyal good friend, but you do any type of injustice to anyone he cared about, watch out. He was the type of friend we have all had at one time or another that you never forget.  Myself, I like what Jensen stands for, that kind of "live in the moment" type thinking, yet again Jensen has money (at a cost) and not everybody can live that way because of it. Sometimes I feel like the go between guy with friends and, sometimes I am the loneliest person on earth I guess it's the price or struggle of being An ARTIST (I am using my cheesiest dork Hollywood accent when I say that). HA!

R. The film takes us into the personal lives of characters that many of us can, or have encountered. Is this a subject that we will continue to see in your future films? And who are your favorite directors?
MA. Yes, one of my favorite genres of film is personal journeys or dramas. I don't put myself in this category of filmmakers yet but some of my favorites are Cameron Crowe, Robert Redford, Neil Labute, Darren Aronofsky, ahh so many to mention.

R. Lets imagine Ernest Hemingway, Woody Allen and yourself collaborating on a project. It will be a masterpiece that the film world has never seen. What kind of film would you make, & what character would you play?
MA. Wow, tough question. Probably something on a coast somewhere near the sea. A love story, cure for a rare disease, race against time, lots of banter and a tragedy. That about covers it. Pretty vague huh? Ha first off I wouldn't know where to start with those geniuses. Plus I wouldn't want them stealing all my good ideas…NOT! they would probably look at me and think "Who's this dumb ass"? And then steal my ideas…