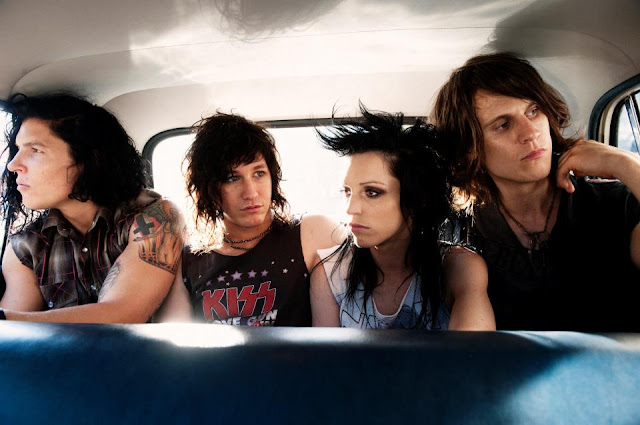 For 'The Art' it began in Newtown, Sydney where singer, Azaria, and bass player, KJ, shared a house and started a band. They quickly established themselves within the local underground scene under the name of 'The Follow'. Their edgy, fast-paced, live shows gained not only local success, but also caught the attention of Lee Ranaldo (Sonic Youth) who produced their first album and invited them to tour Australia with 'Sonic Youth'.

Riding on an early wave of success, 'The follow' decided to test the waters and try their luck in moving to America. With the move came new members, a new name, and an updated sound. Underneath the band name 'The Art', the band independently recorded and released a self-titled EP which was produced by Nick Launay of Nick Cave, Silverchair, INXS, Yeah Yeah Yeah's, and many more. They then took the road, playing SXSW and 40 dates coast to coast across the US. The Art's ever increasing fanbase saw them regularly selling out venues in LA such as The Troubadour, The Viper Room, Whiskey A Go Go, The Roxy, and Spaceland. Under great guidance from manager and  LA booker, ex Guns N' Roses manager, Vicky Hamilton, The Art were invited on their second US tour that year (15 dates) starting in St Louis, traveling to NY, and finishing in Austin Texas. The band called Texas their home while they recorded their first album as 'The Art' with producer Frenchie Smith (Jet, Trail of Dead, The Dandy Warhols).

Later 'The Art' wasted no time in signing a deal with Silverback Records and Insomnia Management and put the wheels into motion for the most recent album 'Here Comes The War' which was released in February 2011. In March 2012 The Art returned back to SXSW stronger and LOUDER than ever before. I caught up with the Aussies recently and chatted with frontman Azaria in the very cool Keltic neighborhood of Hilhurst in Los Angeles to talk about their comeback to the US and future plans.

R. Congratulations on your return back to the US, you've just come back from SXSW. Tell us what was it like this time?
ART. “ We played two unofficial show cases and one official show case, The Aussie BBQ (at Maggie Maes) in Austin, Texas. The crowds were just as loud as our band! Besides playing warm and well received shows at SXSW, we got to see Jesus and the Mary Chain, The Cult, Kasabian and many more bands in crowds of 200 to 400 people. SXSW is the only festival I know were you can see such world class bands in smaller venues. I had the best time with my band this trip in Texas before heading to LA for several more amazing shows.”

R. Whats the plan for the rest of the summer?
ART. “ We're half way through preproduction for our second record, and then we'll record it. So writing and recording the new material will be our main focus. Also there is talk of touring in the Fall, Faster Pussycat is one band we might support in America. We're also cutting a distribution deal for our debut album in America 'Here Comes The War’ and releasing it.”

R. You guys have evolved not only as a band but musically also. Where do you draw your inspiration from for your lyrics?
ART. “ Most of the lyrics are based on personal experience in relationships and reactions to the universe. Some lyrics are abstract paintings with layers of dimensions within them too. Collectively our band were weaned on early 90s rock and we have always been drawn to tapping into something beyond the mundane and bringing out the inner superhero playing live. We are also mutually attraction to Glam music, the T Rex and Bauhaus kind of glam and mood. You can peer into our world here:


R. What's your take on what's happening musically in the rock industry today?
ART. “ They say live Rock' N' Roll is dying (besides hipsters following the current trends of computers and synth) because of things like the Internet and Reality TV. These things affect sales of music, and are taking the mystery out of being an artist at the end of the day. It's up to the artists to make strong work and play powerful shows to rise above the cesspool of white noise. And who knows, if Jim Morrison or Kurt Cobain were born in the 80’s or 90’s and were in music industry today, maybe they would be on American Idol or using Twitter? Who knows… I'm just lucky to be playing shows internationally and recording records that I'm proud of. I just want to continue to do this with THE ART.”

R. The Art have been placed in a hot air balloon to travel around the world for 80 days, you have limited resources and and no gadgets. Like the original story that was published back in 1873, the band will encounter all types of challengers, turmoils, and rock n roll dramas. How does the end journey end?
ART. “ The journey would end with THE ART a little older and a little wiser with many memories, mistakes made and lessons learnt. Like when we realized on the tour that we didn't have enough fuel for the hot air balloon to make it around the world. So we were resourceful and use the alcohol from our rider as a source of fuel to complete our tour around the world. When we landed and completed the tour, we'd be ready to do it again, bigger and better then the one before. Next time we transcend beyond reality and fly out of space to do the UFO tour, we will be flying around the universe way faster then the speed of light in 80 days. See you there… x”

For more info on The Art: www.followtheart.com
Email Post