Skip to main content
Posted by Alexandra Juryte May 06, 2012

STORM on the rise 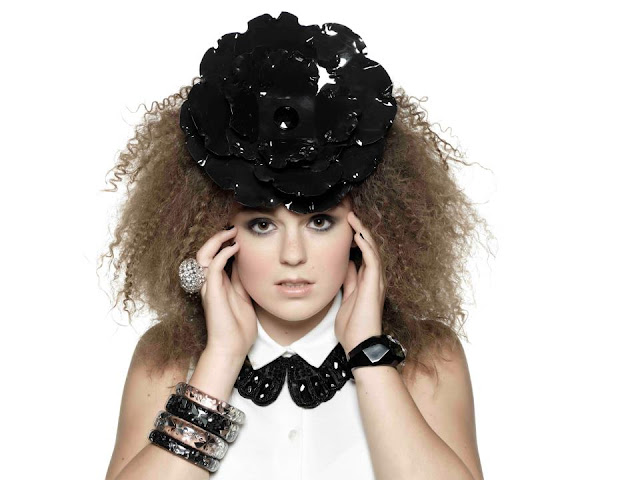 Scottish teen sensation Tallia Storm is a singing sensation. The soulful 13-year-old became a hit sensation whilst on a family vacation in Hawaii January (2012), when she bumped into Sir Elton's partner David Furnish and asked him to pass on a letter and a copy of her CD. The rest as they say is history...

Since then, music icon Elton John is raving about 13-year-old Tallia Storm whose original name is Natalya Storm Hartsmann. A bold daring, and stylish singer who has already captured the attention of fans internationally and is now heading to the U.S.

Opening for Elton at his concert on June 10th (2012) at The Falkirk Stadium, Falkirk. Tallia has been mentored and motivated by Sir Elton John, who is guiding this young singer on the verge of stardom.

With a deep soulful signature reminiscent of the Motown era, Tallia can belt out strong melodies with an R&B and jazz vibe that simply defies her petite frame. A surprisingly grown up sound from a very talented little lady. I had the privilege to have a one-on-one with the talented star!

R. For such a young kid you have a voice and maturity which surpasses many artists who work for years to achieve what you have. Tell us, as a child did you have any formal training?
TS. No I have never had any formal training in my life-I just love singing, it's what I do. I was in the choir at school for a number of years but the music teacher kept asking me to 'stop singing pop' saying that 'it wasn't a pop concert' so eventually I had to leave the choir as my signature is just my signature-I don't know how to sing any other way. I recently went to see a wonderful lady in New York who is a vocal coach who literally taught me how to breath properly that was the first time in my life I had any formal instruction.

R. You were on holiday when by chance you bumped into David Furnish ( Elton's partner) handing him both a letter and a copy of your CD. Little did you realize that fate was about to change when Elton called you up the following day to speak with you. Tell us what happened next?
TS. Well, we had to fly home via San Francisco and we were going through security at the airport when the mobile rang. I could hardly hear as my brothers were running about. My mom was stressing and the security guard shouted to turn the phone off. I heard this voice say 'Hello it's Elton here', I just stood there in total disbelief. The phone lost reception, then the battery ran out, we were freaked out and my sister swapped sim cards to her phone and eventually once the through security we spoke properly. He was so nice, he had explained that he had let this whole band listen to my tracks and his backing singers, he spoke about each of the songs, the thing he loved about them. It's funny as we always have this impression of famous people and what they would be like, but he was just so down to earth, passionate, enthusiastic, encouraging and warm. I could hardly sit on my plane seat for the next 11 hours, we were all so excited. My wee brothers Zachary (aged 5) and Johnnie (aged 7) were confused as to what was going on until I said  'That's the Bennie and Jet's guy' which they totally got it as my mum plays that and then by the time we got back to Scotland later that night he called and spoke to my mum. Even now, when I think back, part of it is still surreal and seams almost like a dream. I'm just so eternally grateful to Sir Elton & David for taking the time and giving me the chance of a lifetime!

R. Elton stated the following 'She has the potential to be bigger than Jill Scott, Erika Badu and Joss Stone the lot'. These singers have been in the recording industry for several years now and their songs often depict profound heart break and raw emotion. How do you feel being put there with these great soulful singers?
TS. Look, it's an incredible complement and seriously flattering, and in all honesty a little surreal as these people are a total inspiration and icons to me. I just do my thing, not sure where it comes from but what I do know is that there is no place I feel more comfortable than in front of a microphone. I also appreciate that this is a journey which I am totally prepared for. It's about dedication and hard work. I would love a career in this. I have long term game plan, to be up there alongside magnificent voices i'm clearly on that journey… no matter how long that journey takes!

R. June 10, 2012 is just around the corner and you will for the first time get a taste to perform in front of a large audience at The Falkirk Stadium . No doubt it will be spectacular, considering you're the opening act for Elton John's event. Has the realization hit you yet and what do you anticipate will happen from here?
TS. You know the only thing I am concentrating on is my set. I actually have my school exams in mid May so I have to study hard for those also. But I am not thinking about all the 'what ifs'…' I almost feel as if I can't let Sir Elton or David Furnish down, as he was kind enough to pass on this random kids CD to Elton. They've given me this huge opportunity and this is my chance and I just can't blow it, so it' all about rehearsals, rehearsals, rehearsals, early nights, healthy diet and focus. My mum is big into yoga so i am trying that and I must say it is helping. I have a small circle of friends but I've banned them from hanging out at my house till the concert is over! Then we'll get together in my room and just SCREAM!!!

R. On a personal level what are your own musical influences from past and present? Do you have a favorite artists right now that you are into?
TS. Sir Elton was bang on. I love Erika, Jill-so many really. I like Mary J Blige, Trey Songz, John Legend, Stevie Wonder, Estelle, Chrisette Michelle. I did my first ever cover to one of Chrisette's songs. I also love Jazz as my dad plays jazz piano so I have been brought up listening to Ella Fitzgerald, Coltrane and Dizzy. Right now I am loving Jennifer Hudson's 'Think Like A Man' with Neyo-I love the video too!

R. If you could choose any Divas to do a rendition of any classic song who would you choose as your line-up and what song would you bang out for the world to hear?
TS. Why just diva's-my dream line up would include dudes too. I'd love to do a soul/R&B version of Elton's 'Your Song', like nothing you've heard before, a totally new funky arrangement so we could have Elton on piano, Stevie Wonder on harmonica and-and I would share the vocals with Elton, myself, Mary J Blige and of course Stevie. Wow can you imagine, that would be the ultimate for me. i would need some sort of mini platform in the middle though as I'm quite wee and I would insist it made me the tallest though, ha ha!

To see and hear all about Tallia Storm: http://www.talliastorm.com
Email Post