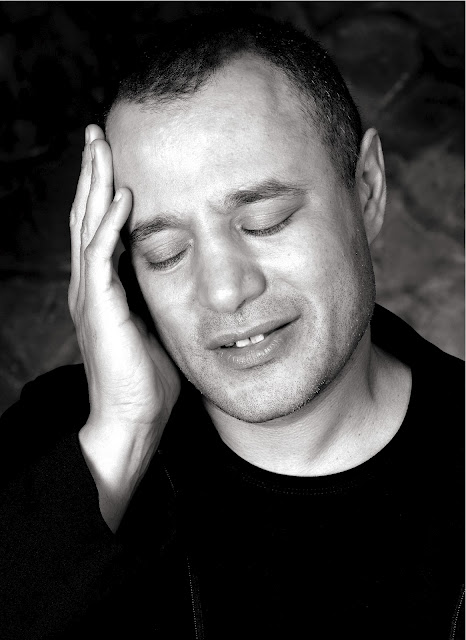 Moncef Genoud's keyboard ability is delicate, sensual and downright "brilliant"!  He's an abstract pianist who brings complex twists to original standards as well to his own compositions. A master of setting moods, Moncef was born in Tunis, Tunisia and was blind at birth. Flown to Switzerland to receive treatment on his eyes at the age of 2, he was adopted by a Swiss family shortly after. At 6 he began to take piano lessons, strongly encouraged by his adoptive father, a big Jazz fan who would often play records by Louis Armstrong or Fats Waller at the family's house. Blessed with a remarkable auditory memory that allowed him to learn and replicate any piece by ear, Moncef started to develop his own style. In 1987 he obtained a music teacher's degree from the Conservatory in Geneva, where he still teaches Jazz improvisation today.

A professional musician since 1983, Moncef quickly asserted himself as one of Switzerland's leading Jazz artists, thanks in part to the body of work he assembled with his Trio. In the course of his career he has played with the likes of Bob Berg, Alvin Queen, Reggie Johnson, Harold Danko, John Stubblefield,  Joe Labarbera, Michael Brecker, Larry Grenadier, Dee Dee Bridgewater, Bill Stewart, Idris Muhammad, James Cammack, Jack DeJohnette, Tom Warrington, Scott Colley, Sangoma Everett, and Billy Brooks, among many others.

2005 began with Moncef signing an exclusive recording, publishing, and management deal with Los Angeles-based Rollin' Dice Productions. His first project for Rollin' Dice was AQUA, which featured Moncef along with Michael Brecker, Dee Dee Bridgewater, Bill Stewart, and Scott Colley. The Project, recorded in New York City, was produced  by C. Chill. It demonstrated the level of Moncef's maturity as a Jazz composer, arranger and performer.

Moncef, is one of the leading spearheads of European Jazz and currently one of only two Swiss Jazz artists to be signed to a U.S. label. (the legendary Savoy Jazz, via Rollin' Dice Productions). Having released 12 albums as a leader, Moncef has performed on some of the worlds's biggest stages, such as the Montreal Jazz Festival, the North Sea Jazz Festival, New York's Lincoln Center, along with iconic venues in Africa, Asia, and Europe. His fame continues to grow, thanks in part to his album AQUA (2006), featuring luminaries like Michael Brecker, Dee Dee Bridgewater, and the award-winning road movie Return to Gorée (CAB Productions, 2006), in which he's featured with long-time friend and collaborator Youssou N'Dour, who also appears on Moncef's latest album entitled Métissage (2011).

An avid traveler who loves to discover new places, cultures, and flavors, Moncef is returning back to the U.S. with a summer tour and looks forward to reaching even more people with his music, and while taking centre stage.

R. You have shared the stage with some of Jazz's leading greats. Tell us what has been one of the highlights so far in your music career.
MG. I've had many, but I think the greatest moment ever was my recordings session with late Michael Brecker. He was a true idol of mine and I had been trying to work with him for several years but couldn't concretize a project, mainly because I was based in Geneva and he was constantly touring all over world. That's when I got signed to Rollin' Dice Productions by C. Chill - who's been my producer and manager ever since - and he was able to fund, produce, and release the album AQUA. We recorded the entire album in New York in two days and the sessions were truly one of these magical moments when all the stars align. Everybody was on the very stop of their game and we recorded tune after tune flawlessly. Keep in mind that the musicians (Scott Colley on bass, Bill Stewart on drums, and Brecker on tenor sax) had never played my compositions, we just went through the sheet music and the arrangements and pressed "record." We never did more than two takes, yet we recorded so much material in two days that we weren't able to put it all on the CD. It was fantastic, a dream come true for me to see the great Michael Brecker engage in my music with as much passion and skill. As it turns out, this was one of the very last recordings he made before his untimely death a year later. I'll never forget that experience or the remarkable person he was.


R. Jazz is inspired by ones passion. A language that is sometimes intimate, profound, confusing but generally layered with life's experiences. How much of your own music would you say is a reflection of your own personal experiences?
MG. I would say some of it but not all. It's true that several personal events that punctuated my life inspired some of the music, I can notably ink of the album Waiting for Birth, which I composed in anticipation of my first son's arrival. There was also my father's passing, I wrote, "Métissage" and "Chermignon" at that time. "Chermignon" is the name of the village in the Canton of Valais in Switzerland where I found refuge and peace to deal with this loss. I felt this place had a soul, and it helped me through the mourning process. Writing these two pieces was like catharsis. You can tell that their mood is somewhat somber, "Chermignon" moves like a slow funeral march, and "Métissage" is a flight of lyricism where a bunch of emotions collide.


R. You embrace Jazz and African/Arabic rhythms to some of your arrangements. Did working with Youssou N'Dour inspire you to reconnect with your roots?
MG. It did, and it was a great experience to do jazz arrangements of Youssou's music, but his songs are primarily M'Balakh, which is a different style. I'm touched by all African music, but I guess my genes cause me to have a particular propensity for Arabic music, its colors, flavors, scales, etc. You can hear that influence in a few of my compositions like "It's You." I love instruments like the oud, and as a matter of fact, I'm very likely to explore Jazz/Arabic music combination in more depth on my next album.


R. Like many other genres of music Jazz has also, evolved over the decades. We have seen the introduction of; Gypsy Jazz, Punk Jazz, Acid Jazz, Urban Jazz to Latin Jazz. Whats your take on these styles? Do you enjoy them yourself?
MG. I respect them all, but Latin Jazz and Acid Jazz are probably the ones I find the more interesting. My style is usually defined as straight-ahead Jazz, yet I'm always curious to wander into new, exotic directions.

R. What's on the horizon?
MG. I'm looking forward to an upcoming West Coast tour this July, I'll be in Los Angeles and San Francisco [performing in trio and giving a master class. All Jazz fans in these two areas are invited to attend, I love sharing music with people. My producer and I have also started talking about our next album, I don't want to get too far ahead of myself but I can say that it's a very new direction and, as far as I know, something that's never been done in Jazz. I would also love to do another film project in the vein of Return of Gorée, the documentary I did with Youssou N'Dour and an amazing group of musicians that saw us travel to Senegal, the U.S, Switzerland, and Luxembourg.

R. Let us take a trip down memory lane and imagine for just a moment that the year is 1950. Tonight your a guest player at the renown Birdland club in New York's Upper West Side. The usual suspects and all the ladies are in the house. Charlie Parker, Miles Davis, Charlie Mingus along with Art Blakey are on stage and you of course will close of the the night. Tell us what tune will you play to end the evening?
MG. That's a fun question. I think I would play "Blue March" by Art Blakey and Charlie Parker's "Confirmation".

Moncef Genoud will be in concert in trio at Vitello's in Studio, City CA, on July 12th and 13th, and at Yoshi's in San Francisco on July 15th, 2012.
For details, visit:
http://www.vitellosjazz.com/event/moncef-genoud-trio/ and http://www.yoshis.com/sanfrancisco/jazzclub/artist/show/2773