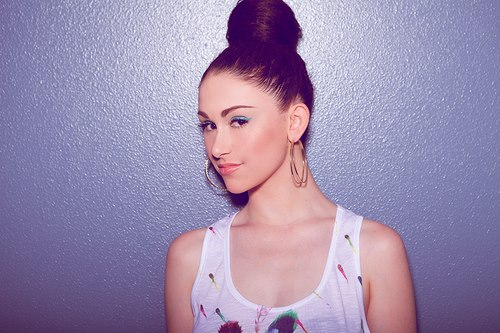 Sarah Anne Hackett is Canadian born and raised in Sault Ste. Marie, Ontario. When she's not on the road, she resides with her parents, younger brother John and their golden retriever "Mandy". Her love of music started from n early age when she was introduced to music classes at the age of 3. She joined a local dance studio when she was five and continued for several years while also taking violin lessons at age of 6. She started vocal lessons at the age of 10 and added guitar and piano by the time she turned 14. Music has been a part of Sarah's life for as long as she can remember.

Sarah's passion to become a recording artist was birthed at a summer camp in Burbank CA during the summer of 2010 where she met 10x multi platinum and Billboard Award Winning music producer Andrew Lane. She returned the following summer (2011) to work with Drew writing and recording music. Even though Sarah lived in Canada, her passion for music brought her back regularly to LA. Sarah made the final decision to stay in LA for the summer of 2012 to pursue her dreams.

With an added talent for songwriting, Sarah has been co-writing all of her songs. Early this summer Sarah shot a video for 1st effort "You Got Me Open" which was released Aug 2012.

R. Firstly congrats on your video "You Got Me Open". You've had  over a million views. Tell us how this video came about for you?
SH. Thank you so much! For the past year I have been working on artists development and the moment I heard the track I knew I wanted that song to be the one I did my music video to. I co-wrote this song and was extremely happy with how it turned out and in May I flew from Canada to LA to shoot the music video which was an incredible experience. I had a great team working on the video with me and had a blast filming it. I am really really excited about the response my single has been getting; it's a great feeling.


R. At just 16, how are you balancing school and a music career?
SH. School is a very important to me. Last year I was balancing my regular high school experience while flying to LA once or twice a month for a quick visit to work which was really hectic and crazy. I am currently working on online school which allows me to be flexible because studio life is very demanding and when I start touring I know that it will be demanding also. School is a priority for me and I do it in my spare time.

R. You've worked with Drew Right Records who previously worked with the Backstreet Boys and Hannah Montana. How did that encounter come about?
SH. I met Drew at a summer music camp the first time I came to LA. I worked with him on the first song I ever wrote and didn't have time to finish it so I kept trying to get a hold of him and I basically wouldn't take no for an answer. I knew this was what I wanted to do and he appreciated my commitment and enthusiasm so he invited me to come back.

R. What artists inspire you?
SH. I am inspired by a lot of artists for different reasons. Demi Lovato is one of my greatest inspirations because I grew up listening to her music and her music has been there for me for a long time. Her story is just incredible and inspirational. She has a great relationship with her fans and she is an INCREDIBLE performer; that is something I hope to achieve. The Jonas Brothers are also great inspirations of mine. I love their sound and I admire the fact they write their own material. They are all talented musicians as well as talented performers which I very much admire and respect.

R. So whats on the horizon for you?
SH. I am working on new material right now in the studio. My new music has a pop/rock sound that I'm really excited for everyone to hear. I want to create lasting music that is relatable to people of all ages and I want all my music to be there for people the way other artists' music has been there for me. I hope to have an album or a EP out in the new year and I also hope to be touring.

R. If you could do a duet with any artist who would it be and what kind of song would you do?
SH. Hmm that's a really tough question. There are so many people I would love to have the opportunity to work with. I don't know if I can can choose! I would love to work with the Jonas Brothers. They were one of the first concerts I went to and inspired me to be an artist and to write my own material so I  think working with them would be incredible, and I don't know what song we would do, maybe a ballad or a fun song? I don't know hahaha.