So Was The Sun 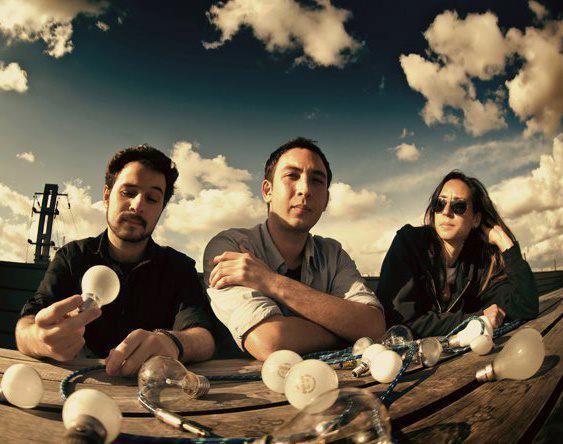 So Was The Sun is a three-piece indie/post-punk band from Paris and Compiégne, France. They were formed in 2008 by Palem Candillier, also playing for bands such as The Bree Van De Kamp's Tarah Who? and Fraulein. With Palem's personal compositions as anti-fol basis, the group developed a very hubris and noish sound that finds its origins in sonic Youth's records from the early nineties, in Them Crooked Vultures fire power, and in Joy Division's live bootlegs.

Bassist Yann Le Tallec and drummer Loïc Jallais join Palem, adding support to the singer's twisted songs. In 2011 the band released a self titled EP mixed and mastered by Twin Twisters's singer Hugo Cechosz (also known for playing and working with international pop and rock bands) which guide the listener through an odd musical land of guitar noises, messed up chords, aerobatic vocals, and ironic lyrics. So Was The Sun creates even more tense and drier landscapes with their second album, Dead Submarines, in 2012. They win several rock battles in North of France and tour in Northern Ireland and London, and play over thirty venues in France in a year.

After releasing their first videoclip of the their heavy-post-punk piece "A New Organ" with Henri-Jean Debon (who also worked with Sinead O'Connor & Asian Dub Foundation), they began to work on new material and plan to tour all over France, and even the UK again, this year.

Before the current line-up, various musicians have been part of the band's shaping, So Was The Sun's peculiar sound and musical attitude. This includes Tarah G. Carpenter, Pilal, Pedro Cavadas, Maxence Saint-Omer and Jonathan Marois.


R. If you had to categorize your music, what genre would it best fit? (Name up to three)
PC. There are many genres I could think of, we're part noisy rock, part stoner rock, part pop… people and the media usually use these genres to describe our music. But I like to say we play "heavy post-punk". We're mixing loud and powerful music with fast and nervous compositions, like in Joy Division, Sonic Youth or even At The Drive-In. And we're a trio, which means each instrument must have a real part to play, something to say in the song. So here we are: Heavy, melodic and "in-your-face."

R. What do you feel distinguishes "an artist" from just a musician?
PC. Today, if you want to be successful and an interesting musician, you have to be lyricist, a composer, a manager, a performer, and even a video maker, and care about visual stuff in general. There are lots of great musicians that just write or play, and they do it well. But an artist is to me, like a musician who sees his or her music as a whole. There are many other artists around (video-makers, graphic designers, etc…) around the band than can be useful to our music in which they can make our songs have a deeper dimension, and it doesn't have to be "conceptual" to be fine. That's what we tried to do with our song "Dead Submarines" giving it a visual background, a graphic state of mind. We'd also love to keep up the video work with some directors that we have worked with and who we have an appreciation for (Igor Rybaltchenko and Claudia Lopez Lucia's works). We also worked with Henri-Jean Debon for the single "A New Organ" which was quite interesting.

R. What was the first song that you ever sang? How did it make you feel?
PC. It was The Beatles's "Let It Be" or "Dig A Pony"I was either nine or ten at the time, as I loved all those 1970s records. I really enjoyed shouting like in those albums but my guess was, I sounded awful, since I was playing on my first acoustic guitar without plucking any chords. I thought that was the way you usually did it. But the most important, I remember doing a cheap recording on a tape, which meant I always payed attention to the fact that songs had to be saved somewhere, and played back and heard it again and again. Playing music and performing live have always come together for me and I believe it's still true today.

R. How did you become involved in the type of music you play/and the producers you work with?
PC. In 2007, I saw Sonic Youth in concert twice. "It felt like an electroshock! And I knew that's where I belonged, I could feel it in my blood." Same year, I discovered Joy Division and that was the start of it all… from then on I began to record noise material and my songwriting became much better and honest. I stopped trying to sound like other bands and songs I loved but instead found my own voice in music, which gave me total freedom. I understood I could also mix various genres and different kinds of noise I loved. Then, year after year I began to meet different people who helped me understand how "So Was The Sun" should sound like. The producers and sound engineers I worked with,  generally had in mind the same music influences. I'm glad to have worked and shared experiences with guys like Pilal, Olivier "Nonox" Romary, or Maxence Collart.

R. Why is PUNK music important to society?
PC. Punk is to me, something like being provocative and making a joyful mess in the global order. But it's also a way of saying, "nah, don't care" and following a "do it yourself" path in whatever happens. It's vital to have both possibilities in life, to feel involved and at the same time to disconnect in a hard way. Punk music created an alternative way to living and hearing music, alternative fanzines, handmade record sleeves, self - organization of your band & relationships… I love the spirit of it and more-so when I listen to bands like "Future Of The Left."

R. What's on the horizon for So Was The Sun?
PC. A new bassist, Yann Le Tallec has joined us in February this year. The band is ready and impatient to play on stage. We have a few gigs to come this spring, and we'll be touring from September in France maybe Northern Ireland and the UK. I've been asked by fans in the US to come and gig, this would be great because I would love to spend the summer working on new projects and directing new videos. Until then, we'll work on some new material and might record the last chapter of our "trilogy" in 2014.

R. What superpower would you love, and why?
T. The power of making days last for 48 hours! So that, I can do as many things as possible in one day. Or just rest and feel the spring coming... Fancy a picnic?