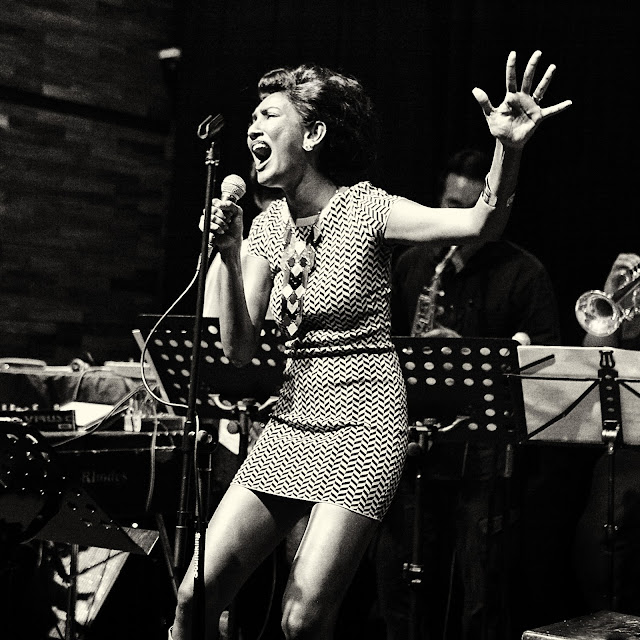 Malaysian born singer, songwriter, composer and producer, Poova is as multi-faceted as she is multi talented. Nominated for 3 VIMA awards and winner of best overall pop act at the VIMAs 2013, there is no doubting the international class of this amazing performer, from her own albums to collaborations with other artists, Poova is what Malaysia's international music scene is all about.

Poova has been performing as an original artist, since 2009 and debuted her original first album in her Ticket to Faketown tour 2012 backed by a 9 piece band, financed and organized under her production company Bumpertobumper Productions. Alongside this Poova works with corporate companies and has chalked up an impressive list of events and has sung almost everywhere worth singing in Kula Lumpur and is well known and admired by many in the Malaysian music scene, for her unassuming, down to earth attitude and ability to command attention from her audiences.

Poova has performed with The Jerry Felix Band after Malaysian Idol winner Jaclyn Victor moved to enter the Idol competition. Singing with the well known rock band, gave her a solid base that would soon help to develop the powerful voice she has today. Later she formed The PHD who crafted and blended their own mix of soul and funk angles on popular rock, jazz, soul, disco and funk classics. Later with Mafia Cartell they once again gave their particular take on classic rock, blues, disco and soul and again with album producing band Tokyo Blue alongside talented Japanese bass guitar sessionist Hiro and pianist and singer Ywenna performing Jazz instrumentals as well as jazz, soul, funk and disco from both the modern and retro scene, Poova has also performed with Fusion Factor and Giant Timeline, Gruvavenue and many others as well as giving many impromptu performances when out and about in KL.

R. When did you first start singing?
P.  I basically started singing as soon as I could speak, I would sing with my mom, to cassettes of nursery rhymes and I guess I never stopped after that, it wasn't long before I was writing my own little songs and playing instruments

R. How would you describe your music/art/entertainment for the public audience if they have never seen you before?
P. My music is a real mash up mix up of rock, soul, electronic, pop even RnB and hip hop get thrown in there, I am a singer songwriter composer and rookie producer, so my music goes however I feel. I have a strong soul voice so I'm told, but if a song I'm writing is a vulnerable or delicate piece I will sing accordingly. For the visual audience I am energetic and like to get around the stage, I love bright funky clothes and am happiest in my Doc Martens, there's nothing wrong with elegance too, I just prefer funky stuff to cocktail dresses.

R.What are your songs about? (what specific themes do they cover?)
P. I write about my life, my feelings, work, people around me, for example Faketown is a song I wrote about all the fakers we meet out there in the world, those who say something but mean something else or those that make promises but never deliver. Slaves is a song about my dayjob and how I wanted to be free from it to follow my heart and be an artist, Move Over is a very in your face statement song, saying, hey, I'm Poova, I'm here and I'm a force to be reckoned with. Take a listen to 4am and figure it out, a very personal song and written in one shot straight on the edge of my feelings.

R. What do you think your "biggest break" or "greatest opportunity" has been so far in your musical career?
P.  Whew, that's a great question, it's been more of a series of steps and a lot of hard work, winning best pop act at the VIMA 2013 awards was certainly a highlight in so far as recognition goes as an independent artist, I would really say it has been a series of opportunities that I have chosen to take, I try not to turn down possibilities, but then of course you also have to say "no thanks" if it's not right for you. I suppose the biggest opportunity or break was my husband telling me to do this and giving 100% support, having just one person who believes in you so much can make the difference between perseverance and quitting, when you start to get fans and have hundreds or thousands of people who believe in you is real rocket fuel for your passion and goals.

R. What do you feel distinguishes "an artist" from just a musician?
P. Well, I'd never describe any of my musician friends as just musicians, they studied hard or worked hard to be able to sit in front of an audience and play for them, they are really very skilled and in that sense what they do could be considered an art form, but I think anyone who is offering their original works to the world and saying, "this is me, this is what I have to say, this is how I feel" I think that is an artist, as you are creating art in an original form, I still think that if you are painting a house, you are a painter but not an artist, if you paint a mural on the side of that house of your original concept, then you are an artist. I think it's the step from I follow to I lead, actually every one of us has an artist inside, it just manifests in different ways or we are too shy to let it out.

R. How much creative control do you have over your own music?
P. Basically, I'm 100% in charge, I write the melodies, the words, structure the feel of the song, I'm even starting to produce my material now, it's really only the live performance where I have a backup band that will get together and look at how we can present the music live, it's great from the perspective that I'm free to say what I want how I want to say it, but it's tough being independent in the sense that you are doing everything yourself from PR to production, from funding to dealing with clients for performances.

R. What has been the biggest challenge for you or the group?
P. Getting people to listen, to like and to understand who I am and what I'm about. Here in Malaysia there is a lot less scope for English language singer songwriters because the majority of music in the Malay language. However, I just told myself, well hey, I'll look at the world as a platform and see who's gonna listen, then figure out how to access that audience. We have access to a lot of outlets for music and networking, it's just about getting people to notice you and leaving a strong enough impression to keep people interested in your music and maybe even get them telling others about it.

R. What's on the horizon?
P. The world is on the horizon, I want to get out internationally and start performing to different audiences all over the world, I want to make more music and be more in control as a composer and producer and I want to develop my artistry and skills, I'd love to perform at some of the big festivals around the world and I want to use this music as a platform to see and experience more of the people and cultures of the world, no better way to do that than whilst doing something you love.

R. Art & Music has an impact on both young and old. Everyone loves a celebrity, so what advice do you have for the youth of today?
P. Art and music is around us all the time, love it, cherish it, respect it and the people who bring it to you and encourage those around you to succeed in being different and in showing what they think and feel through art forms, don't push people away because they're different, if you see an artist on stage at a concert, you are enjoying the fact that they are unique, that's half the reason you are there, but also try to seek out the art in other cultures, languages, ethnic groups and religions, there is a mass of beauty out there that slowly disappears over time, the world is much smaller now than 50 years ago and information is so accessible we can learn about almost every hidden corner and secret at the touch of a button. Lastly, try not to see the world through that touch of a button, go out and experience it for real, I saw Angkor Wat at 5am at Christmas 2012, trust me, you need to be there when the sun comes up and it's reflection appears in the pools in front of the temple... that was art..